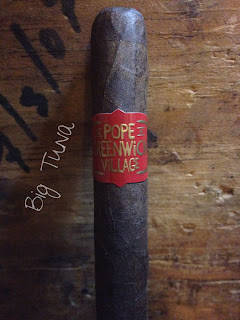 In late February, Smoke Inn and Drew Estate announced that they would be coming together to create the 11th Microblend release. The cigar would be called The Pope of Greenwich Village, and it would be a unique blend from Drew Estate. To no surprise, there was a lot of excitement that came with the announcement and it was the third Microblend Series to be released in under a year as Smoke Inn had the Bunker Buster and Pactum in the second half of 2020. For the most part, I have been a fan of a lot of the releases from the company, but there have been a couple that really stood out for me. Pactum and El Hijo are simply fantastic, and the same goes for the SI-15 Maduro. Teaming up with Drew Estate is going to bring a lot of positive attention, but with that comes a lot of pressure. Today I look at The Pope of Greenwich Village and see how it smokes.

With a total of 15,000 cigars produced, The Pope of Greenwich Village is the 11th release in the Microblend Series. The cigar is made by Drew Estate, and it is made at la Gran Fabrica Drew Estate. The cigar comes with a Mexican San Andres wrapper, a Connecticut Stalk Cut Habano binder, and it has a filler blend that is a combination of Brazilian Mata Fina and Nicaraguan filler tobaccos. The cigar is defined as a petit lancero, and it measures 6" with a 40 ring gauge. The petit lancero sports a wrapper that has a slightly oily wrapper and it has a very fine sandy grit texture overall. There are very few veins present overall and it has a coloring that is faint maduro. There is this dark brown coloring and the wrapper comes off as seamless. It is a firm cigar overall and it has a rich aroma that is showing strong manure, syrup, and rich earth notes. The foot is showing those rich earth and chocolate notes and it has a nice richness overall. 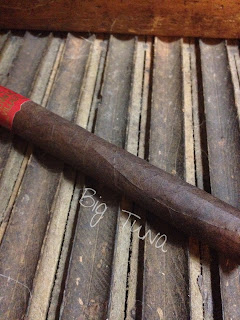 The cigar opens up by delivering some nice syrup flavors, and it has some chocolate and rich earth notes on top of that. I am picking up some tobacco and leather qualities, and it is producing some Asian spice notes which are giving off some anise, cinnamon, and nutmeg flavors. It is a rich cigar and there are a lot of complimentary flavors that come with that. The cigar is delivering a flavor profile that is medium-full to full, and it has a nice body and strength level on top of that. Everything is working off of one another well, and it is balanced and filling cigar. The construction is simply terrific on the cigar and it is showing a burn line that is razor sharp with a nice ash on the end. The ash has a solid charcoal coloring and it is producing a great bit of smoke with each draw on a cool finish. 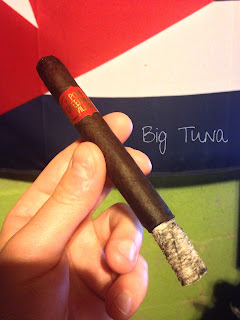 When I get into the second third of the cigar I find that the syrupy qualities have died down and it is showing more of the Asian spice notes from before. I am picking up some noticeable clove and nutmeg qualities, and it is followed by some oaky flavors with some rich earth and chocolate. The finish is of tobacco, and as I said earlier, this is a filling cigar. I would classify it as being medium-full to full again, and the strength and body are right at that medium-full level. There has always been that theory that more flavors and body are delivered in a larger cigar, but the Pope of Greenwich Village disproves that theory with comfort. The construction remains top notch in this third and it is showing that even burn line with dark charcoal ash on the end. The draw is cool, producing a plethora of smoke, and it has a great finish. 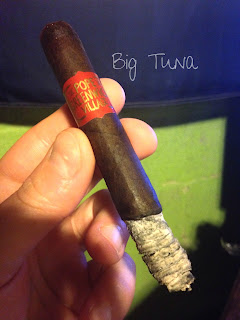 As I move into the final third of the cigar I find that it continues to show the flavors that were present in the second third, and it is not as syrupy, and a little less in your face. There are some great cocoa notes and rich earth qualities present, and it has a nice balance of spice and wood flavors. I am picking up soft oak and cinnamon notes, and it has a finish of nutmeg and soft anise. Overall, a flavorful cigar and I would classify as being medium-full to full. The body and strength continue to smoke at that same level, medium-full, and it is a cigar that has a lot of complexity and depth because of that. You really get a lot of the wrapper with this cigar, but at the same time there are some filler tobaccos that make themselves present. The construction remains perfect throughout the final third and it is showing an even burn line with that solid charcoal ash on the end. The draw is cool, and at the end of each draw is a lot of flavors and a nice bit of smoke. 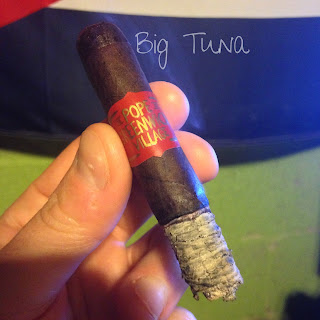 Pope of Greenwich Village is an interesting release, and it is a blend that shows some characteristics from previous releases. There are some aspects, the syrup aspects, that remind me of the Dogma, and then are some traits that make me thing of regular production Undercrown and T52. They all play off of one another well, and the result is the Pope of Greenwich Village. Overall, the cigar delivered a solid flavor profile that had a lot of complexity, and there was depth and some transitioning throughout. The construction was simply fantastic as well, and because of that you could not ask for more in a cigar. I thought the size was a little weird, I would have preferred to have a smaller ring gauge or even a larger one, but they probably could not make the blend work in those formats. Drew Estate has never been able to make a true lancero or petit lancero, so I would have gone with a Lonsdale overall. With that being said, I think it is a fun release for Smoke Inn and I am surprised they still have these in stock. I give the Pope of Greenwich Village a solid 88 rating, and it is nice to see Drew Estate do an exclusive that is not a line extension you could say. 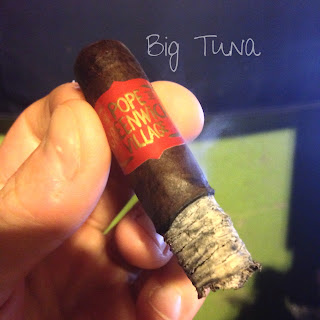 *Cigars for this assessment were provided to Seth's Humidor by Smoke Inn Cigars.