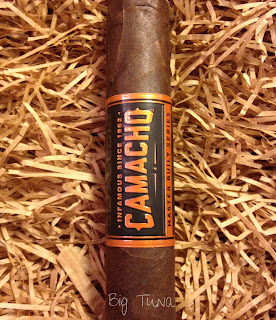 A few months ago, Camacho announced their newest cigar and it was a cigar that fell into the recent trend which the cigar industry is currently in. The industry right now is all about craft beer and bourbon, and because of that manufacturers and brand owners are getting as creative as possible to create an experience that goes with either craft beer or bourbon. Some guys have used fire cured tobacco from Virginia and Kentucky, some have been aging cigars in barrels that were used for bourbon and beer, and some have merely been using the oak barrels for aging their own tobacco in the blends. There are even some cases where individuals are using a combination of the three, and while the trend has become popular and very visible, it is not new. Individuals have been using oak barrels and fire cured tobacco for years now; it has just not been as popular or publicized. Camacho has decided that they will get themselves into the game and have announced/released the Camacho American Barrel-Aged. It is a very new cigar for the company, they are definitely leaving their comfort zone, and today we look at this newest release revolving around American tobacco and bourbon barrels.


The latest release in this trend of cigars revolving around bourbon, oak, and American tobacco- the Camacho American Barreled-Aged is a line that is completely new for Camacho. (Before I go any further though, I will be referring to the cigar as Camacho ABA. American Barrel-Aged is fairly long to write out continuously.) To begin with, the cigar is not made in Honduras but is made in the Dominican Republic at Occidental Cigars. The cigar is blended by Davidoff's Elado Diaz, and he is the man who oversees the factories Occidental, O.K. Cigars, and Cigars Davidoff. He is responsible for many blends, but the biggest one is the Oro Blanco by Davidoff. Along with the cigar being made in the Dominican Republic and not Honduras, it's tobacco breakdown is another game changer for the company.

The cigar begins with an American Broadleaf wrapper and is followed by  a binder leaf that is also American Broadleaf. The filler is composed of Pennsylvania Maduro, American Broadleaf, and of course Honduran Corojo tobacco. The Original Corojo tobacco being used is six years old and is aged for five month in Bourbon Oak barrels. The line comes in three vitolas, but for this review I went with the Toro that measures 6" with a 50 ring gauge. The Camacho ABA has a beautiful wrapper that has a rustic and old appearance to it, and it has a nice Colorado Maduro coloring. There are a few veins throughout, but the veins present are definitely more medium to larger in size. There is a lot of tooth present on the wrapper, and the texture is that of a semi-fine grit paper with some oils present. The foot is showing a lovely aroma that has rich earth, bourbon, oak, sweet spice, and tobacco notes, and the wrapper is producing notes of tobacco and oak. 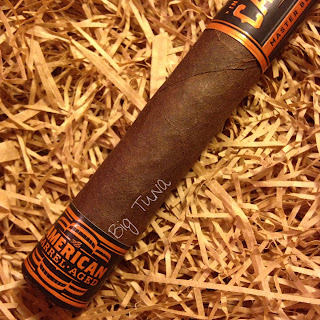 The first third opens up by showing an abundance of flavors and it is taking me in three directions. On one hand you are getting that American tobacco flavor and it is rich and earthy. There is a sweetness present and it is nice and heavy. With that you have those Honduran Corojo flavors and it is showing some heavy spice, leather, and tobacco notes. To top it all off, you are getting this genuine bourbon flavor and it makes for a complex cigar. I would say that the flavors are dead on full, but it is so balanced that it comes off as being more medium. The strength and body are medium to medium-full on top of that, and it makes for an enjoyable smoking experience. The construction thus far has been terrific and it is showing an even burn line with a solid charcoal ash on the end. The draw is cool, producing a great bit of smoke, and this is a complex blend that has a long finish. 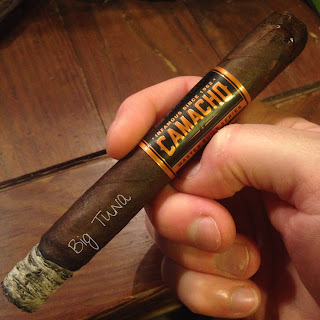 I am in the second third of the cigar now and it continues to show a complex flavor profile that really hits every aspect of the palate. The spice, leather, and strong tobacco note from the Corojo are present, and it is pairing perfectly with those bourbon flavors being produced. It is accompanied by that earthy gritty sweetness as well, and like before there is a lot going on. You can definitely get that bourbon quality, but it is not overpowering and instead complex and satisfying. It is a full flavored cigar in this third, you can definitely get that aspect, and it is full in strength and body as well. Truly a unique and enjoyable Camacho. The construction continues to be top notch in this third and it is showing that even burn line with solid charcoal ash on the end. The ash is holding on firmly and I am getting a smooth draw with a nice amount of smoke. 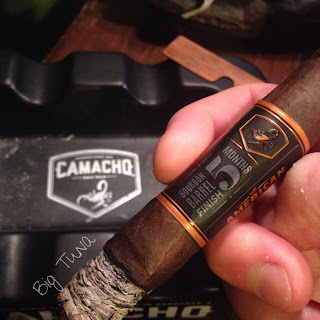 The final third continues to show the growth of the cigar, and as it has progressed it has become fuller in flavors, body, and strength. The body and strength are at an easy full level in this third  and you can taste the strength of all the tobacco in the blend from the Corojo to the American Broadleaf. With that growth, the flavors have intensified as well. I am picking up some strong earth notes which are gritty and filling, and there is a nice bit of pepper and spice present with that. The Corojo tobacco notes are strong as well and so are the oak notes on top of that. The bourbon flavors are present on the finish, and it is in your face. In terms of construction, the cigar continues to smoke wonderfully and it is showing an even burn line with that solid charcoal ash on the end. The draw is cool to the end, and it is giving off a nice bit of smoke to the end. 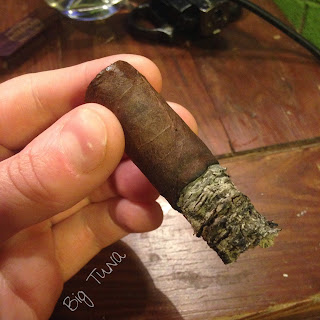 The Camacho ABA is something very different for Camacho, but in some ways it still speaks to the Camacho audience and comes off as a Camacho. Looking at the tobacco breakdown and where the cigar is made you will say that it is lacking in that Honduran aspect, but once you smoke the cigar you see that it is still producing a cigar that Camacho is known for and you can taste that Original Corojo flavor. From beginning to end this is a full flavored cigar that is continuously growing and showing transitioning throughout. It has complexity and depth, and that is what a great cigar needs. Along with that, the strength and body increased throughout as well and that resulted in very full finish. What is great about the Camacho ABA is that the American tobacco used in the blend was air cured like most tobacco for cigars and not fire cured like some other tobacco that is being used in other blends. This results in a more balanced and natural flavor profile, one that is very approachable. It is the Honduran tobacco that undergoes this bourbon barrel aging, and this provides a balance to what Original Corojo tobacco is typically like when smoking. Overall, the Toro gets a 91 rating and I really like what is offered. I think you will see ratings all over the place for a cigar like this, people's opinions are going to be everywhere, but I love what this cigar is and what it did for me. 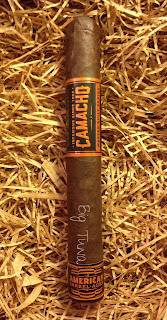 * Cigars for this assessment were provided to Seth's Humidor by Camacho Cigars.