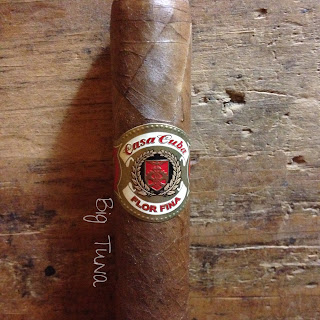 In late 2019, Arturo Fuente launched their delayed Casa Cuba. The line was a blend by Carlos Fuente Sr, and it was a cigar that paid tribute to the company's past and the cigars they made back in the early part of the 20th Century. It is a blend that is not in line with their current production or newer releases, but a blend that has an old school vibe. As the company has said, it is a blend that is reminiscent of some of their cigars that were blended with Cuban tobacco. The cigar was intended to be released for the company's 100th Anniversary in 2018, but due to several reasons within the company, including the fires in two of their warehouses, the cigars were delayed. Since the cigar hit the market, it has had mixed results and has really shown the difference between modern smokers palate and the younger generation, and today I take a look at the line and see where I fall in terms of enjoyment. With four offerings to select, I went with a classic robusto and went with the Casa Cuba Doble Cinco.


The Doble Cinco is one of the four vitolas on the market, and it is a robusto that measures 5" with a 50 ring gauge. The cigar features an Ecuadorian Havana wrapper and has a blend of Dominican binders and fillers. The cigars are made in the Dominican Republic, and are made at Tabacalera A. Fuente y Cia. Casa Cuba comes semi-pressed, and it has a slightly fattened head to the cigar. In a lot of ways, this captures the presentation of a Habanos. There is a lovely triple cap placed on the cigar, and the cigar has a wrapper that is Colorado in coloring. It has a slightly oily texture and is smooth throughout. There are minimal veins present overall, and the wrapper is giving off a light aroma of earth and tobacco. The foot has a nice sweetness and creaminess present, and it is giving off this marshmallow with earth, cocoa, and tobacco aroma. 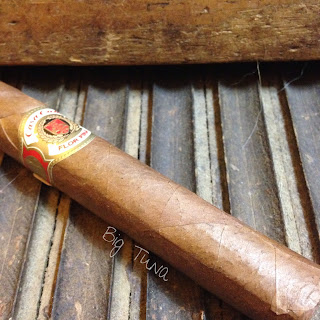 The first third opens up by showing some nice earth and leather flavors, and it has some old barnyard qualities with that. I am getting some pepper notes here and there as well, and it has this lemon vibe on the finish which is very enjoyable. It has a very old-school vibe to it, and you can see the direction the flavors are going in capturing that old Cuban flavor profile. The finish is long and heavy, and I would classify the cigar as being medium-full in flavors. The body and strength are at the same level which is resulting in a balanced and enjoyable cigar. The construction thus far has been nothing but spectacular and it is showing an even burn line with a firm charcoal ash on the end. The draw is cool and smooth, and it is what I expect with a cigar coming from the Fuente factory. I look forward to the second third and the transitioning and growth that can be in store. 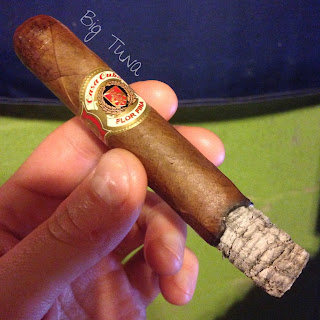 When I get into the second third of the cigar I find that the spice, leather, and earth notes become a little more prominent. I am picking up some tobacco qualities as well, and it has a that barnyard and wood finish. There are touches of lemon and coffee as well, and it is a very enjoyable flavor profile. It is very different than anything they have done, and it is definitely showing a stronger old school vibe.The body and strength are smoking at a medium full in this third, similar to that of the first third, and it has that medium full flavor profile present as well. I really like what the cigar delivers, and it is a cigar I could turn to in the morning, afternoon or evening. The construction continues to be top notch and it is showing that even burn line with the dark charcoal ash on the end. The draw is cool, producing a lot of smoke, and it has a long finish. 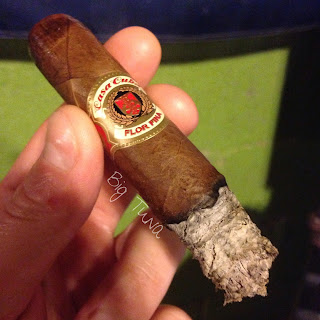 I am in the final third of the cigar now and finding that it is finishing wonderfully. It has a leather and tobacco flavor, and there are some lemon and coffee qualities present with that. There is a finish of barnyard and earth, and I am getting some spice and sweetness as well. It is a great finish and is showing some tremendous flavors. The complexity and balanced has been perfect throughout this third and entire cigar, and it has a lot of depth as well. In terms of body and strength, I would say that the cigar is smoking at a medium-full level and the same goes for the flavors. It has been consistent in that sense, and I am digging it on a personal level. The construction remains fantastic to the end and it is producing an even burn line with that lovely charcoal ash on the end. The ash is holding on firmly, and the draw is smooth and cool, producing a nice bit of smoke. 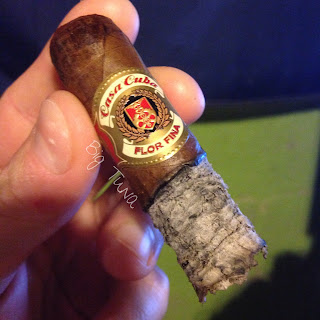 When I first smoked Casa Cuba, I was not huge on the line and did not give it much of a second chance. Well, after coming back to it and smoking it again and in different sizes I can tell you that I am hooked. I believe a part of the problem for some smokers is that they want to compare it to some of the limited and sought after Fuente releases, and that is not what this cigar is. The cigar delivers excellent flavors and they are flavors that you would not expect with Fuente. It has a very old-school vibe to the cigar and I am not trying to say it tastes like a Cuban, but it has some of those qualities which are to my liking. I think if you go for a flavor profile that is somewhat in line with some Cuban cigars you will enjoy it. At the same time you taste those quality Dominican tobacco flavors that are more traditional and not modern and powerful. The construction was terrific as well and it had a great body and strength level on top of that. I tend to look for cigars that are flavor focused while delivering a medium-full experience in body and strength and this cigar does just that. The Doble Cinco is a superb robusto and worthy of 91 points. 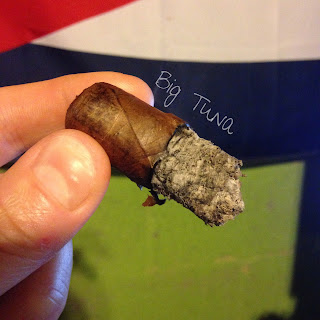 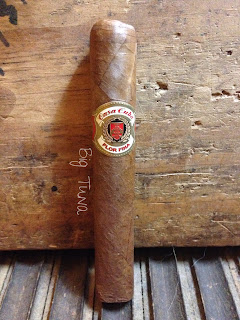