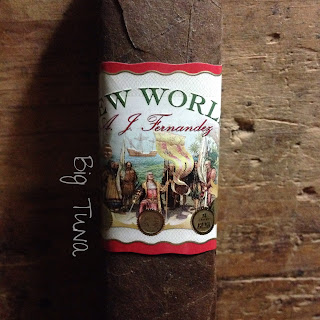 Last year, A.J. Fernandez announced and presented their newest line at the 2020 IPCPR Trade Show, the A.J. Fernandez New World, and within five month the cigar became the Cigar of the Year by Cigar Journal. The cigar has done very well for the company, and recently they announced the newest New World, the New World Connecticut. Back to the original New World, it is a line that has received a lot of mixed reviews from the online community. There have been some that have been very positive, and there have been some that have been against the line. The line itself is box pressed and comes in larger vitolas. It originally consisted of four vitolas, but in the Spring of this year, the company announced that there would be a fifth size coming to the market and it would be a 6" by 66 ring gauge cigar. The cigar is being called Brute, and is now available for retailers. Today I look at this massive new offering, the New World Brute.


Measuring 6" with a 66 ring gauge, the New World Brute is a massive cigar that exceeds the gordo title. Like the original vitolas released in the New World line, the cigar sports a Dark Nicaraguan wrapper that is undisclosed, a binder form Jalapa, and a filler blend of tobacco from Condega, Esteli, and Jalapa. The cigar is massive and has an industrial press to it. The cap is applied well and it sports a wrapper that shows practically no veins throughout. The wrapper is smooth in texture, and it has just the finest bit of grit present on the cigar. The coloring is that of a darker Natural and softer Maduro, and the aroma is that of manure and rich earth. The foot is showing some additional tobacco and sweet notes, and it continues with the manure and rich earth qualities. 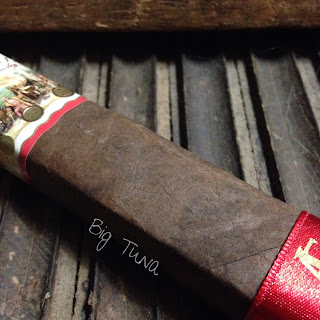 The first third opens up by showing sweet spice notes masked with rich and damp earth. There are some tobacco and white pepper qualities present as well, but overall it is showing this sweet spice and earthy flavor profile. It is not very complex, and is showing that New World flavor profile in a massive offering. The cigar is smoking at a medium-full level in terms of flavors being delivered, and the same goes for the body and strength. It is a balanced cigar, but it lacks complexity and a lot of qualities that can make a good cigar. The construction is solid thus far though and it is showing an even burn line with that charcoal ash on the end. The draw is cool, and with that is a nice bit of smoke being produced. So far, it is a cigar that is lacking a lot of complex flavors and is producing a core flavor profile in a big manner. 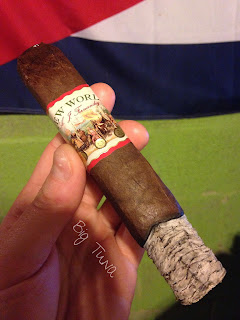 The second third shows some slight variation in the flavor profile and it has some transitional qualities. I am getting less sweetness and pepper in this third while it still delivers that rich earth and manure like traits. There are some spice qualities present and it has some woody notes present as well. While there is a core flavor profile, the cigar is lacking some overall complexity and depth, and I am looking for more in the overall blend. The body and strength continue to smoke at that medium full level and the same goes for the flavors. Overall, it is just not going the extra step to becoming a better blend. The construction remains solid though in this third and it is showing an even burn line with that firm charcoal ash on the end. The draw is cool, producing a lot of smoke on the palate, and it is a loose draw overall. 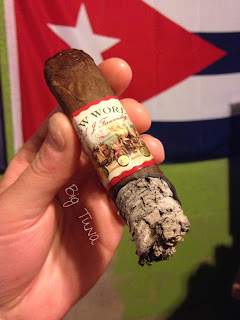 When I get into the final third of the cigar I find that there is a return of the pepper notes from the first third but the sweetness is completely gone. I am getting that rich earth flavor along with some woody notes, and it has a strong tobacco finish. The flavors showed some changes in this third, but overall the blend lacks complexity and depth which is very important. It has a full flavor, body, and strength profile in the final third, and it is a big finish for the cigar. I believe that if more flavors were present it would be better, but because of that it has lost a lot of solid qualities. The construction on the other hand is great, as it has been throughout, and it is showing an even burn line with that solid charcoal ash on the end. The draw has been cool thus far and it is producing a lot of smoke on the finish. I smoke the cigar down to the large pressed nub, and at the end the wrapper begins to unravel. 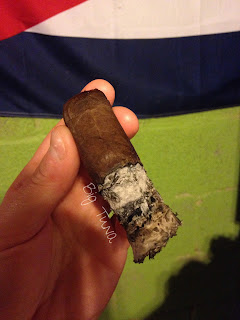 The New World Brute is a very large cigar, and it is a cigar that lacks a lot of complex flavors and depth. There is some transitioning throughout, but without a lot of flavors or complexity in each third it does not take off the way I would like. This is not due to the large ring gauge, in my opinion the blend never produced a lot of wowing factors, but the larger ring gauge definitely does not help. With that being said, if you are looking for a large cigar, and want something fairly consistent and easy, this is right up your alley. It has this nice sweet spice and pepper flavor present in the first third that is enjoyable, but on a personal level I just wanted more. In terms of construction however, the cigar delivered a beautiful burn line and solid charcoal ash on the end. It smoked perfectly throughout and in no ways failed in that sense. Overall, I would have to give the cigar an 84 rating. The line does better in the "smaller" sizes and you get a little more in terms of flavors. 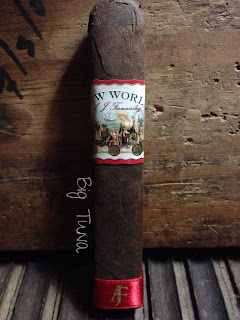 *cigars for this assessment were provided to Seth's Humidor by A.J. Fernandez.