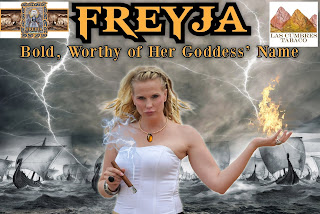 Las Cumbres Tabaco has recently announced their third and newest line, but it is not what you would think. The blend is not by Jose Blanco! In fact, Jose Blanco has nothing to do with this blend and the creation falls on the shoulders of his wife, Emma Viktorsson. This new release is called Freyja and the line pays tribute to the history of the Vikings who settled in the homeland of Emma, Sweden.


Feryja was the Viking Goddess of numerous things, two of them being beauty and fertility, but was also the chief of the Valkyrie. The goddess is very important to Emma, and she has informed me that She views Freyja as the bridge between her ancestry and the cigar countries. Freyja was created by Emma with the assistance of the production manager of Tabacalera Palma, Geraldito Perez, and only after she was fully satisfied with the blend did she give the cigar to Jose and Jochy Blanco to sample. (Jochy Blanco is Jose's cousin and owner of Tabacalera Palma.)

As of right now, four vitolas are being showcased at the 2021 IPCPR in New Orleans. Those four vitolas are- Sessrumnir Corona Larga (Corona Grande measuring 5 3/4 with a 42 ring gauge), Valhalla Robusto (Robusto measuring 5 1/2" with a 50), Thor's Toro (6" by 54 ring gauge Toro Grande), and Valkyrie Pyramid (Pyramid measuring 6 1/2" with a 52 ring gauge.) Pricing will range from $7.00 to $10.00 and will come in 21 count boxes. The boxes have not been finalized, but the bands have and are designed by Jana Jovanova who did the Senorial bands. (Sessrumnir was the Heavenely Hall of Freyja, and the location where she would carry the fallen Viking warriors.)

As for the actual blend, Emma used tobacco that is common in Tabacalera Palma, and it is a tri-country blend. All the Dominican tobacco is from Jochy's farms in La Canela, and the tobacco has been aging for for to five years. The wrapper is Dominican Criollo '98, binder Mexican San Andres, and the filler is a blend of Dominican Criollo '98, Dominican Piloto Cubano, and Criollo '98 from Esteli in Nicaragua. There are four leafs used in the blend, two of them are different priming Dominican Piloto Cubano. Emma classified the cigar as showing a nice bit of spice, fruit bread, and chocolate notes. It is a full body and full flavor cigar, but the strength is just south of full falling into the medium-full area. The cigar has a long finish, and the sweetness differs throughout the line.

For those unaware of Emma's past and history in the tobacco industry, she has been working in the industry for ten years, staring with Swedish Match in 2005. She began working in the Eastern European countries in marketing, moving to the Dominican Republic towards the end of her career to work in operations. In 2010 she left after starting her life with Jose Blanco, but she was very active though behind the scenes when Jose was with Joy de Nicaragua. She plays a crucial role with Las Cumbres Tabaco, and spends countless hours in the office and in the factory.