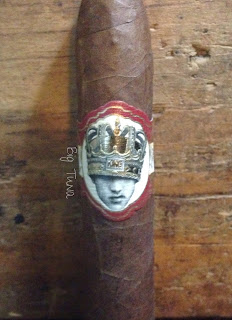 Last month, Caldwell Cigar Company announced that their three premium lines would be receiving vitola additions. The King Is Dead would be receiving a Lonsdale, Eastern Standard a Toro and Pyramid, and Long Live The King a Belicoso. The announcement was not a surprise in my opinion because I did not foresee the company announcing a new line. They had six lines released last year, having a huge and successful inaugural year, and the company's first limited edition line is being sent to retailers as we speak. The company has announced its presence as being young and something different, and it is a company that has been edgy and speaking to a large number of retailers. While the packaging and design may be more to the liking of the younger cigar smoking generation, it is when the seasoned and older smokes light up the cigar that they understand the appeal. The appeal is not merely because of the packaging, but because of the greatness in the cigars. Today I look at the latest addition to the Long Live The King line, and this is my favorite line from the company. As mentioned earlier, the addition is a belicoso, and it goes by the name Lock Stock.


The newest addition to the Long Live The King line, Lock Stock is a belicoso that measures 5" with a 52 ring gauge. The cigar features a Dominican Corojo wrapper and binder, and the initial batch of cigars sports leafs from 2008 and 2009 respectively. I imagine that they are onto different vintages, but who knows. The filler is a tri-country filler blend, and it features Dominican Corojo Ligero, Nicaraguan Habano Ligero, and Peruvian Pelo De Oro Viso. The percentages are 50%, 40%, and 10% respectively. The belicoso comes with a nice tapered finish, and overall it is a sharp finish. The cigar has a nice marbled brown coloring to it, and it is a lovely Colorado coloring. The texture is that of silk, and there are a couple veins here and there throughout. It is fairly firm throughout the cigar, and this is a well rolled cigar. There is a lovely aroma of barnyard, manure, and earth on the foot, and the wrapper is showing aromas of spices, tobacco, and damp wood. 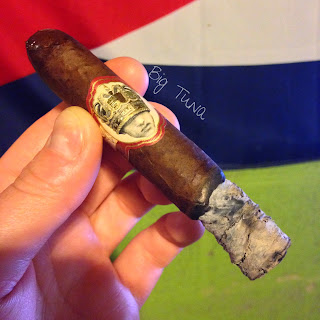 The first third opens up by showing some enjoyable spice notes, and I am picking up some soft black pepper qualities with touches of cinnamon as well. There is a rich earth quality present as well, and it has a nice sweetness that is showing some tobacco flavors. There is a touch of leather and wood present on the finish, but overall it has a nice spicy pepper flavor. I would classify the flavors as being full overall, and the body is right there as well. The strength is closer to medium-full in my opinion, and this is a nice offering. The construction is okay so far, and while the burn line has not not been even at times, it corrects itself more often than not. There is a nice solid charcoal ash present on the finish, and the ash is holding on well. The draw is cool on the tapered head and I am getting a concentrated amount of smoke. 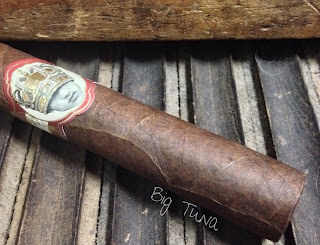 When I get into the second third I find that there are some additional flavors added to the mix, and I am picking up some new herbal notes with creamy qualities. For a period of time, there is this cream soda flavors, and it has a nice sweetness, but it slowly makes a return to the spiciness from before and I am picking up some pepper flavors on top of that. There is a nice cinnamon, leather, tobacco, and wood finish on top of that, and it is an enjoyable second third. The construction remains fairly similar to that of the first third as well, and it is showing a slightly off burn line with a charcoal ash on the end. The ash is holding on firmly, and I am getting a nice bit of smoke with each cool and concentrated draw. I would say that the cigar is smoking at a medium to medium-full level in terms of flavors, and the strength and body are there as well. So far, a balanced cigar and one that has the qualities working together. 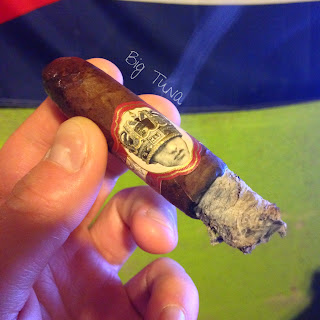 As I enter the final third of the cigar I find that the flavors show a mingling of the first and second third and I am picking up some nice combinations of spiciness and creamy sweetness. I am picking up predominant pepper, leather, and herbal flavors on the forefront, and on the finish is a nice woody, creamy, and sweet tobacco flavor. There is a faint amount of that cream soda flavor present as well, and it is a great finale. The construction improves greatly in this third and it is showing an even burn line with that solid charcoal ash on the end. The draw is cool, producing a solid amount of smoke, and it smokes cool and flavorful through the tapered end. I would classify the final third as being medium-full in flavors, body, and strength, and it is a nice finish that is showing a nice bit of balance and complexity. 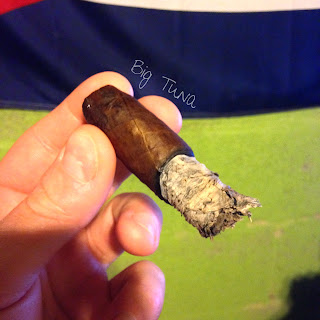 Long Live The King is my favorite line from Caldwell, and it is a line that is filled with some solid releases and some great releases. I believe the Petit Double Wide Short Churchill to be the best of the vitolas offered, and I would classify The Heater as second best, followed by Lock Stock. Lock Stock is definitely a little bit different than those two releases, and I found that it was slightly softer and creamier, delivering a nice variation of the flavor profile present with the line at it's release. The line itself ages well, and I believe that will be the case for Lock Stock, showing improvement in months and even years. I do believe this vitola is more approachable and softer than other releases, so if you thought past releases were too strong, try this one out. Overall, the cigar is a solid release and I give the cigar an 89 rating. I am a little surprised that a belicoso was added, the reason being that I don't see it being a popular size in the States right now. With that being said, he know has a figurado in all three lines, and that is important for traditional line offering aspects.