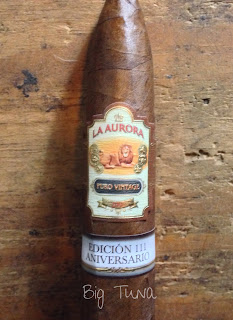 
The Puro Vintage 2006 is a beautiful salomon and it measures 6 1/2" with a 60 ring gauge. A total of 1,500 boxes are being released, and the cigars come in 18 count boxes. The packaging will pay tribute to original packing of La Aurora in 1903, and it will be stand up box. The cigar is intended to celebrate the company's 111th year in business, but what is odd is that the 111th, year would have been 2020. It is not your traditional salomon, as it is a little bit shorter and fatter, but it has the same figures and is wonderful to the eyes overall. The belled foot is great and the tapered head is finished perfectly. The cigar features an Ecuadorian Habano wrapper, a Brazilian binder, and a filler blend of Brazilian, Nicaraguan and Dominican tobacco. The cigar has a lovely wrapper that is oily overall and shows some tooth throughout. The veins are minimal, and the coloring is that of a nice Colorado. The salomon is firm throughout, and it is showing an aroma of toast, leather, spices, and tobacco on the wrapper, with an aroma of rich earth, chocolate, and spices on the foot. 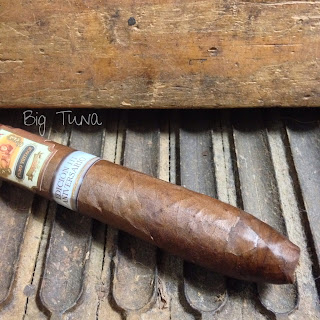 The first third begins by showing some noticeable spice and earthy notes. There is a nice damp and rich earth quality to the cigar, and it is paired with a dark Asian spice profile that has some pepper notes with that. I am getting some fruit bread qualities on top of that, and there is a richness that is also showing some oak notes on top of that. It is a very filling flavor profile and it has a long finish. I would classify the body and strength as being around medium-full, and it is a nice follow up to the full flavored cigar. The construction is okay thus far, and you can tell that thick and oily wrapper are playing a factor on the burn line of the cigar. It is burning a little off and has a thick burn line. The ash is solid on the end though and it has a nice dark charcoal color. The draw is cool however and producing a nice bit of concentrated smoke on the palate. 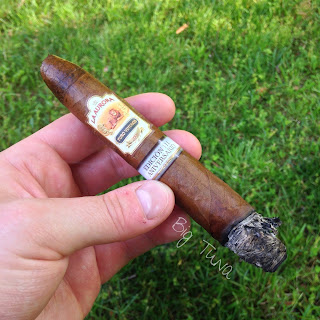 I am in the second third of the cigar now and the spice is dying down some and it is showing those rich earth and damp wood notes. There are some subtle hints of spices but it is more cinnamon like with strong coffee flavors. I am getting some of those fruit bread flavors as well and it has a nice rich and full flavor profile. I would classify the cigar as being medium-full still in strength and body, and everything is working well with one another. It is a very filling cigar and it has a nice long finish that lingers on the palate. The construction on the cigar is still somewhat off and I have had to touch up a few times. Salomones don't always smoke that great for me and that really comes with the size, difficulty in rolling, and tobacco being used. The wrapper is thick and oily so while that is visually appealing, it needs to be dry-boxed some before smoking. 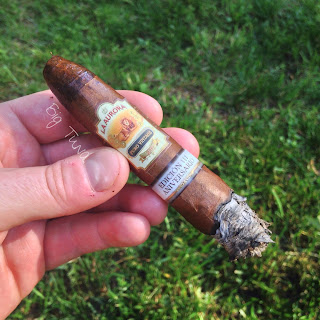 When I get into the final third I find that there is an increase in the spice flavors and it is showing a nice black pepper flavor profile. I am getting some cocoa and rich earth flavors with that, and it has a nice damp wood and fruit bread flavor on the end. It is a very flavorful cigar, one that will age well in my opinion, and I love the long finish that comes with the cigar. The body and strength continue to smoke at that medium-full level and it is working well with the flavors being offered. What I love about the cigar is the finish that comes with the cigar and the greatness of the tobacco being used in the blend. The construction improves slightly in the final third and while I have had to touch up the cigar a little, it is not to the degree that I did in the second third. I smoke the cigar down to the tapered finish, and it is cool and long finish. 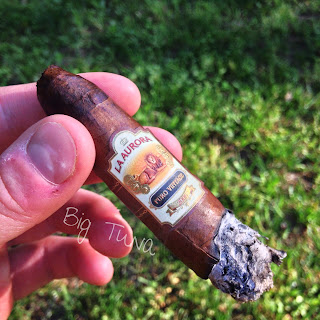 The Puro Vintage 2006 is a solid release and the most successful release since the original Puro Vintage. It is not to the degree that the original Puro Vintage was, but it is much better than the follow up releases for the series. The construction was fairly solid throughout the entire salomon and it produced a great amount of smoke. The body and strength were to my liking and that medium-full level was perfect with the flavors being delivered. It is a complex cigar that has a lot going on, and you can tell that each tobacco leaf used in the blend served a purpose. You can pick up the Brazilian and Ecuadorian qualities throughout, and the Dominican and Nicaraguan tobacco in the blend were distinct as well. I would definitely smoke more of these down the road, and I would love to see what age does to these. I think in a couple years they will be phenomenal. I am giving the cigar a 91 rating and I want to see more releases like this from La Aurora.