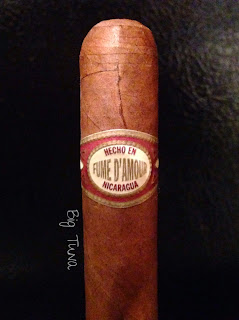 If you pay attention to my site and what I review and smoke, you will notice that I am huge supporter of Illusione. It is a brand I can truly get behind, and it is a brand that has never disappointed me as a consumer. Probably my least favorite offerings from the company are the Candela and Maduro, and I think those are fantastic as well, especially in the ~888~ offering. Illusione has a cigar for all occasions in my opinion, and no matter the strength and body of a particular cigar, they are always flavorful. Last year he released a new line, Fume D'Amour, and it was a line that really spoke to me and grabbed my attention. I felt that it delivered some of those lighter and complex flavors present in the Epernay line, but at the same time was slightly fuller in terms of body and strength. I reviewed the Clementes back in September of last year, loving it,, and today I look at the Lagunas.


Fume D'Amour comes in four vitola offerings and for this review I went with the smallest offering, Lagunas. The petit corona measures 4 1/4" with a 42 ring gauge and is made in Nicaragua at TABAS. THe blend revolves around the region of Jalapa, and is composed with no ligero tobacco. It is primarily Corojo tobacco, and it is lower priming leaves. This is not the first time he has done this, he did it with the Epernay, and he has done a terrific job with these blends.The Lagunas is rolled perfectly and has a spectacular triple cap placed at the head. The wrapper is applied well and the seems are practically invisible. It is smooth and silky in texture, and sports only a few veins here and there. It has a nice weather Colorado coloring to the wrapper, and it has a nice dry red clay coloring. The wrapper gives off an aroma of rich earth, sweet spices, tobacco, and barnyard, and the foot is showing aromas of sweet spices, chocolate, coffee beans, and tobacco. 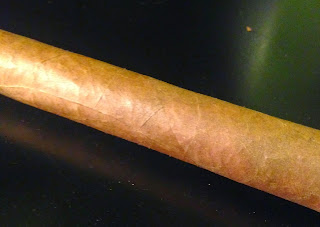 The first third opens up by showing some awesome cinnamon notes. There are some sweet spice qualities with that, and I am picking up some creamy, honey, and coffee qualities on top of that. It is very filling and at the same time balanced. There is a nice richness and sweetness overall, but it has a peppery spice on the finish which takes it to a whole new level. It truly is a flavor bomb, and this is what makes a great cigar. In terms of body and strength, I would classify the cigars as being medium-full in both areas, and it is working with the flavors being delivered. The construction is dead on thus far and it is showing an even burn line with a nice light charcoal colored ash on the end. The ash is holding on firmly, and I am getting a cool draw with a nice bit of smoke produced. The draw is perfect and this is what separates good cigars from great cigars. 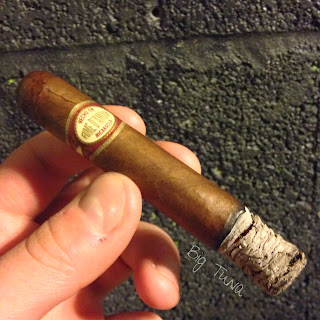 I am in the second third of the cigar now and it is showing some nice transitioning in flavors. I am picking up some subtle licorice flavors and for a while some fresh tropical fruit qualities. It still has that creaminess and sweet spice present as well, and it has a nice honey and coffee like finish. The body and strength have come down in this third, and I would classify the cigar as being between medium and medium-full in that sense. The strength and body are pairing with the flavors, which are less full in this third as well, and it is a balanced and complex smoke. The construction continues to be phenomenal, and it is showing an even burn line with that light gray ash on the end. The draw is cool and smooth, and I am getting a nice bit of concentrated smoke on the palate. So far, this cigar is nothing but great. 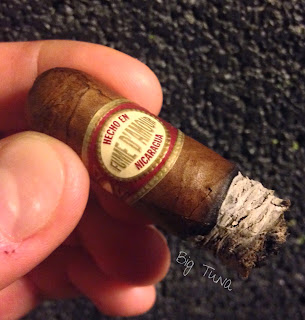 When I get into the final third of the cigar it begins to show some additional transitional qualities and it is showing more cream, tobacco, and sweet spice notes. There are some coffee and cinnamon qualities present as well, but it is really showing the sweetness from the tobacco; some spice as well. The flavors are smoking at that level between medium and medium-full, and the body and strength are on that same playing field. It is a very balanced cigar and it is a cigar that shows so much complexity overall. Everything compliments one another in this cigar, and at the end of the day that is what you want. The construction remains perfect in the final third and it is producing an even burn line with that light charcoal, near white ash on the end. The draw is cool and giving off a lot of smoke, and I smoke the cigar down to the nub. It is cool to the finish and very flavorful. 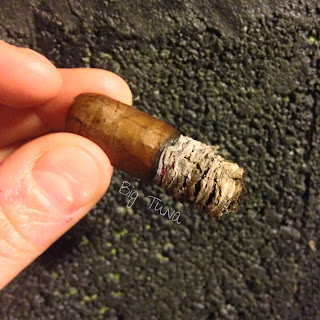 The Lagunas is a terrific offering in the line and probably my second favorite smoke after Clementes. The shorter smokes make it more approachable throughout the day, and with the shorter size you lose very little from the Clementes offering, and still have a cigar that is delivering an abundance of flavors and complexity. The flavors are matched with a terrific body and strength level as well, and this is a cigar I could smoke anytime of day. I always look for flavors, not strength or body, so a cigar like this fits into the selection because of everything it has. The construction is absolutely spectacular from smoke to smoke, and I have smoked probably a box of these without any problems. There is a reason this line received as much praise as it did at the end of last year, and that is because of everything offered. I give the Fume D'Amour Lagunas a 92 rating. If you have still not reached out for a Fume D'Amour, go get some. Dion and Illusione Cigars keep a very low profile, and that definitely impacts his social media presence with consumers, but he has amazing cigars that aficionados love. 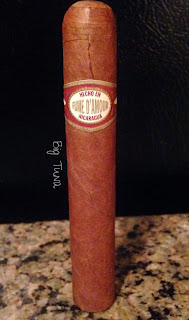