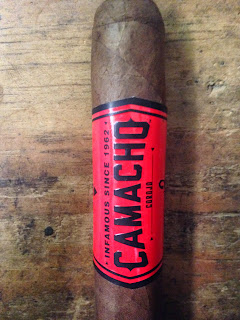 When I think of Camacho Corojo, I do not think of a refined cigar, but rather a rugged offering. It is not clean shaving and in a tailored suit from Savile Road, but rather sporting a beard and that blue jeans and white shirt look. There is something about Camacho that gives off this "man's man" or "cigar of the people" vibe that simply makes it awesome. The Corojo line has been on the market for a long long time, and it is a line that I was first introduced to in 2006. At the time I was not smoking Honduran puros, Nicaragua was not even close to what it is today, but when looking for something with a little more body and strength while keep flavors, I was directed to Camacho Corojo. Since then, the line was repackaged and given a slight blend change in 2019, but it is still Camacho Corojo, and that is why I am coming back to the line today.


The Camacho Corojo is composed of entirely 100% Corojo tobacco, and it is authentic Corojo tobacco that was "liberated" from Cuba. (Cuba was no longer using the seed as they could not control blue mold and black shank.) The tobacco is grown in the Jamastran Valley of Honduras, and it has been grow here successfully since the 1960's. For this review I went with the classic vitola, the Robusto, and it measures 5" with a 50 ring gauge. The cigar features a 5th priming Corojo leaf as the wrapper, and underneath that is Corojo tobacco in the filler and binder. The cigar sports a rustic colored wrapper, and it has touches of dark Natural and Colorado. It is very smooth in texture and it shows a soft silky and gritty quality. The foot has an aroma of leather, tobacco, wood, white pepper, and floral qualities, and the wrapper is giving off a nice tobacco, wood, and earthy character. 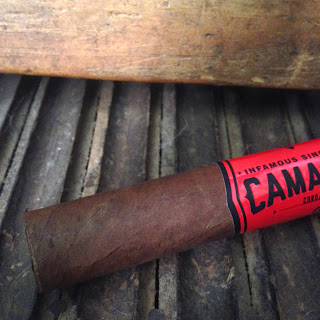 The first third opens up by showing that great authentic Corojo flavor from Honduras. There is a lovely floral aroma and flavor with the cigar, and it has a nice sweetness as well. I am picking up some nice tobacco notes on top of that, and it has a finish that is showing some spice and pepper notes with some touches of nuts and toast. I would classify the flavors as being medium-full, and the body and strength are there as well. There are times when you get a full body and full strength Camacho Corojo, but I find more often than not that they smoke at a medium-full level. The construction is terrific thus far and it is showing an even burn line with that charcoal ash on the end. The ash is holding on firmly, and there is a nice bit of smoke being produced on the easy and cool draw. 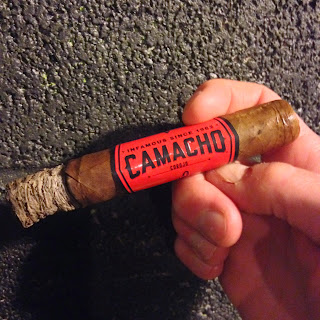 When I get into the second third of the cigar I find that the sweetness and floral qualities are still present, but the spices notes are stronger than they were in the first third. It has a nice balance between sweet and spicy, and I am picking up this nice sugarcane with white pepper flavor profile. There are some woody notes present as well, and this is a solid cigar that shows how great Honduran Corojo truly is. The flavors are smoking at that medium-full level and the body and strength are right there as well. The cigar is balanced and has a nice complexity, and it is nice to smoke a cigar that has been on the market for a while and is still flavorful. Yes, the re-blended the cigar, but they did it so that it would show some of those qualities that the line had when it was first releases. The construction is simply terrific in the second third of the cigar and it has an even burn line with that nice charcoal ash on the end. The draw is still easy and cool, and there is a nice amount of smoke being produced with each draw.

I am in the final third of the cigar now and it is showing a little bit more transitioning in this third. I am finding that it is not as sweet as it was in the first and second third, but it is showing some nice tobacco, wood, and spice notes. There are touches of white pepper here and there, but I am also getting some cinnamon notes. There are hints of floral sweetness on the finish, and it is a nice finish that is stronger than it has been thus far. The construction remains absolutely perfect with the cigar and it is delivering a razor sharp burn line with a charcoal ash on the end that is holding on firmly. The draw is smooth, producing a terrific amount of smoke, and it is a cool draw. I would classify the cigar as finishing just south of full in terms of body and strength, but it is definitely above medium-full. 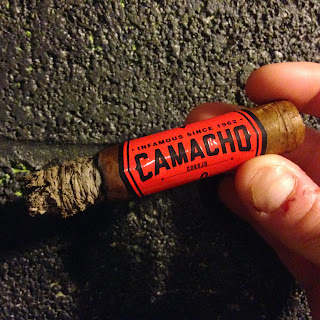 In the past week or so, I have smoked a whole box of these and they are a cigar that when I smoke one, I smoke two more afterwards. It has been consistent from cigar to cigar, and always enjoyable. While the packaging has been updated and the blend has been tweaked, it is a classic blend and one that really shows the wonderful qualities of Authentic Corojo that is grown in Honduras. The tobacco is so aromatic, showing a nice combination of sweet and spicy flavors, and the result is a balanced cigar that has a lot going on. To me this is not a cigar that is wowing or mind blowing, but in no way is it a disappointment. If you are looking for a solid cigar that is consistent and simply good, this is a terrific option. Camacho has done a good job of bringing attention back to the brand, and I am glad that I picked these up and smoked them because it has been years since I smoked a Camacho Corojo. I am giving the cigar a solid 88 rating. 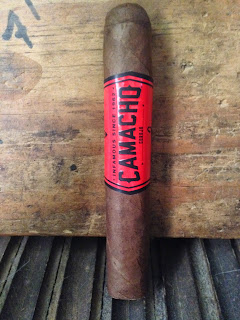