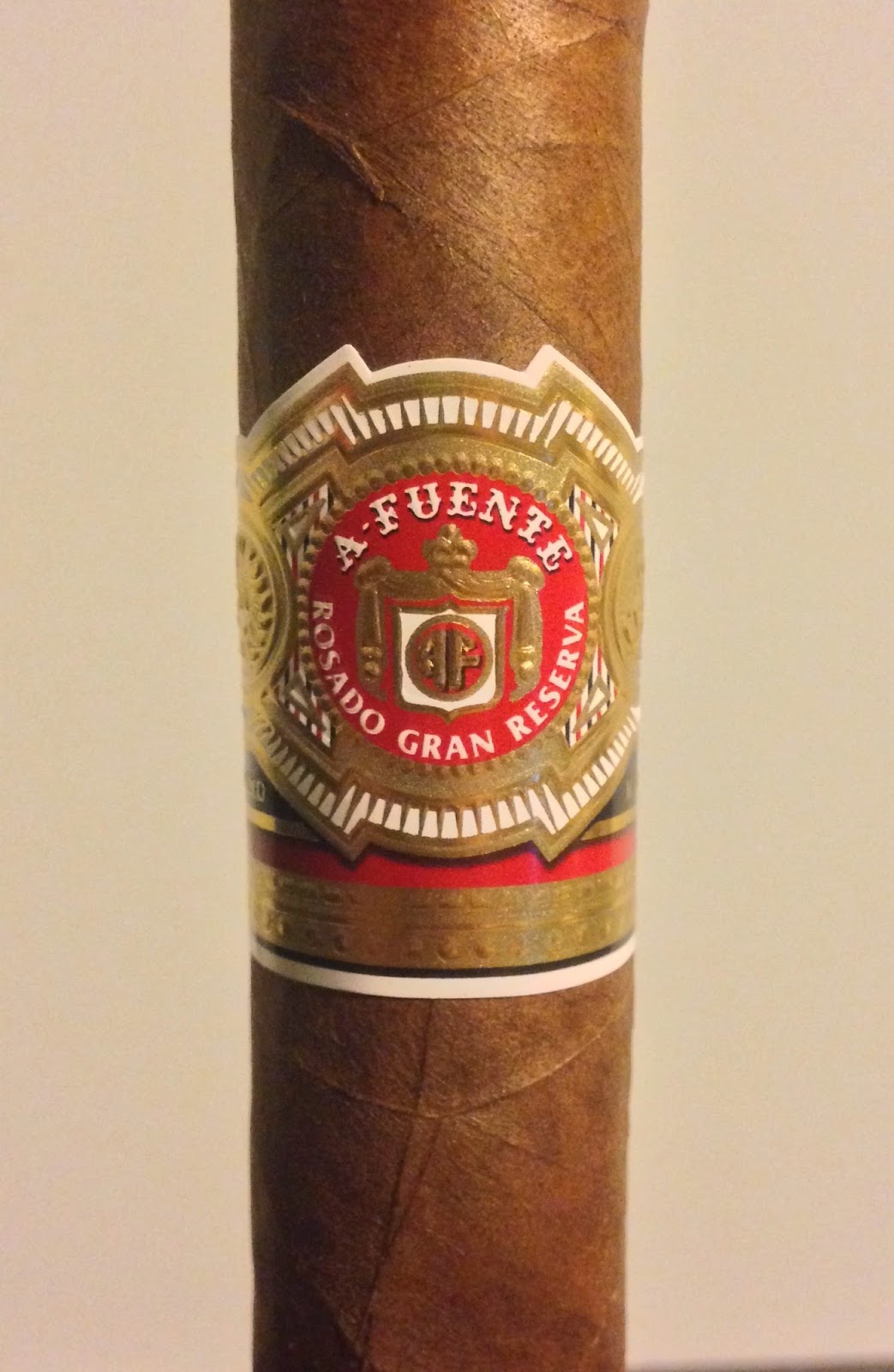 
Originally released in 2009, the Arturo Fuente Rosado Sungrown was a line that revolved around a ten year old wrapper from Ecuador that was harvested from the lower primings. Underneath that was a Dominican binder and filler blend, and the cigar was aimed at being on the milder side of the spectrum while showing a lot of flavors. The line consisted of four cigars, and their ring gauges were in the 50 ring gauge area. Eventually they added the R44 for the smaller ring gauge fans, and this year we saw the addition of the Super Sixty. The cigar is a 6" by 60 ring gauge cigar, and is the sixth vitola for the line. The cigar features a wrapper that is silky and oily in texture, and it has a beautiful color that is a lovely light Colorado. It has a really redwood coloring, and it is beautiful in terms of appearance. There are few veins present overall, and the veins present are minimal to the eye. The cigar features the classic Rosado Gran Reserva band, and it has a nice triple cap on the finish. The Super Sixty is firm overall, and the foot is giving off an aroma of light hay, cedar, and barnyard, with some touches of spices here and there. The wrapper is giving off a nice woody aroma, and there are some tobacco notes present there as well. 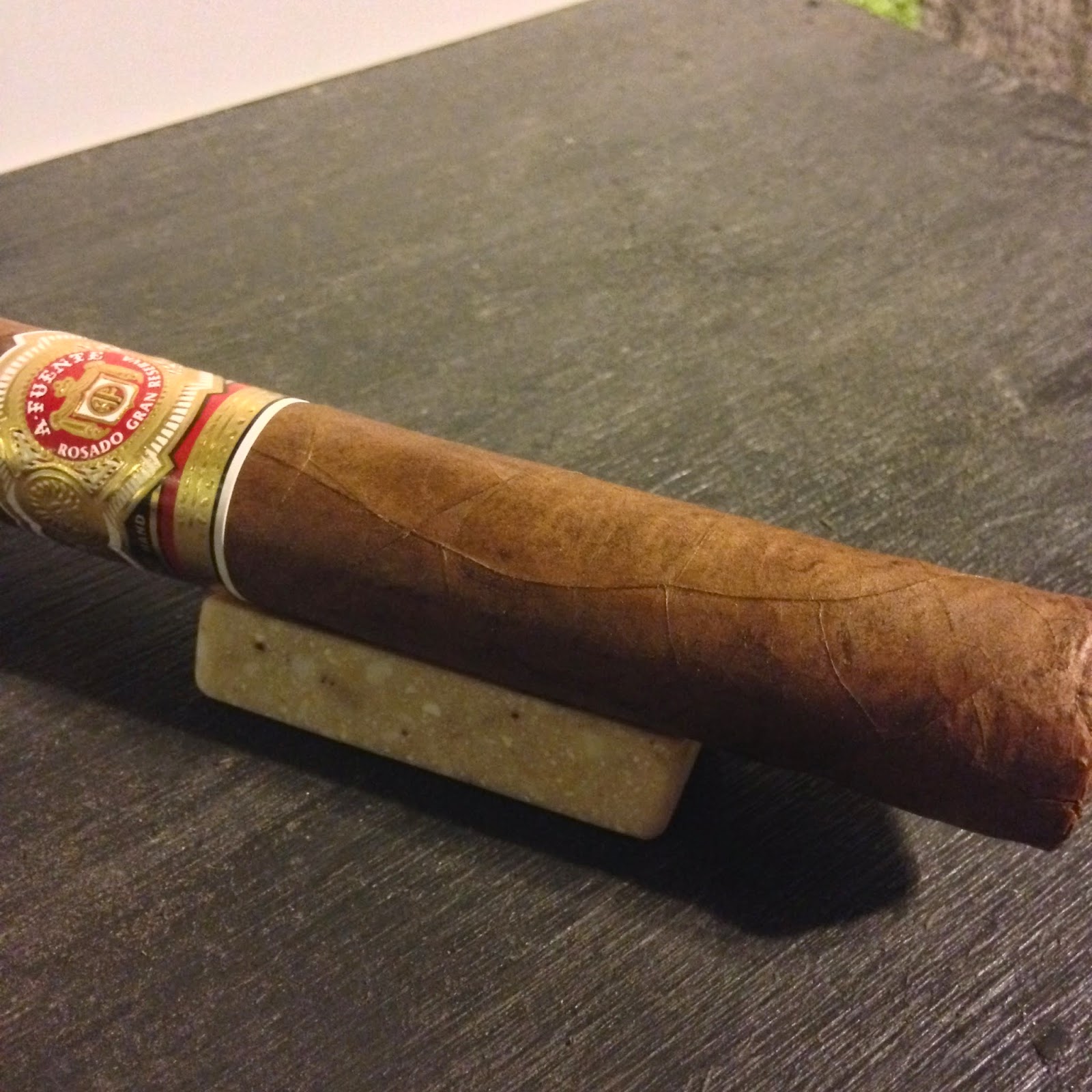 The cigar begins by showing some terrific flavors, and it begins by showing a nice honey and musty wood flavor profile. Eventually some cream notes begin to add to the portfolio and with are some tobacco and light spice notes. There is a nice cedar and leather flavor on the finish, but at all times there is this sweet cream and honey quality. I would classify the flavors as being medium overall, and the same goes for the body and strength. It is really a solid medium cigar, and it is a cigar that could be enjoyed by some in the morning while others more so in the afternoon and evening. I personally could smoke it any time of day, and that is what makes it great for me. The construction is solid in the first third and it is showing a fairly even burn line with a nice charcoal ash on the end. The draw is very cool and quite open, and there is a nice bit of smoke being produced with each draw. 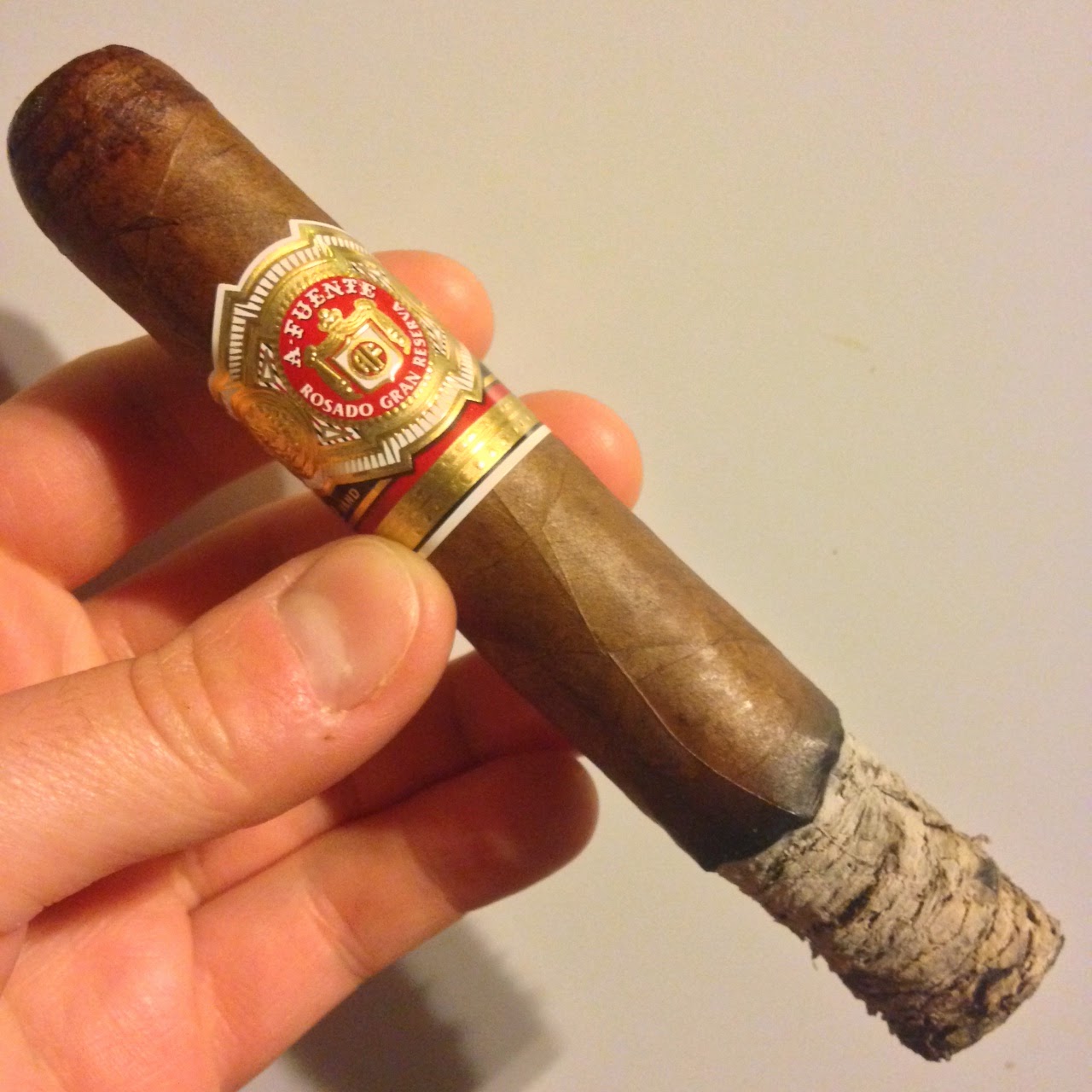 The second third shows some nice transitioning as a cigar and it is delivering noticeable nice cedar notes with a sweet spice kick. There are some wood dust qualities present as well, and on the finish it is showing faint qualities of cream and honey with a very soft marshmallow flavor profile. The flavors seem softer overall, but I would still classify the flavors as being medium and very approachable. The strength and body continue to smoke at that medium level as well and it is a well rounded cigar that has everything moving in the direction at the right pace. The construction continues to be solid as well with the cigar and it is showing a fairly even burn line with that solid charcoal ash on the end of the cigar. The draw is cool and it is producing a nice bit of smoke with each open draw. 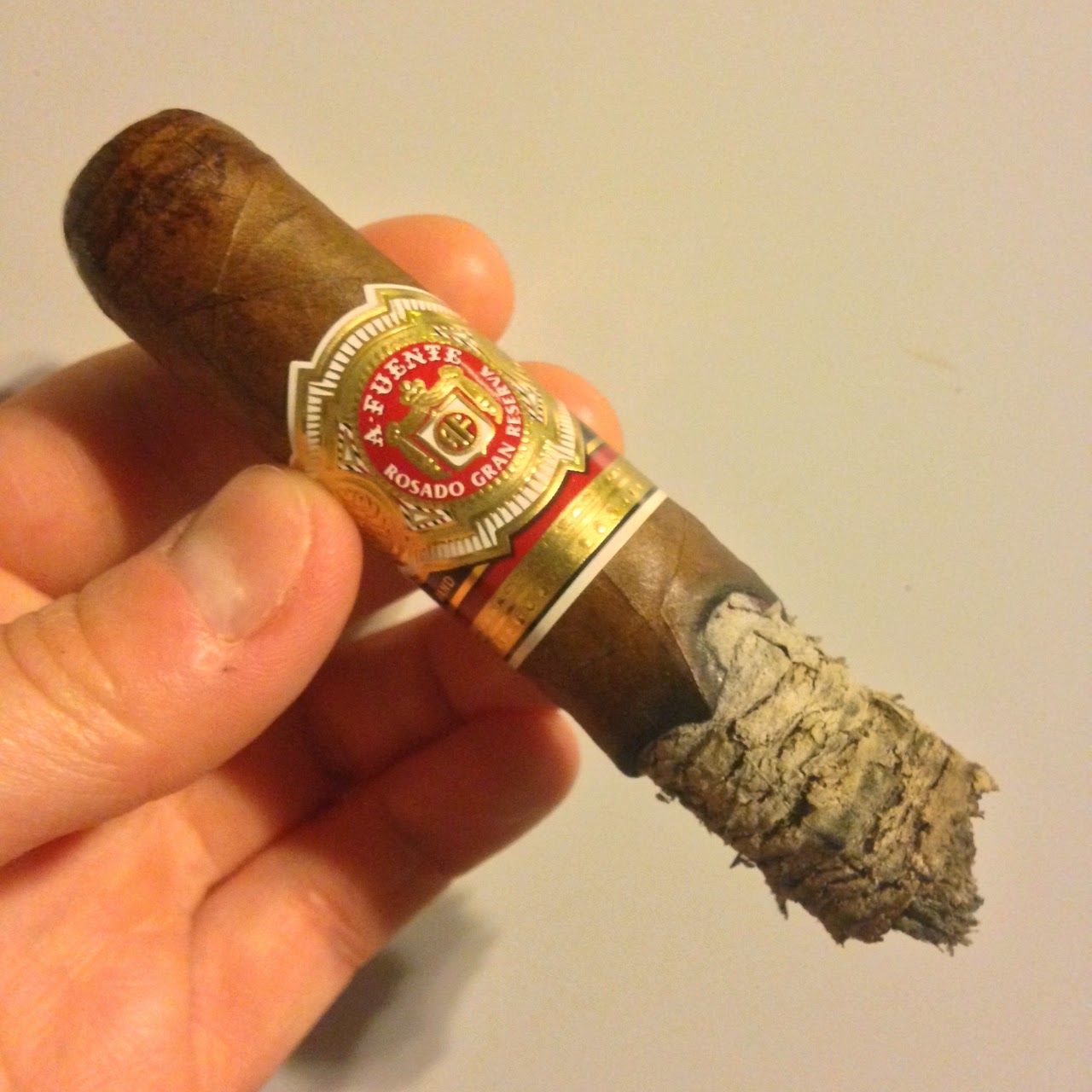 When I get into the final third, I find that it is delivering a lot of the flavors that are present in the second third, and it is showing those cedar, honey, and cream notes. There are touches of tobacco and leather present as well, and it has a sweet wood finish overall. There are some spice and pepper notes present as well, and it smoke well till about the last inch. I find that when it reaches that point that it goes downhill and that it gets warm and loses the enjoyable flavors. The body and strength finish at that medium level and it is matching the medium flavor profile. In terms of construction, the warmth at the end is a bit of downfall and there is a sharpness which is not to my liking. The draw is not as cool as I would like and it is disappointing. The burn line is still even though and and it is showing a charcoal ash on the end. It gives off a nice bit of smoke, and I put it down before getting to close to the end, letting it put itself out. 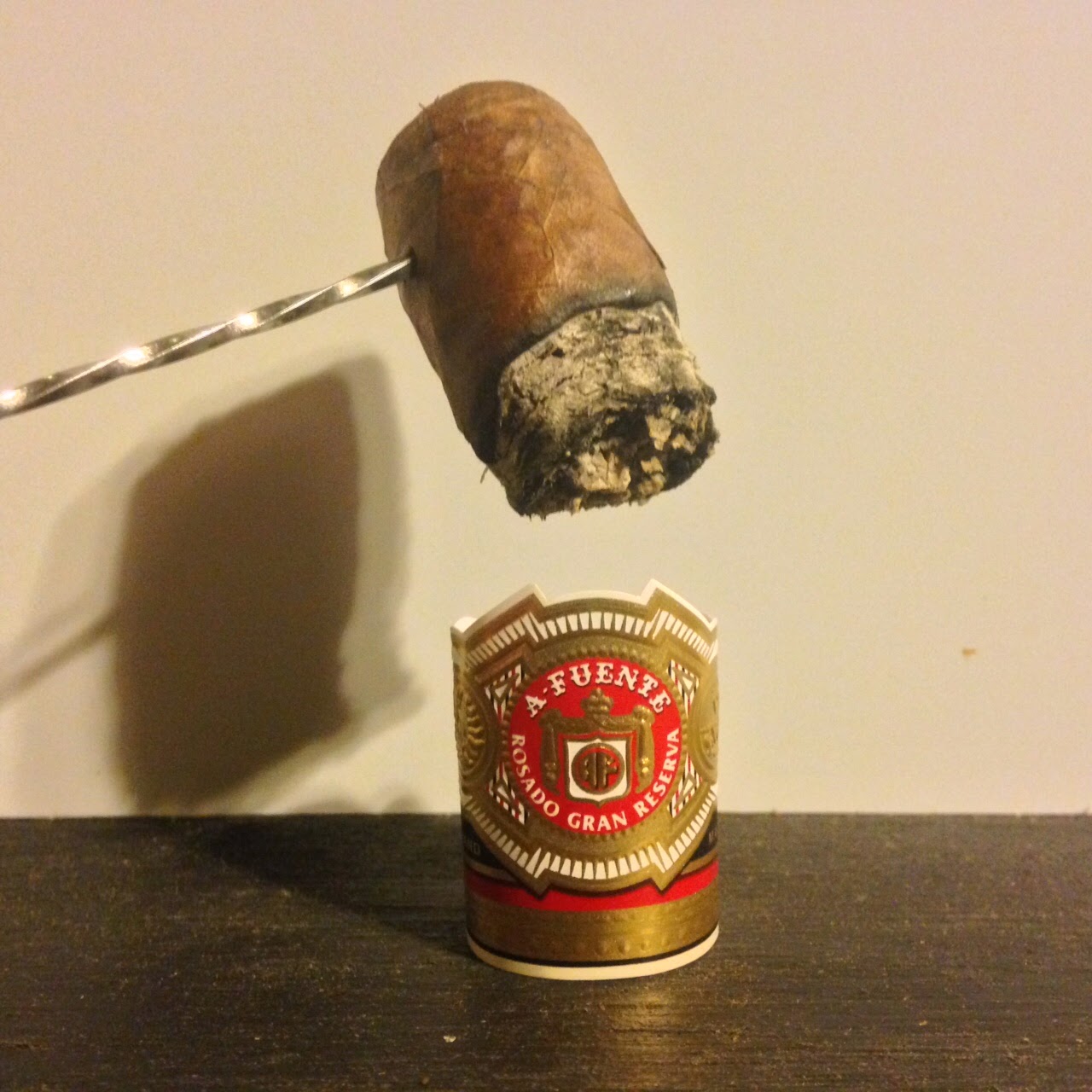 It is interesting to see how the Super Sixty smokes in comparison with the other five vitolas. As to be expected, with the smaller ring gauges you get more of the wrapper and a little bit more body and strength, but with the larger offering you are getting a stronger honey and creamy flavor profile. It is a milder version overall, and has some lighter flavors, but is still showing that flavor profile that was produced in the Rosado Sungrown line with a twist. I still prefer the R44 offering, that is just where I am as a cigar smoker, but after that I would go with this cigar. The creamy and honey aspects were really enjoyable, and this is a morning cigar for me. I had a problem with the last inch and a half, which was a big downfall, but the rest of the cigar was really entertaining. The construction remained solid throughout the entire cigar and it is a cigar that is perfect for when you have a long period of time for smoking. I am giving the cigar a solid 88 rating, and I would come back to it and recommend it to Arturo Fuente fans who also like larger ring gauge smokes.