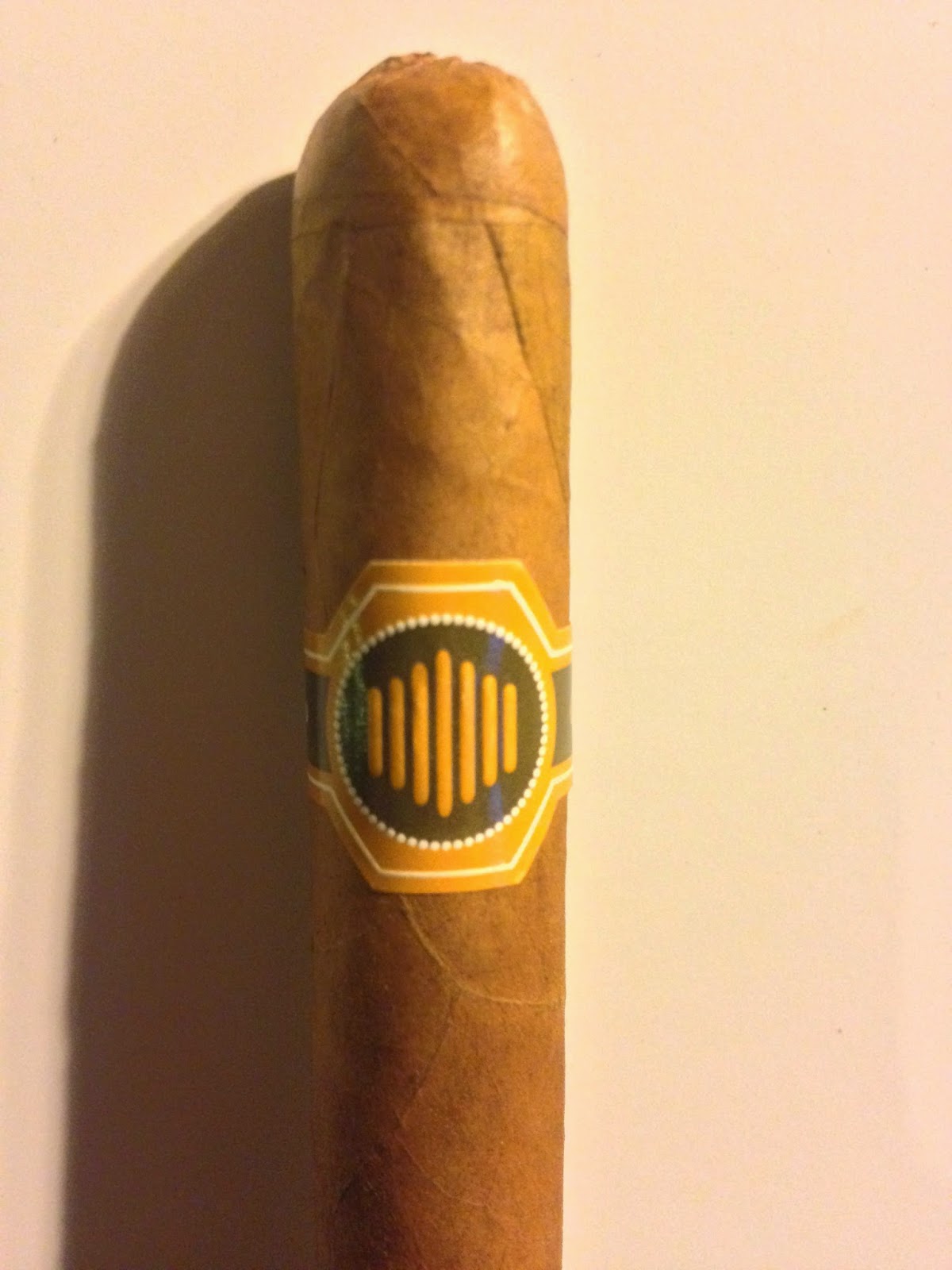 With a brand like Warped Cigars that has few releases overall, it is a brand that is important to cover, and see the differences throughout the entire brand. Some of these companies have so many lines and vitolas in lines that you can't provide coverage that you would like, so when the opportunity comes to see how a complete brand smokes and see the differences throughout the brand and vitolas in the line, it is important to seize that opportunity. Today I continue my work on the La Colmena line from Warped Cigars, and focus on the third of four vitolas. It is a line that is known for small ring gauges and a heavy focus on the wrapper flavors, so what better an opportunity then to see how that wrapper really tastes on the smallest vitola offering in the line. This is one of the two "regular" production vitolas, and despite it being the smallest offering, it was not the vitola I was most interested in smoking. Blending a cigar with a ring gauge below 40 is rather difficult overall, few truly master it, so let's how the La Colmena Amado No. 36 smokes.

The Amado No. 36 is the smallest offering in the La Colmena line, and as the name implies, it features a 36 ring gauge. It has a length of 6", and is a petit lancero overall. The blend features an an Ecuadorian Deflorada wrapper, and underneath that is an Ecuadorian binder with Nicaraguan Dominican fillers. The cigar has a nice pigtail cap, and a closed foot to add an elegant finish. It features a light Colorado coloring wrapper and it has some Natural qualities present with that. Overall, it is smooth in texture and it shows very few veins throughout. It has a silky texture which is great in hand, and the sot pigtail cap and closed foot are a nice tough. It is giving off an aroma of sweet spices, honey, fruit, and tobacco, and I am eager to light up this cigar. 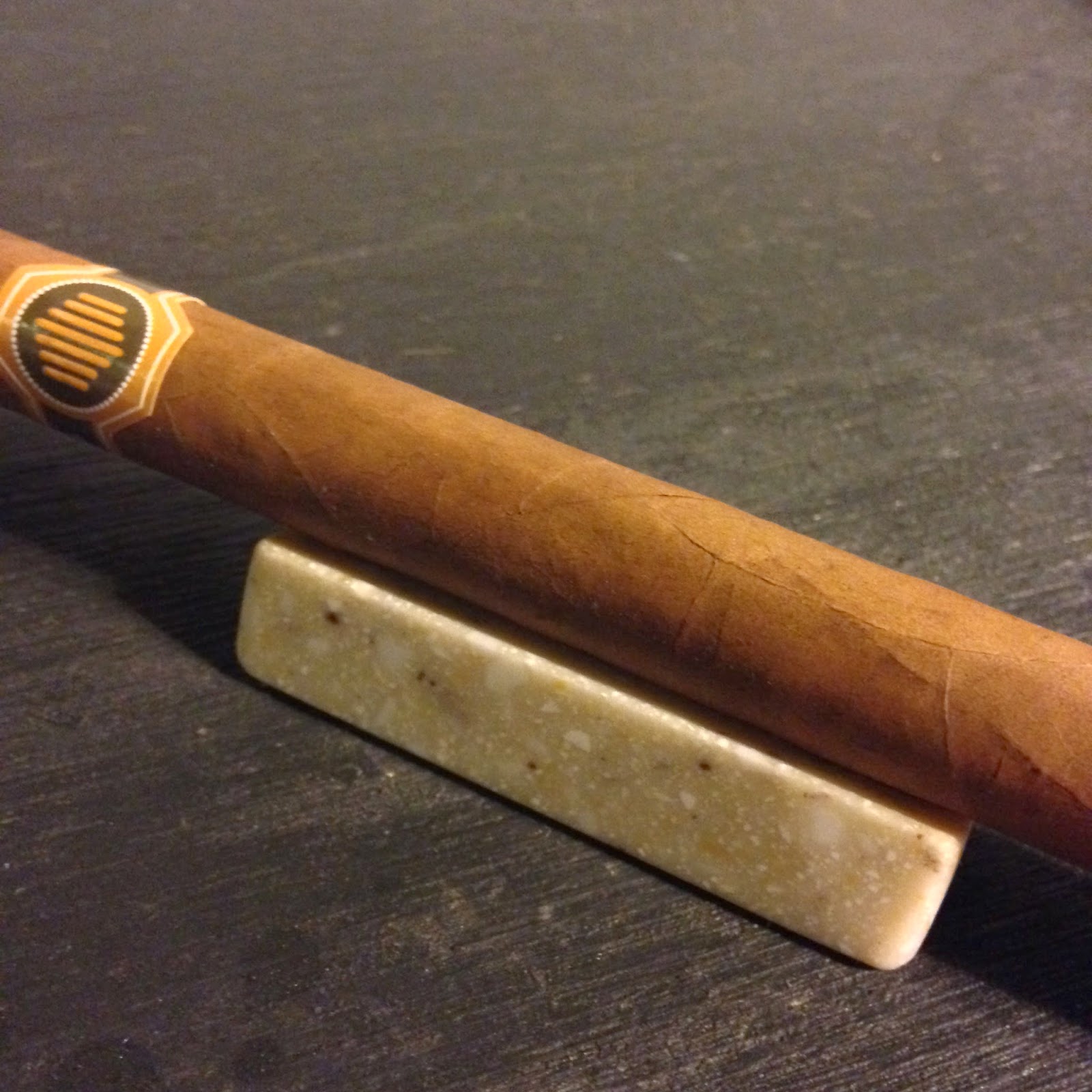 The petit lancero begins by showing some major sweet notes, and that goes for spices and fruit flavors. It has this fruit tart quality, and it is a nice aspect. There is a solid honey flavor profile with that, and I am getting some faint coffee, cream, and cedar notes on the finish. It is great to see how much this blend changes in sizes, and you can really get the wrapper with this blend. The construction is simply fantastic and it is showing a razor sharp burn line with a nice light charcoal ash on the end. The draw is cool and producing a plethora of smoke with that. So far, there is nothing holding this cigar back, and it is another great addition to the line. In terms of strength and body, I would say it is a solid medium, and it is approachable by many smokers, as long as they can get over the small ring gauge aspect. 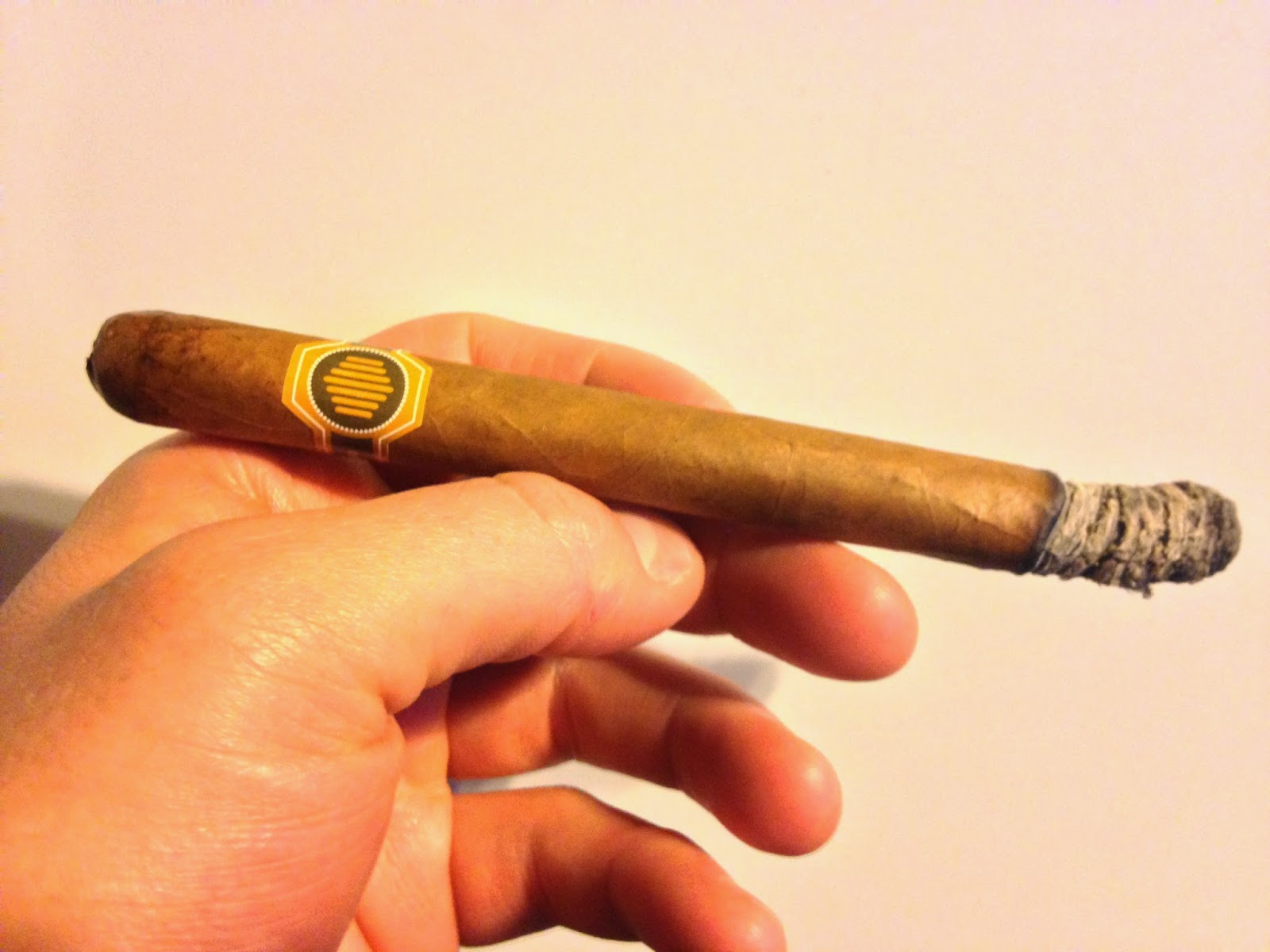 When I get into the second third of the cigar I find that the flavors dial back some and it is not showing those sweet and fruity notes like before. It still has some spice notes present, along with some cedar qualities, but it is not what it once was. There are those faint notes of coffee and cream on the finish though, and it is still very enjoyable. It does have some depth and complexity, and overall this is a great blend that does well in a larger or smaller ring gauge offering. The construction remains top notch in the second third and it is showing that even burn line with a nice light charcoal ash on the end of the cigar. The draw remains cool and smooth, even with the smaller ring gauge, and it is giving off a nice bit of smoke on top of that. The strength and body remain at that medium level as well, and I look forward to the final third. 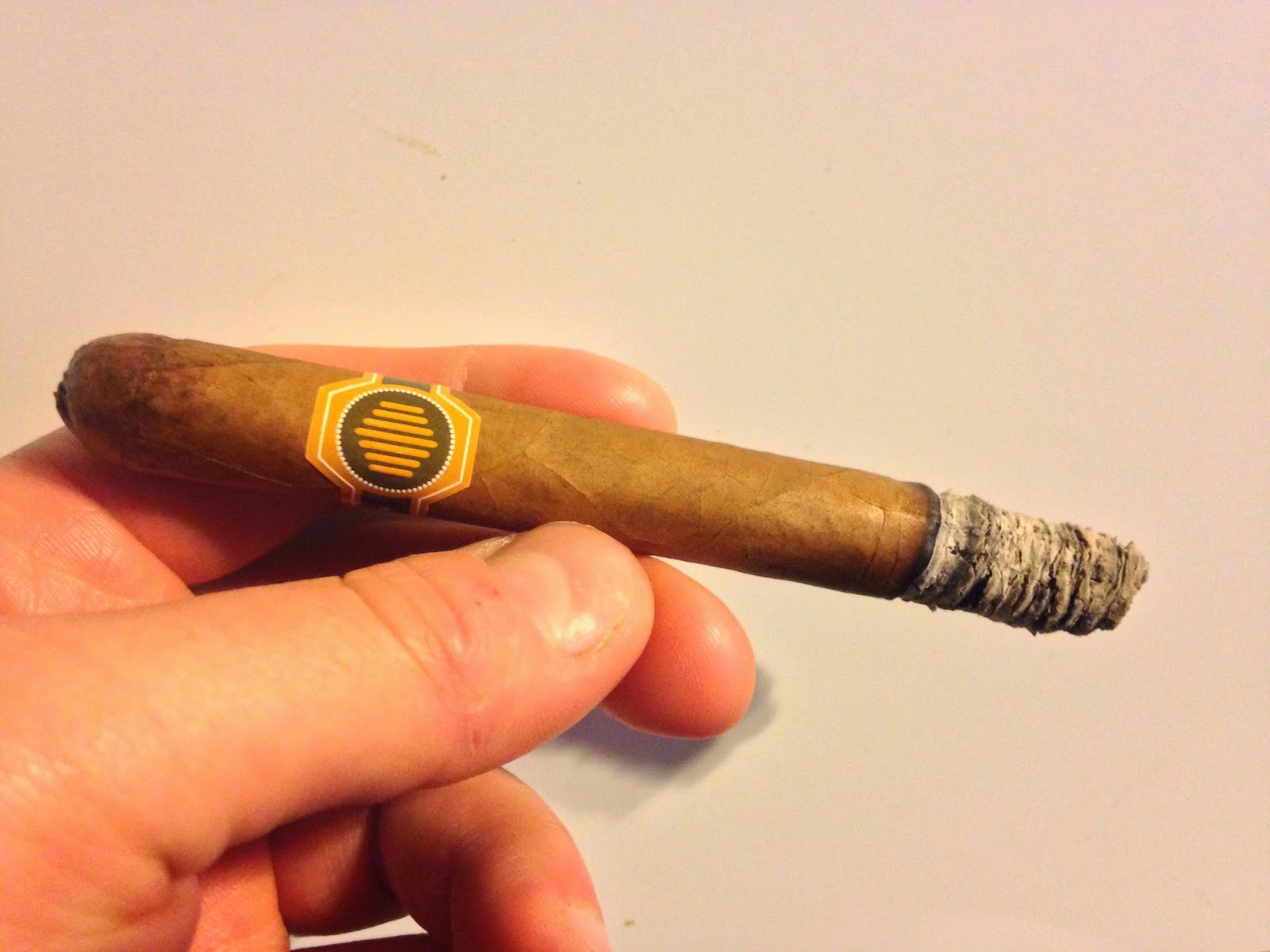 The final third shows some more transitioning and it ends showing some very friendly and natural notes, much softer than the first and second third. There are some tobacco and cedar qualities that are paired with this light creamy aspect, and I am picking up some soft pepper and cinnamon notes with coffee beans on the finish. It is very balanced overall, and it is smooth until the nub. The sweetness is gone entirely, but it does not take away too much from the blend. The construction remains top notch in the final third and it has an even burn line all the way to the end. The ash has that nice charcoal coloring to it, and there is a great deal of smoke being produced with each draw. I smoke the cigar down to the nub, and I mean nub, and it is terrific to the end. I would say that the final third has a strength and body level right around medium, and like the first two thirds, it makes it a very accessible cigar to smoke for many individuals. 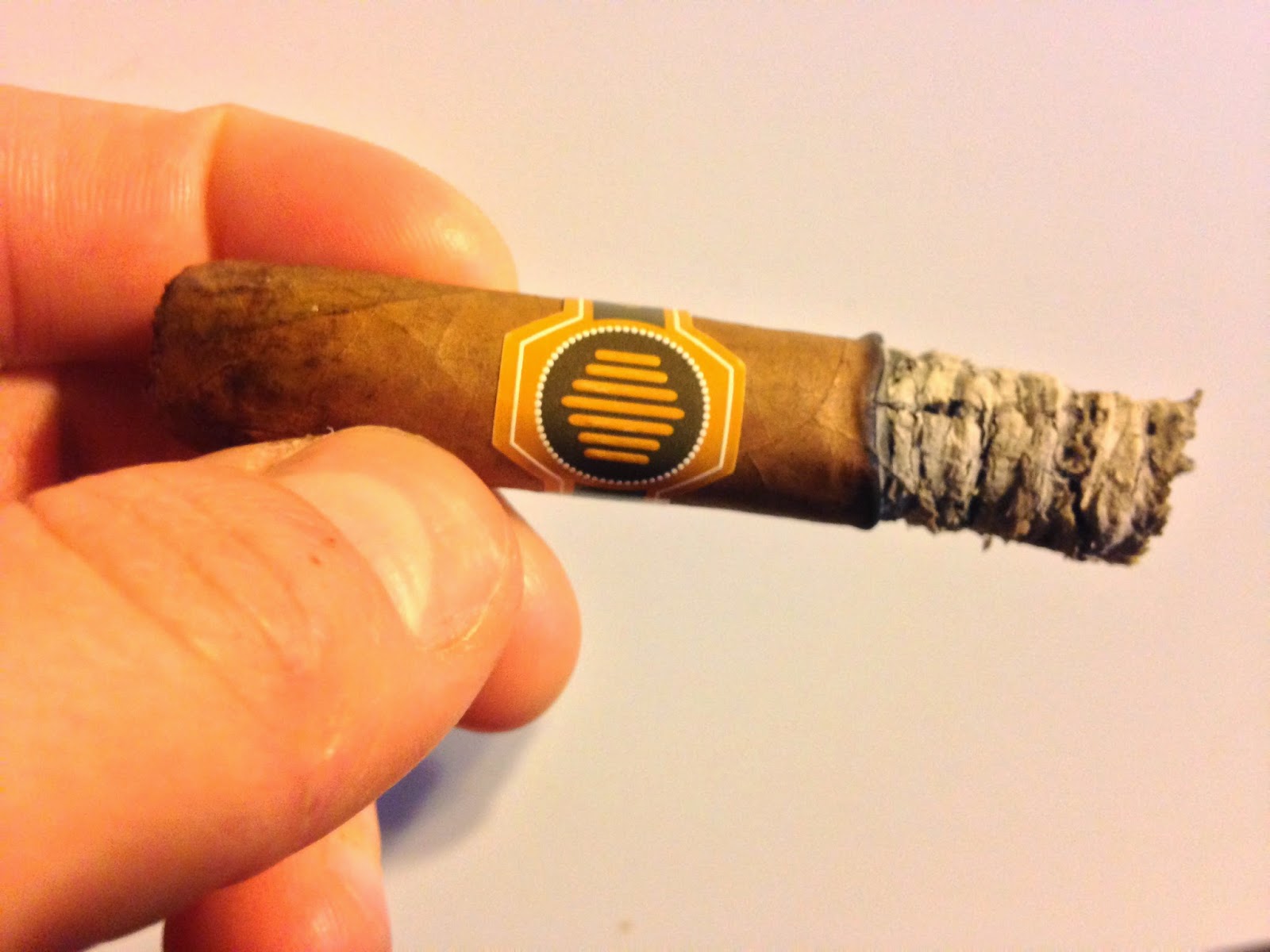 La Colmena is probably my favorite regular production line from Warped Cigars, and while the vitolas are not my preferred vitolas overall, I appreciate the company's passion for small ring gauges and giving the smoker the opportunity to taste the wrapper tobacco being used. I would be interested in seeing how the cigar smokes in a Lonsdale or Churchill offering, and that is because those two offerings are my preferred vitolas. The line features a complex flavor profile that is very unique and old, but at the same time modern. The construction is simply fantastic on every cigar I smoked, and that has been the case with every offering of La Colmena I have had. The draw was cool and smooth, producing a great bit of smoke, and it is a cigar I would have in the morning, afternoon, and or evening. The Amado No. 36 is not my favorite vitola in the line, it is actually my least, but I am still giving the cigar a solid 89 rating and will reach out to it in the future when craving a petit lancero. 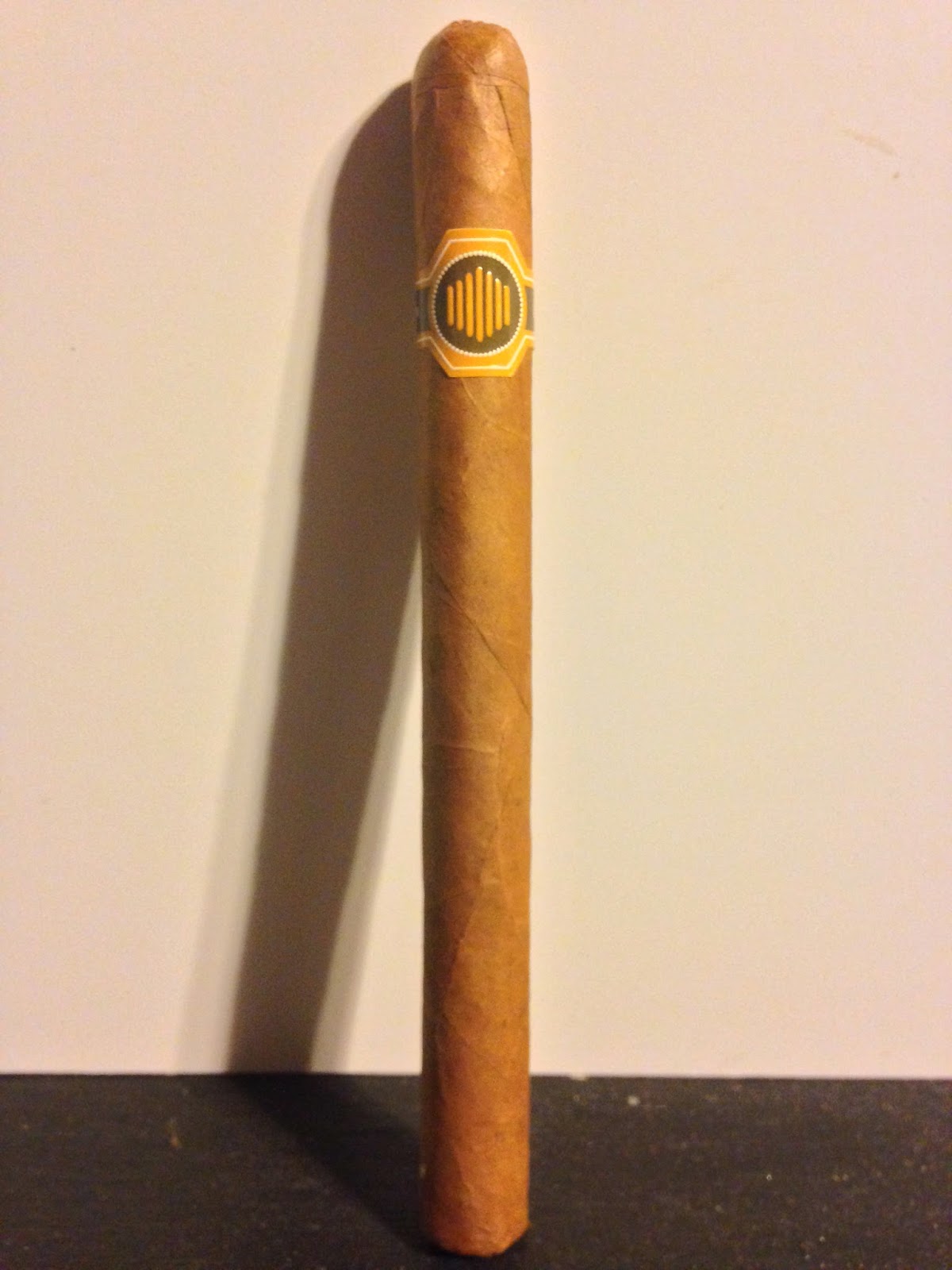