A slightly smaller Churchill, the cigar measures 6 7/8" with a 47 ring gauge. The cigar is draped with an Ecuadorian Rojiza wrapper, and underneath that is a Mexican San Andres Negro binder. The filler is composed of five different leaves: Dominican Piloto Mejorado seco, Piloto seco, a hybrid Olor/Piloto seco, and two seco leaves from Condega and Estelí. The Churchill is rolled quite well and it has a nice cap applied to finish off the cigar. The wrapper is very smooth and silky in texture, and it has a nice Natural wrapper coloring overall. It may show a faint amount of Colorado coloring, but nothing drastic. There are few veins present throughout, and the veins present are medium in size but not a problem by any sorts. The wrapper has an aroma of hay, grass, manure, and tobacco, and the foot is showing some noticeable cocoa and earthy qualities. There is a great cold draw, and I am eager to light up this cigar. 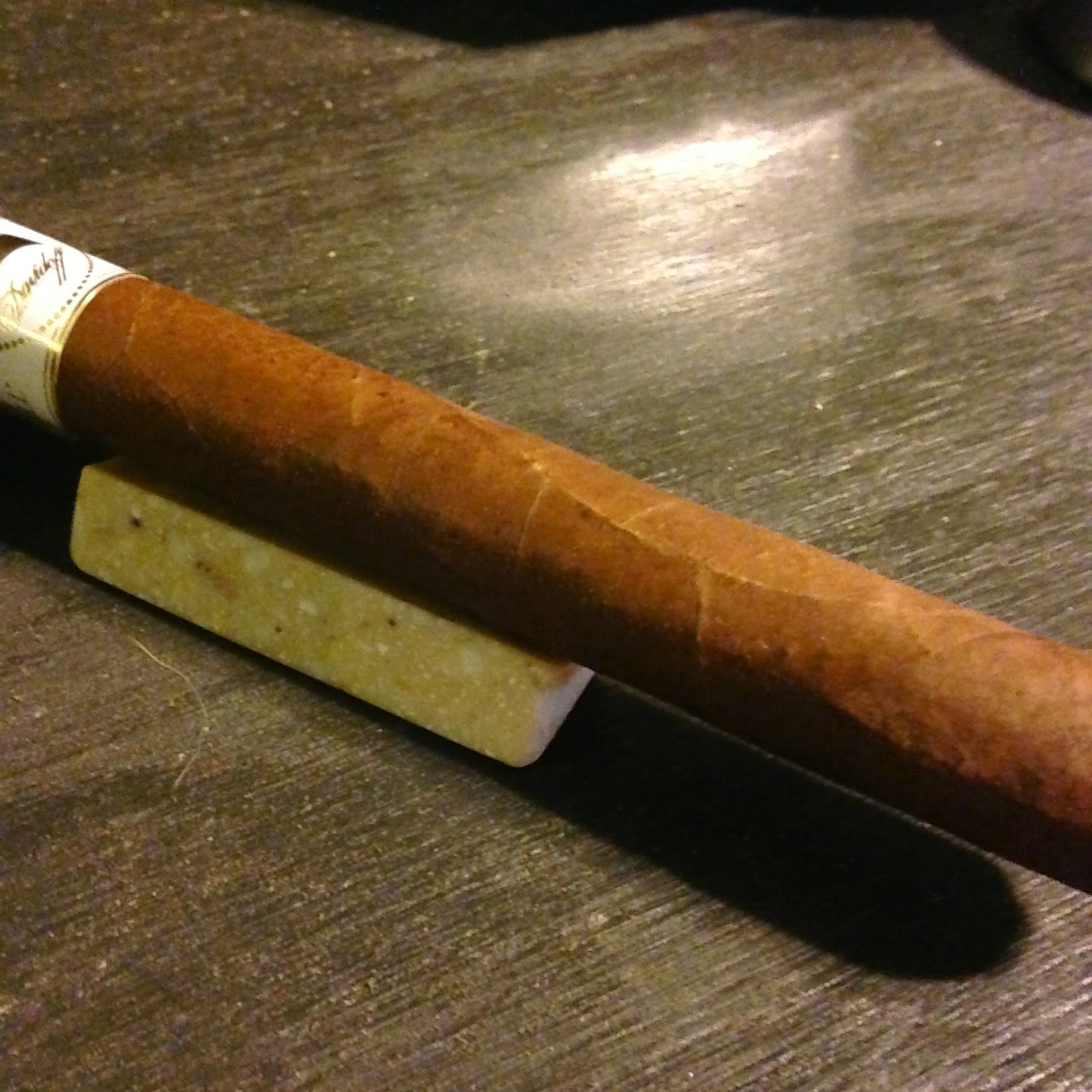 The first third has a tremendous beginning, and it begins by showing some nice raisin and tropical fruit notes. The raisin notes are so distinct, and they are pairing with some pineapple notes that really make for a great experience. There are some earthy notes with that, very rich flavors, and it is accompanied by some spice notes as well. It has a creamy and cedary finish, and it is a great start to the cigar. It is full flavored cigar, and I would say that it is medium-full in terms of body. The strength is right around a medium level, maybe a little bit more, and this is a beauty. This is a complex blend and really a great Davidoff blend at that. The construction is top notch as well and it is showing a near perfect burn line with a nice charcoal ash on the end. The draw is cool and smooth, and there is a nice bit of smoke being produced as well. 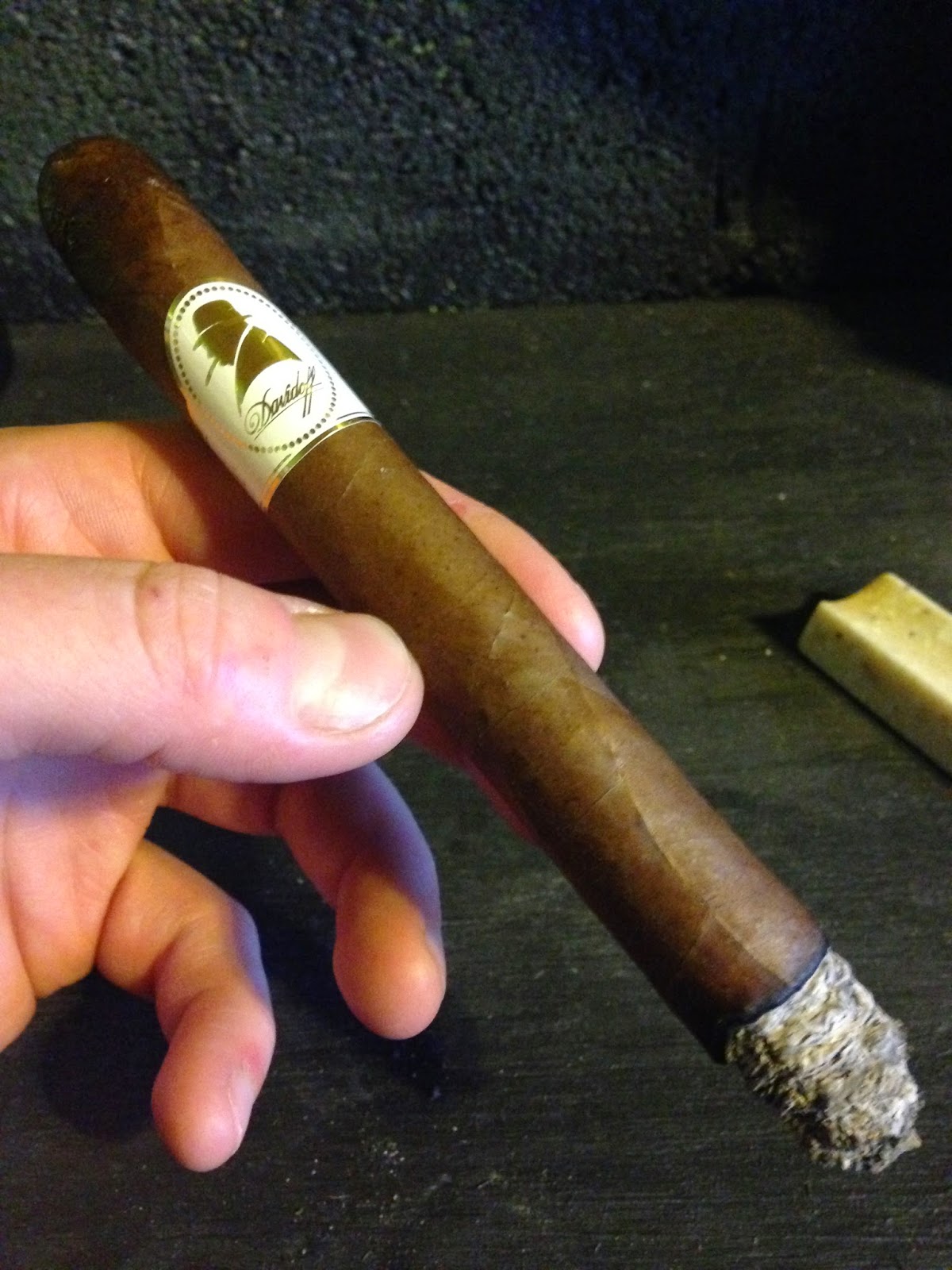 When I get into the second third of the cigar, I find that there is a nice transitioning in flavors. The raisin qualities have faded, along with the tropical fruit notes, but I am left with a nice smokey and lemon flavor profile. There are some toasty and nutty qualities present as well, and it has an earthy and black pepper finish which is very enjoyable. So far, it is shown a nice bit of transitioning, and it has a nice bit of depth and complexity. It is very different than a lot of stuff Davidoff has done, and that stems from the fact that it is not Dominican focused. The construction is nothing but incredible and it is showing an even burn line with a light charcoal ash on the end. The draw is cool and easy, and there is a good bit of smoke being produced with that. I would classify the strength as being medium in this third again, and the body is at a medium-full level. 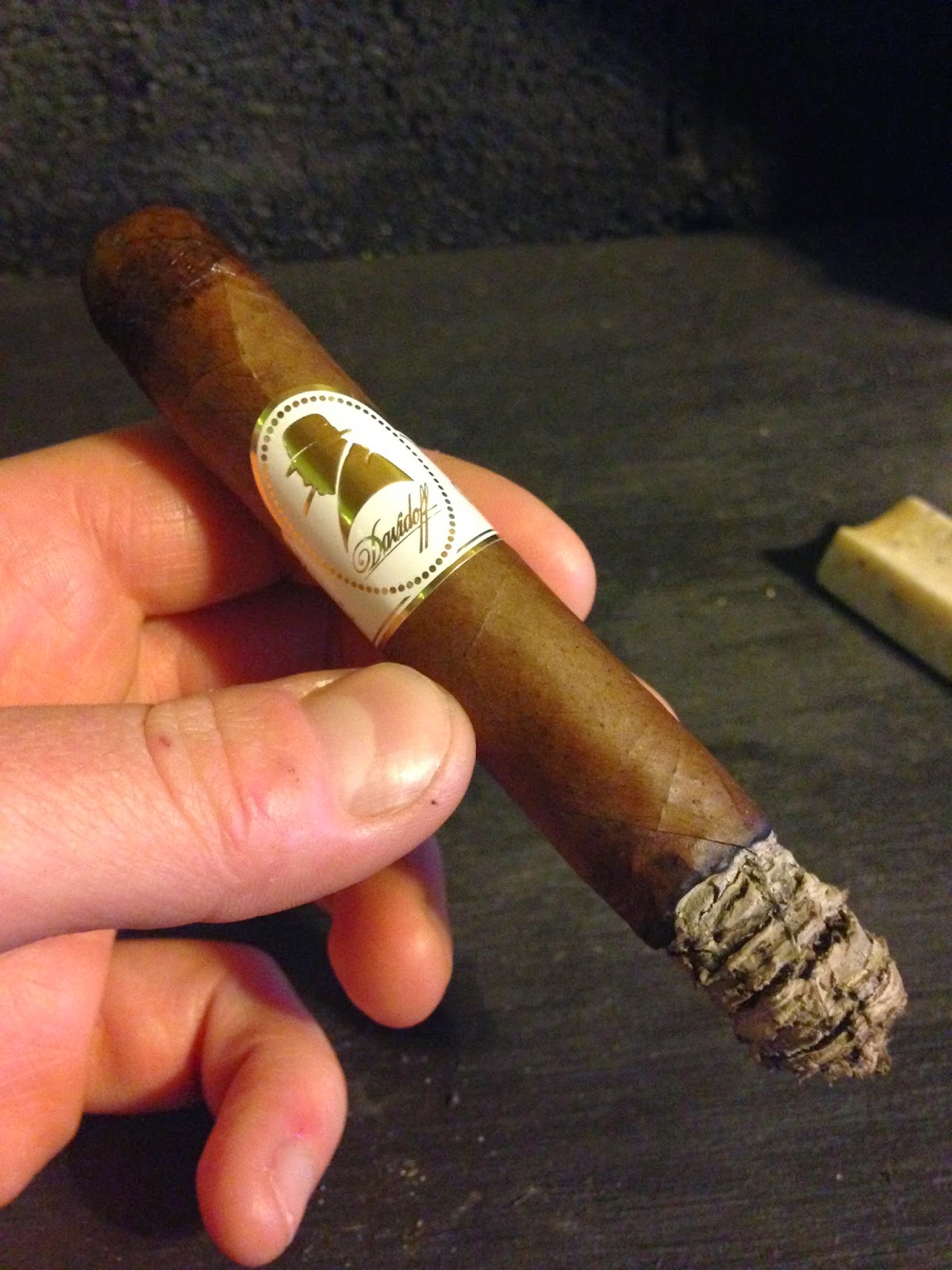 I am in the final third of the cigar now and it is showing some more transitioning in the flavors. It is delivering those citrus notes from the second third and I would say they are more lemon focuses now than before. It has some sweet cedar notes with that, and it is a nice combination of flavors. There are some toasty and nutty note on the finish, and there are some slightly harsh hay and grass notes with that The construction remains top notch though in the final third and it has an even burn line with that light gray ash on the end. The draw is cool overall and with each draw is a nice bit of smoke being produced. It smokes cool to the end, and it shows those solid flavors to make for a lovely finish. The body and strength are at a level between medium and medium-full in this third, and it is a nice way for the cigar to finish. 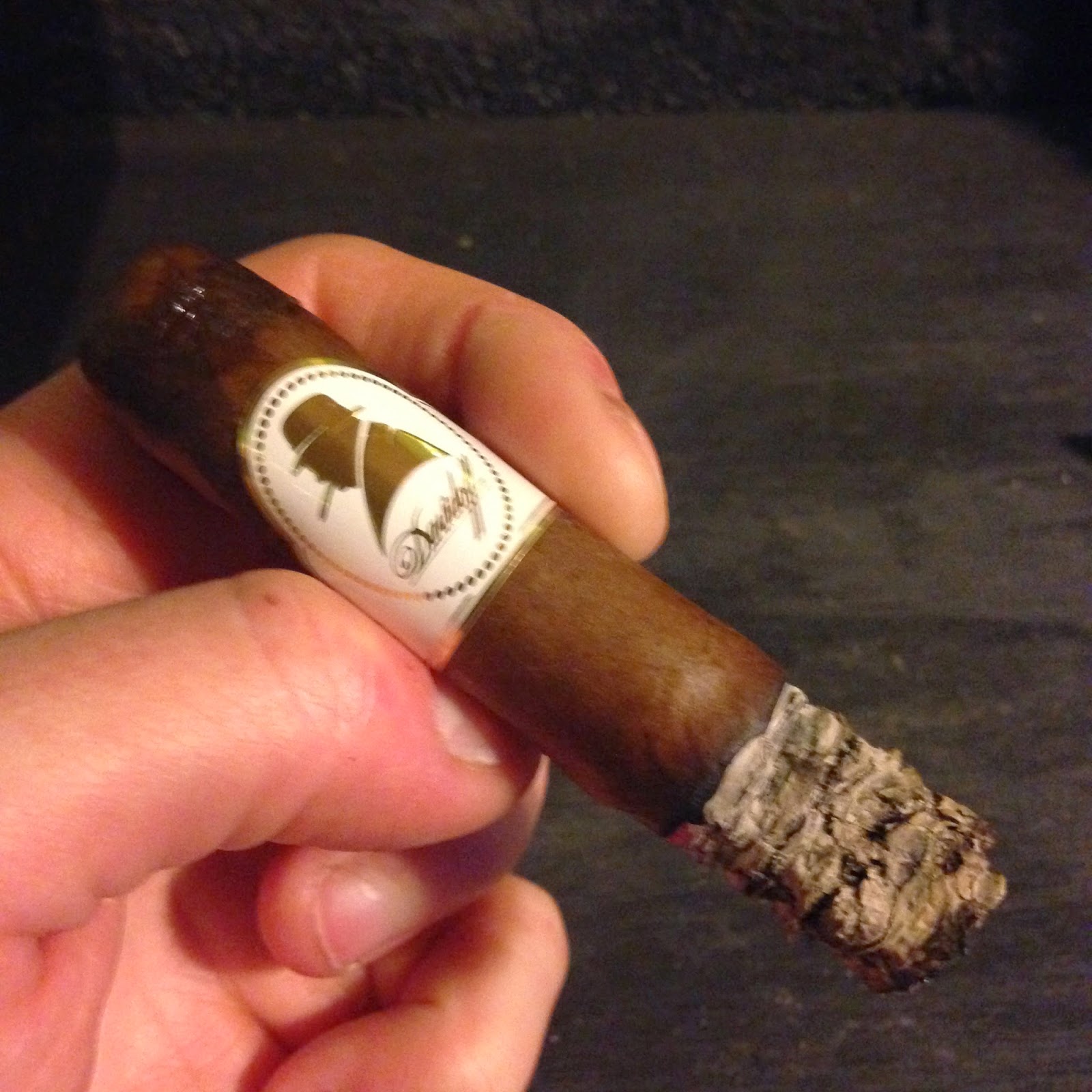 The new Winston Churchill is a fantastic cigar and a great new release from the company. To me, it is far superior to the original Winston Churchill, but at the same time very different. This is a very "non-Davidoff" Davidoff. and with the tobacco being used it is something new for the company. In some ways, this is the most exciting blend from Davidoff that I have had in a while, and that is because it is very unique. The flavors delivered are complex, showing a lot of transitioning throughout, and it has a nice bit of depth with that. The construction is nothing but spectacular, and it shows an even burn line with a solid charcoal ash on the end. The draw is cool from beginning to end, and with that is a nice medium-full strength and body level. With a better price, and a new blend, I think this cigar will be very successful and begin to grab the attention of many more smokers. I know I look forward to my next one, and I am eager to light up the line in different vitolas. The cigar gets a solid 91 rating. 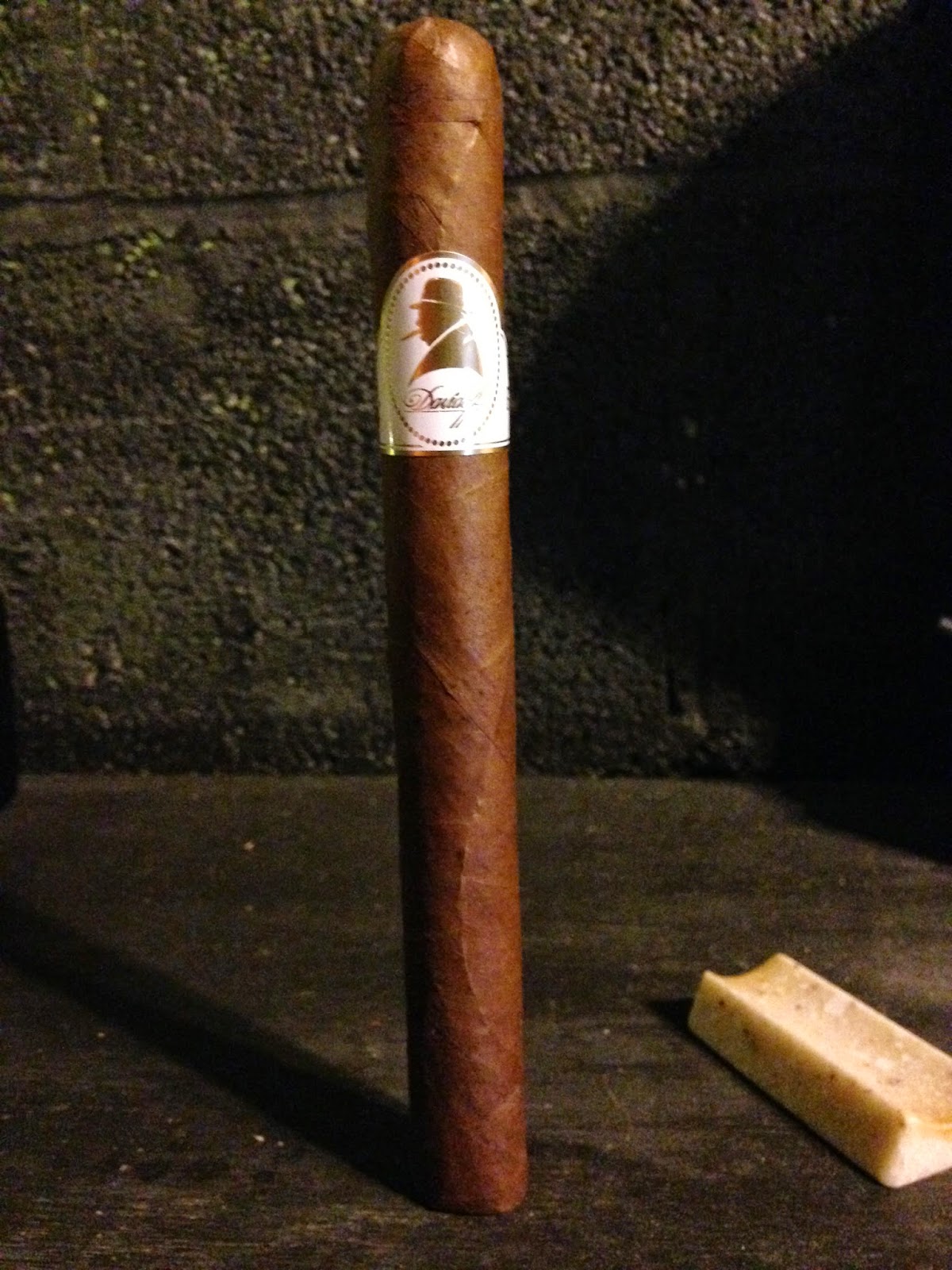