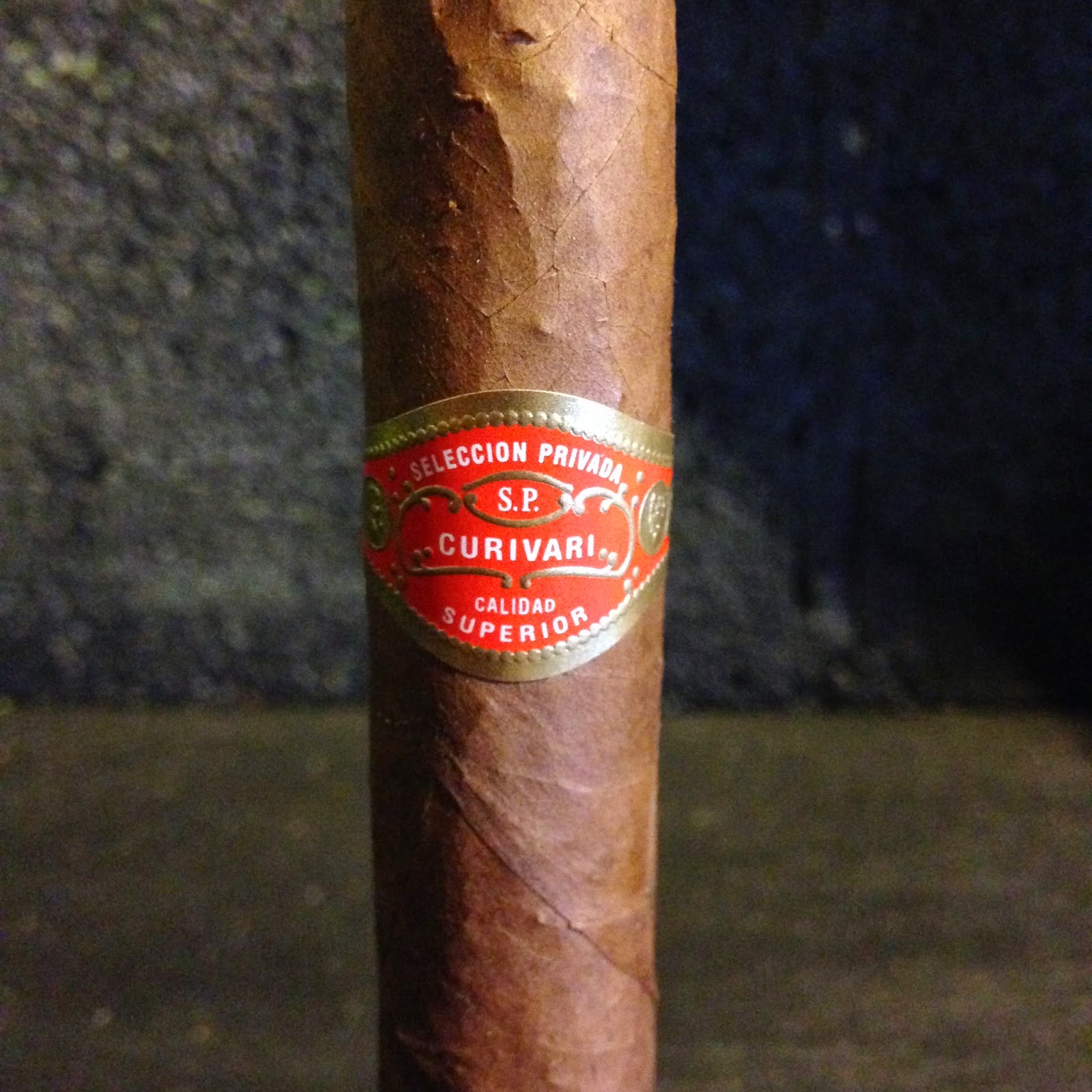 Curivari is one of those true boutique brands that is so boutique, many people don't talk bout them or even smoke their product. Their product can be challenging to find, that is part of the problem, and finding a retailer that carries them and has them in stock regularly is nearly impossible. Seleccion Privada is a line of theirs that has been on the market sine 2010, and to many people, it has been classified as a Nicaraguan version of the Cuban Partagas. I think that comes from the band appearance and not the actual cigar, but more often than not, that is what I hear and see when people are smoking these cigars. I personally never thought of it like a Partagas, though I still enjoyed it, but to this day I hear people continuously say it reminds them of a Partagas. I am not here today to say whether it is or is not similar to a Cuban Partagas, but merely to smoke the cigar and provide my thoughts per numerous requests.


For this review, I went with your standard robusto, and the robusto measures 5" with a 50 ring gauge. The cigar is a Nicaraguan puro, and is composed of Cuban seed Criollo and Corojo tobacco. Production takes place in Nicaragua, and the presentation is simple and very reminiscent to the older Partagas bands.  There is nothing about Curivari products that is wowing, but in simplicity is beauty I always say. The wrapper on the cigar is slightly smooth in texture, and it shows a little bit of grit here and there. There are some medium sized veins present throughout, and the wrapper has a nice Colorado coloring overall. It is firm from head to foot, and is finished with a lovely cap. There is an aroma of oak, vanilla, spices, and tobacco, and it is very balanced. I am getting a great cold draw with the cigar, so let's light up this stick. 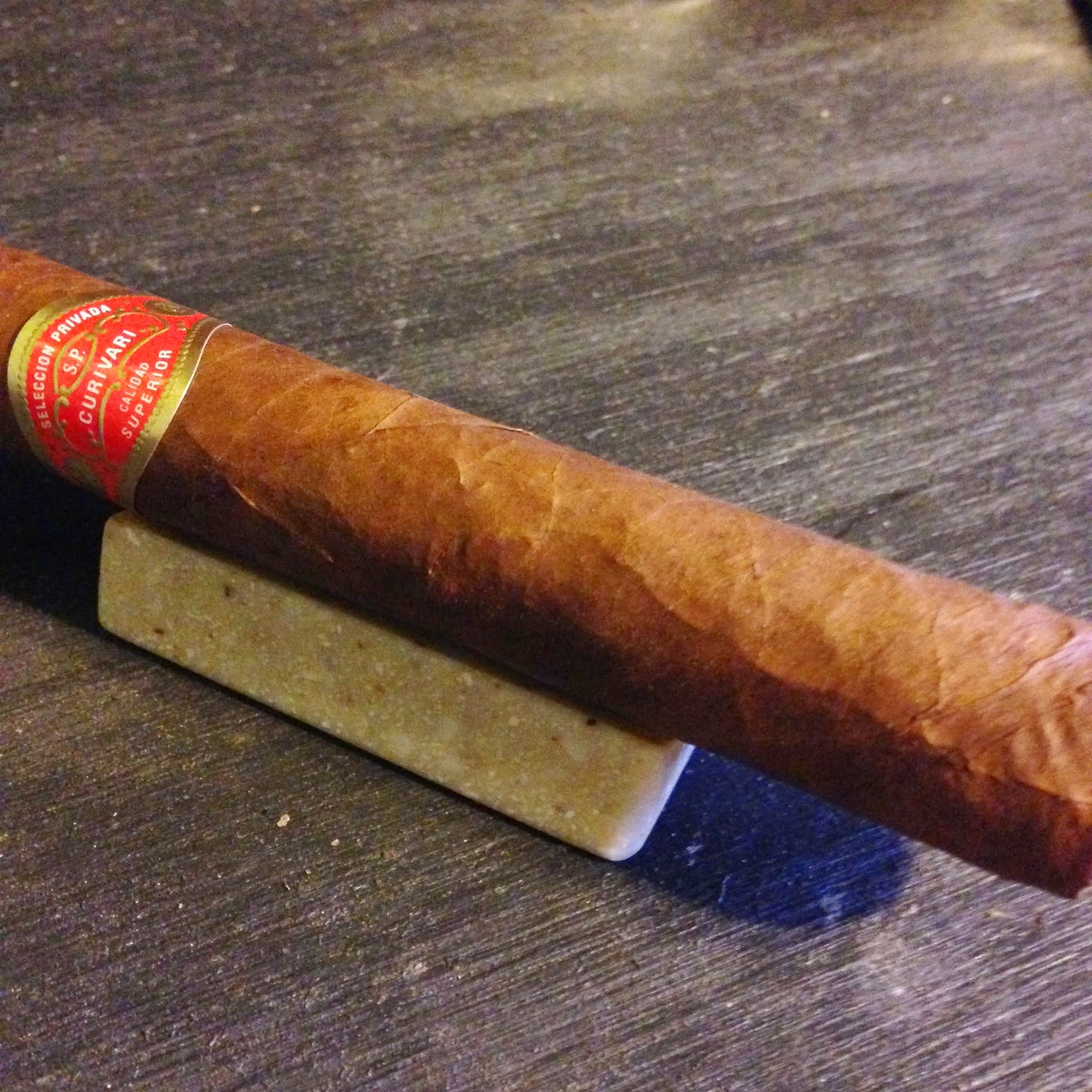 The first third opens up by showing some soft spice notes, and it is accompanied by some toasty and nutty qualities. There are some earthy aspects present as well, and it has some faint stone fruit notes that are more  that of peach and nectarines. There is a nice sweet white pepper finish to the cigar, and it is a flavorful first third. The construction is top notch thus far and it is showing an even burn line with a nice charcoal colored ash on the end. The ash is holding on firmly to the end, and I am getting a solid amount of smoke with each puff. I would classify the first third as being medium overall in terms of body, and the strength is slightly below that. It is a flavor focused cigar, and an enjoyable one at that. I am really looking forward to the second third. 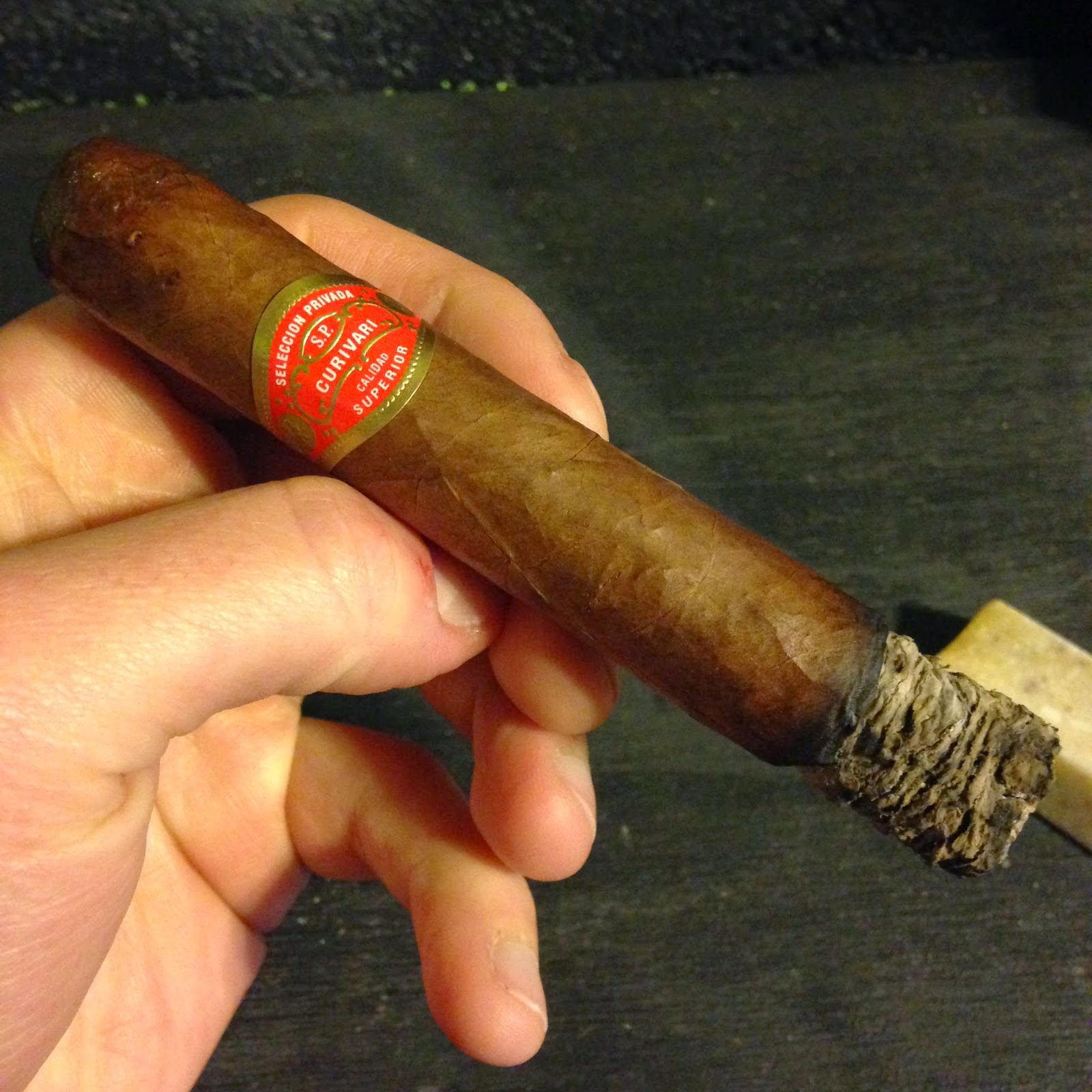 When I get into the second third of the cigar, I find that there are some new flavors present, and I am getting some oak and vanilla notes. They are pairing with those lovely spice flavors from the first third, and the white pepper notes are still present. Bits of stone fruit are mixing in with that, and it leaves a nutty, toasty, and earthy finish. The construction remains top notch in this third as well, and it is showing an even burn line with that charcoal ash on the end. The draw is smooth and cool, and there is a nice bit of smoke with each draw. The retrohale is fantastic, and this is a complex smoke with a lot of depth. I would say that the cigar is remaining at a medium level for both strength and body in this third, and I am loving every aspect of this smoke. 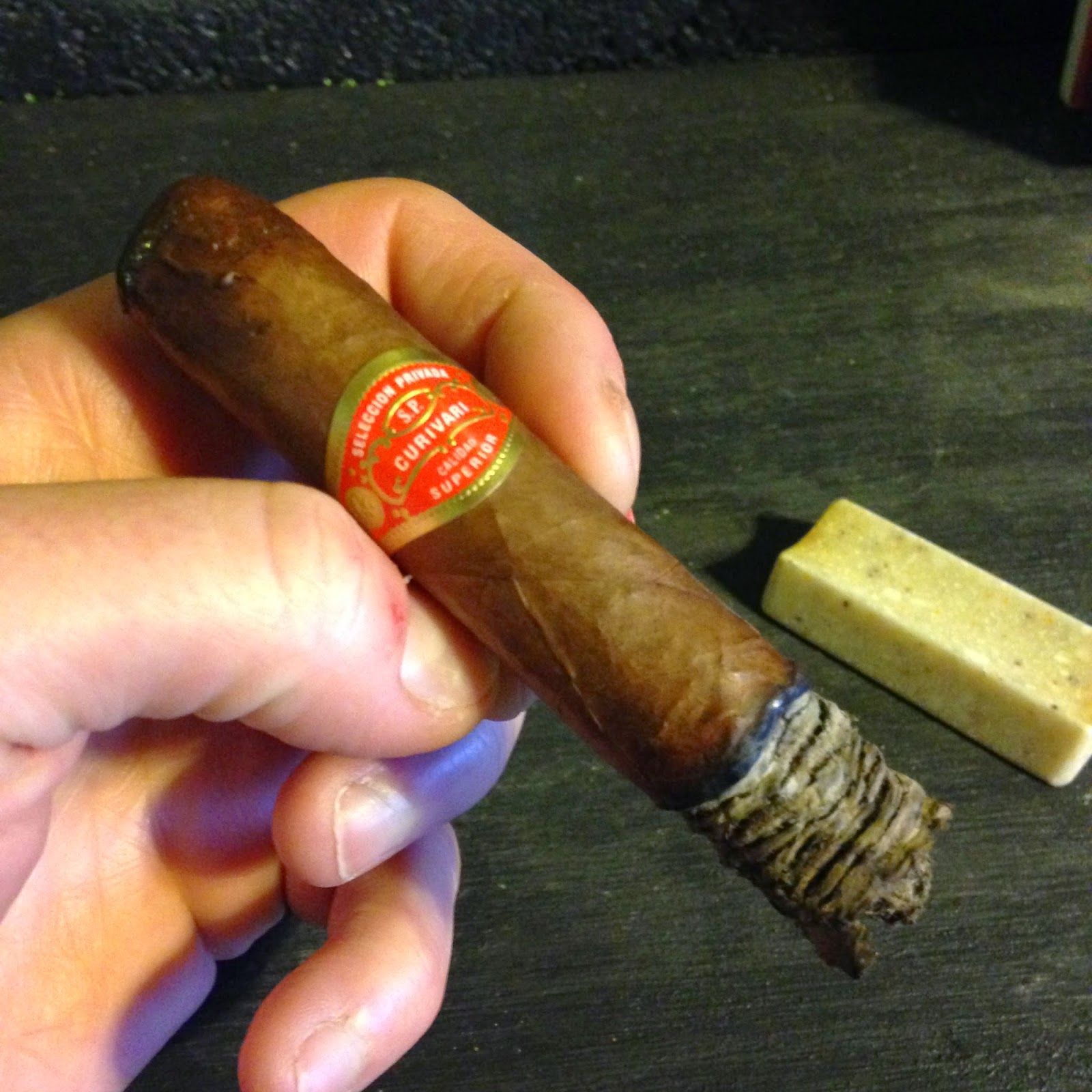 The final third shows some transitioning in flavors and it has a nice finish overall. It is showing some oaky notes with spices, and I am getting that white pepper flavors from before. There is a nutty and toasty quality present as well, and it has a nice finish of coffee beans and earth. The stone fruit notes are not present in the final third, but with what is present it is very enjoyable and more than satisfying. I would say that the cigar is smoking at a medium level for strength and body in this third, and it is a complex cigar with a great level of depth. It has had transitioning since the start, and this is what a great cigar should do. The construction remains perfect in the final third and it is showing showing an even burn line with that solid charcoal ash on the end. The draw is cool to the end, and flavorful to the nub. 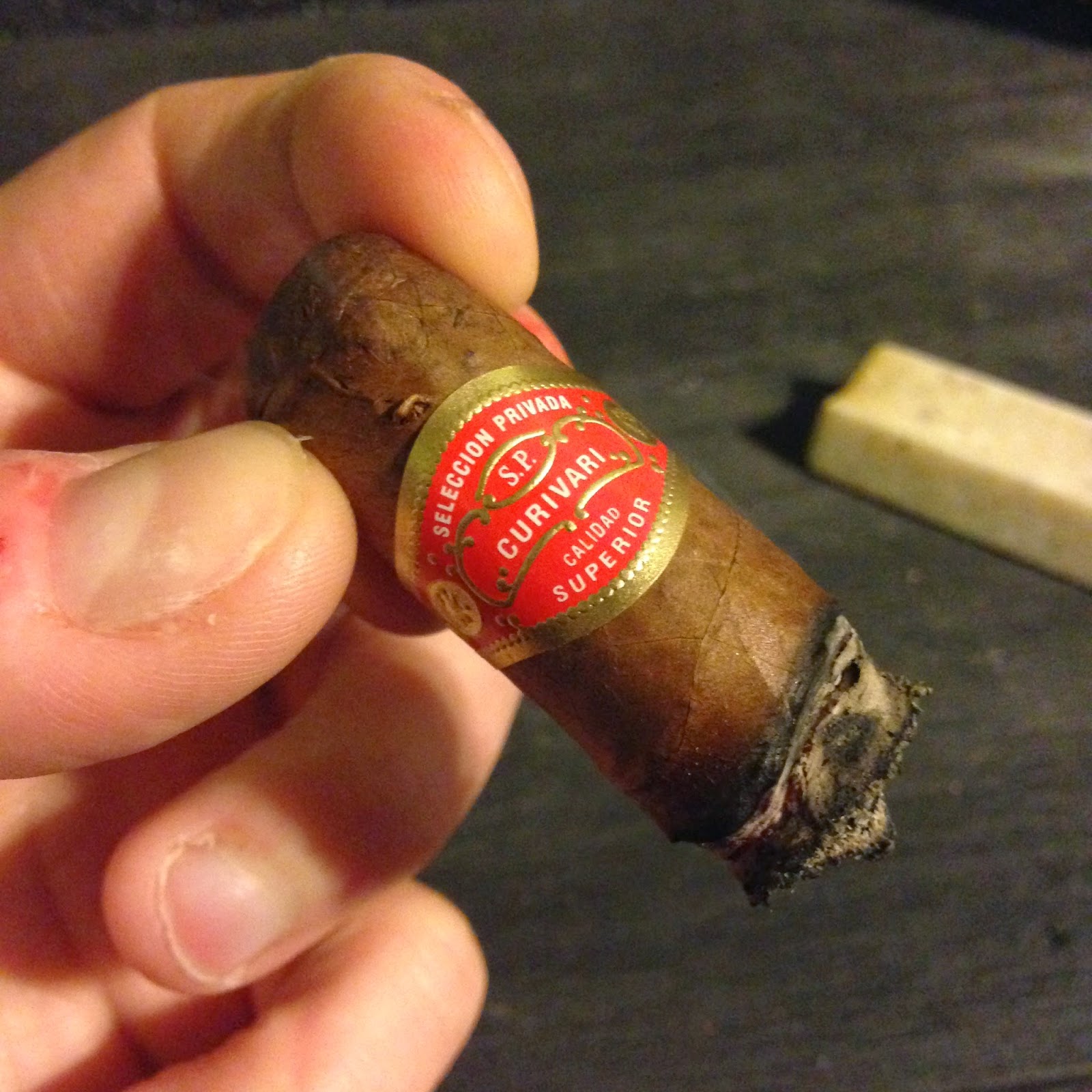 The Seleccion Privada is a solid line and another great Nicaraguan puro from Curivari. Curivari has a nice collection going for them, but with those nice set of releases is a very limited number. I always enjoy smoking them when the opportunity presents itself, but given that they are limited in production and not around all the time, it is hard to make them a daily smoke. I think Seleccion Privada is right in line with El Gran Rey in terms of ranking, and that is where the brand typically lies overall. The construction was top notch throughout the entire smoking experience, and the flavors very enjoyable as well. I find that a majority of their smokers are medium body and strength smokes, and that makes them appealing and friendly to a lot of smokers. The cigars are very price friendly though, and with them coming in ten count boxes, it makes them very approachable for box purchases. Overall, I give the cigar a solid 88 rating. 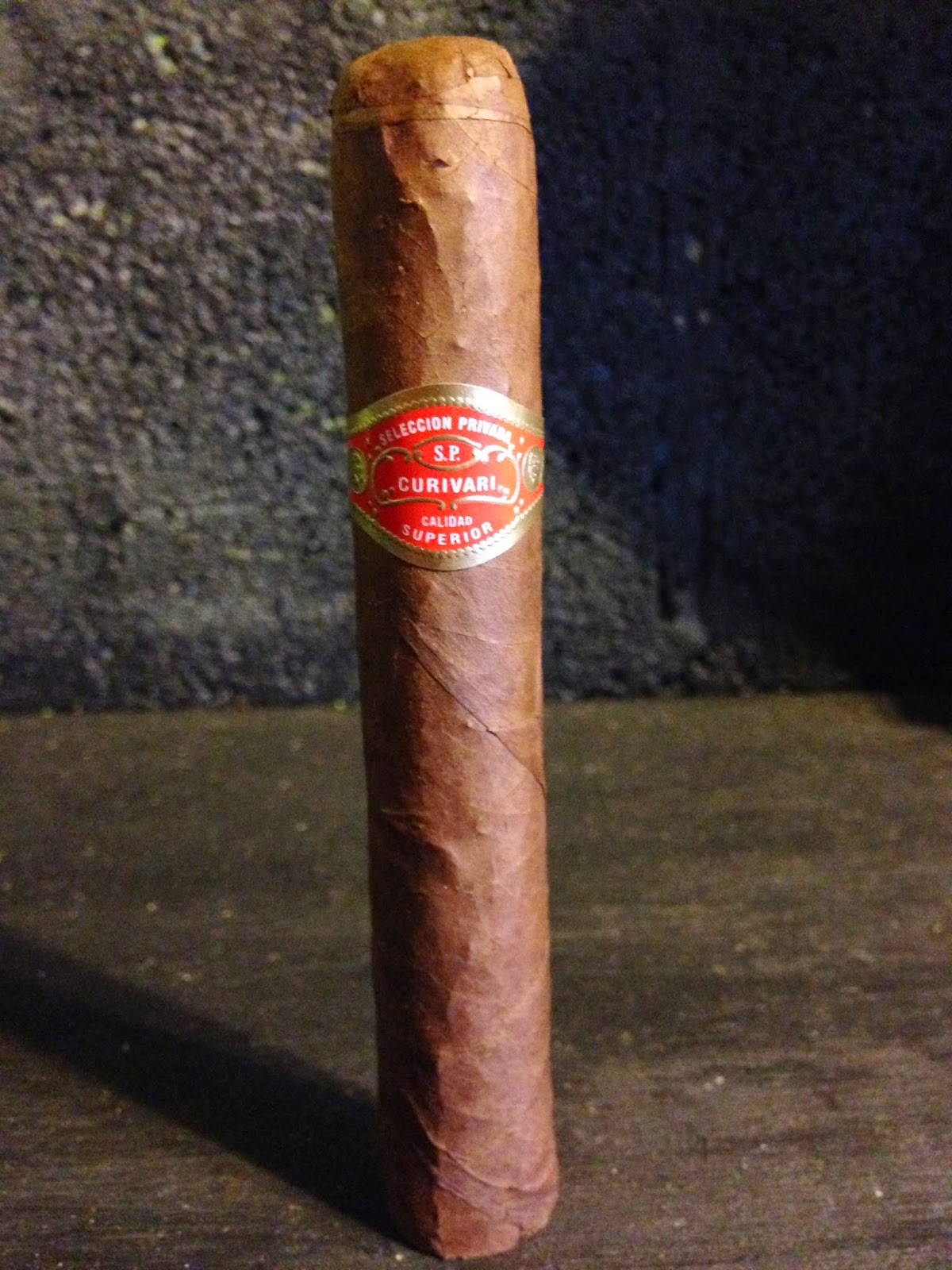