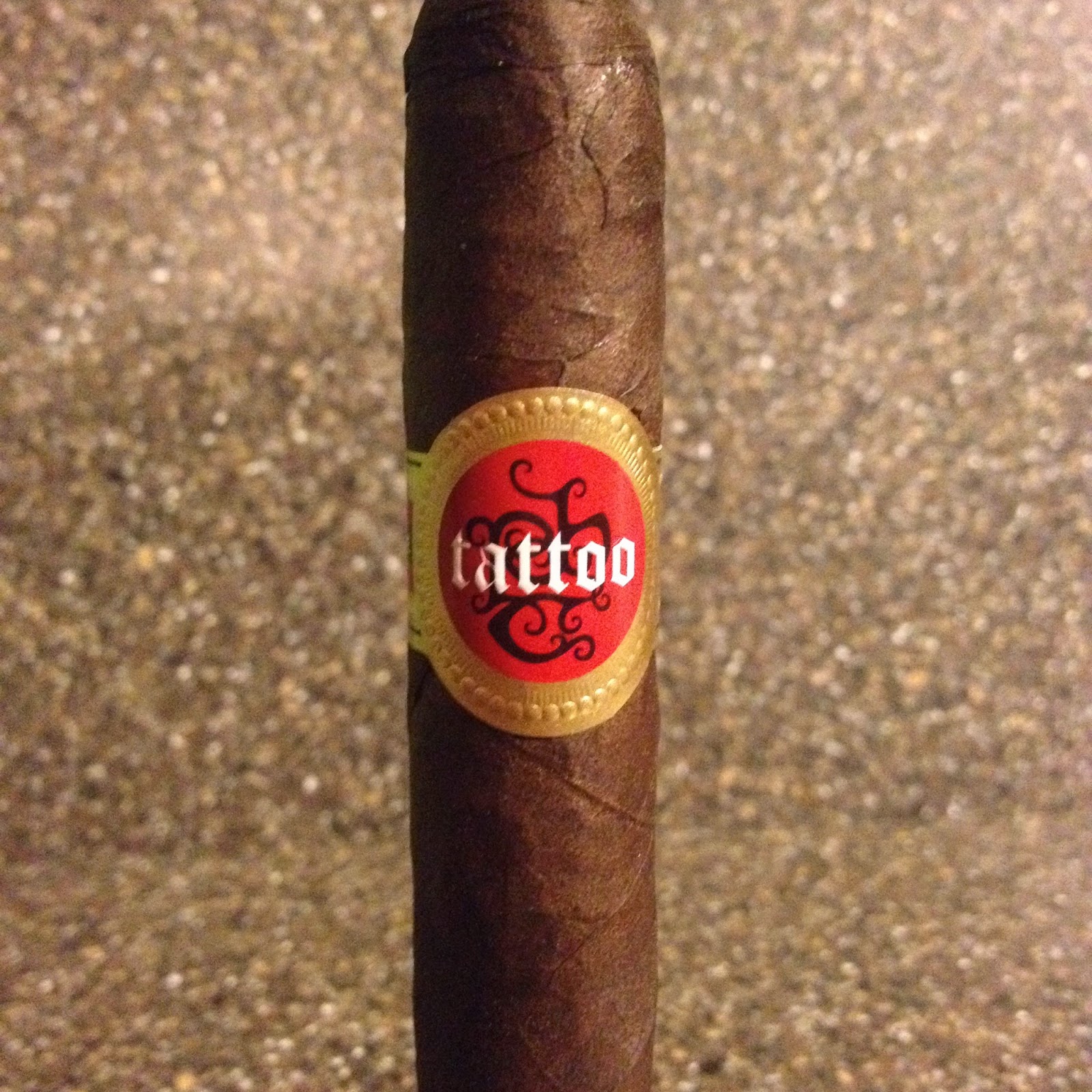 When I first saw the name Tatuaje Tattoo, the first thing that came to mind was the movie Mickey Blue Eyes with Hugh Grant. In the movie, Grant's character is about to marry Jeanne Tripplehorn's character and her father, played by James Caan, is an Italian mafia head who for cover owns a restaurant called The La Trattoria. Grant makes the obvious comment, you know your father has a restaurant called "The the Trattoria," to which Tripplehorn's character says yes, I know in a less amused tone. For some reason, that scene of the movie comes to mind when I think of this cigar and while it may not come off as positive for the cigar I am about to review, I really enjoyed the movie. Anyways, today I look at the Tatuaje Tattoo Caballero, and see how this budget friendly release is for Tatuaje Cigars.

Made at My Father Cigars sister factory in Nicaragua, Tabacalera Cubana, Tattoo is a release that is intended to be very budget friendly. I don't think his company has a problem with releasing cigars at an affordable price, but this is significantly less than others. The cigar features an Ecuadorian Habano wrapper, dark one at that, and are is then completed with a Nicaraguan binder and filler blend. For this review I went with the Caballero, Spanish for knight/gentleman, and the cigar measures 5" with a 50 ring gauge. This was the early release size, as the other three sizes were featured at the IPCPR this year. Construction is fairly solid on the cigar and it features a dark wrapper that is maduro in coloring. It has some veins throughout with a texture that is slightly oily. The cigar has an aroma of rich earth, dark spices and cherry notes, and that is present on the foot and the wrapper. 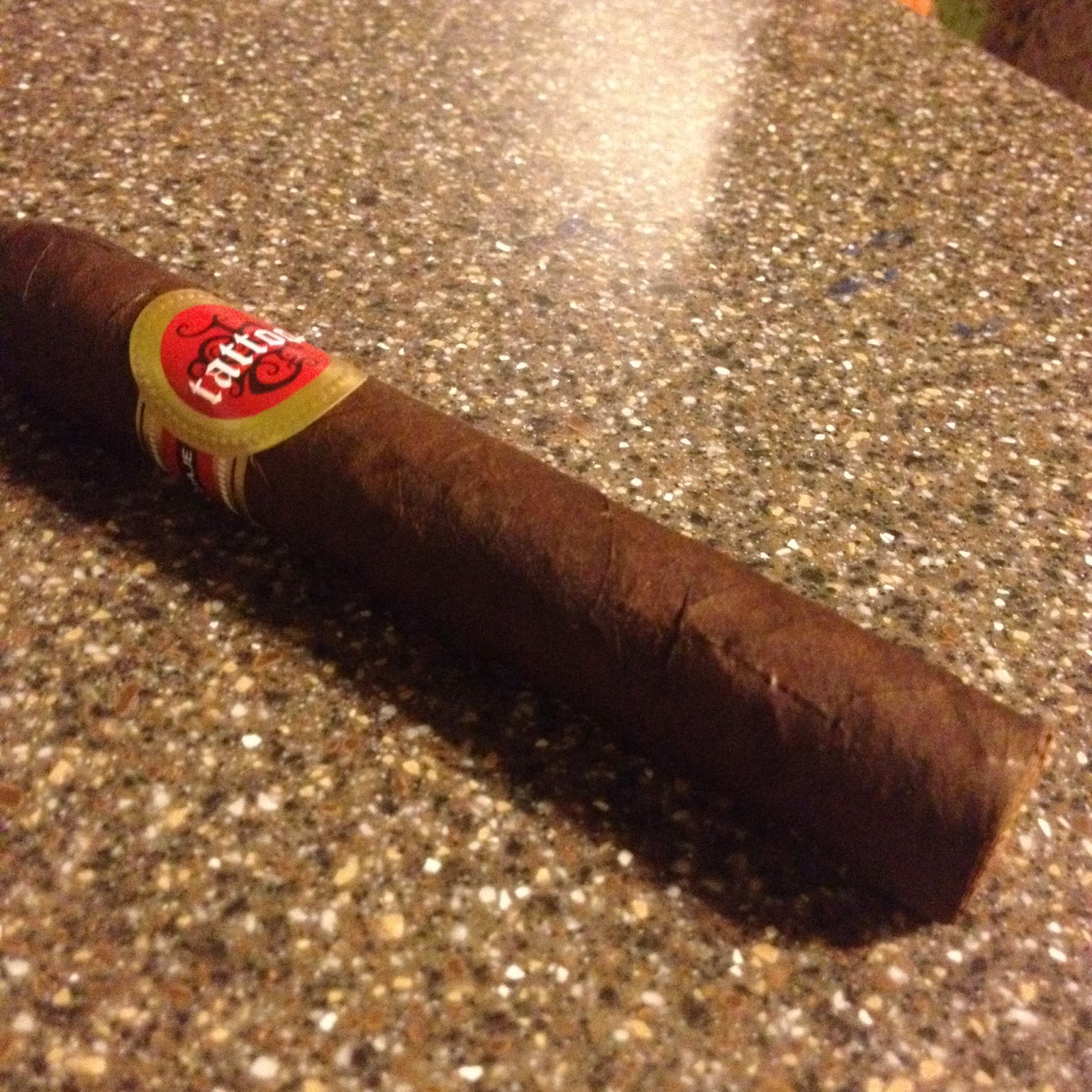 Lighting up the cigar, it begins by showing some noticeable spice and pepper notes. They are very present and they really announce themselves on the retrohale. The flavors are accompanied by some oak notes and it has this rich earth and dark cherry flavor profile present as well. The flavor profile is very bold and overall I am enjoying the cigar for what it is. The strength is very present with the cigar as well and it is at a full level which is overwhelming the flavors in some ways. The body is closer to medium full and this is an afternoon or evening cigar for me with the qualities present. In terms of construction, the cigar is showing a nice burn line that is not perfect, but a little uneven in parts. It's producing a dark charcoal ash that is holding on well at the end and there is a slot of smoke being produced. Overall, it is an entertaining cigar and for the price I can see why so many guys enjoy the cigar. 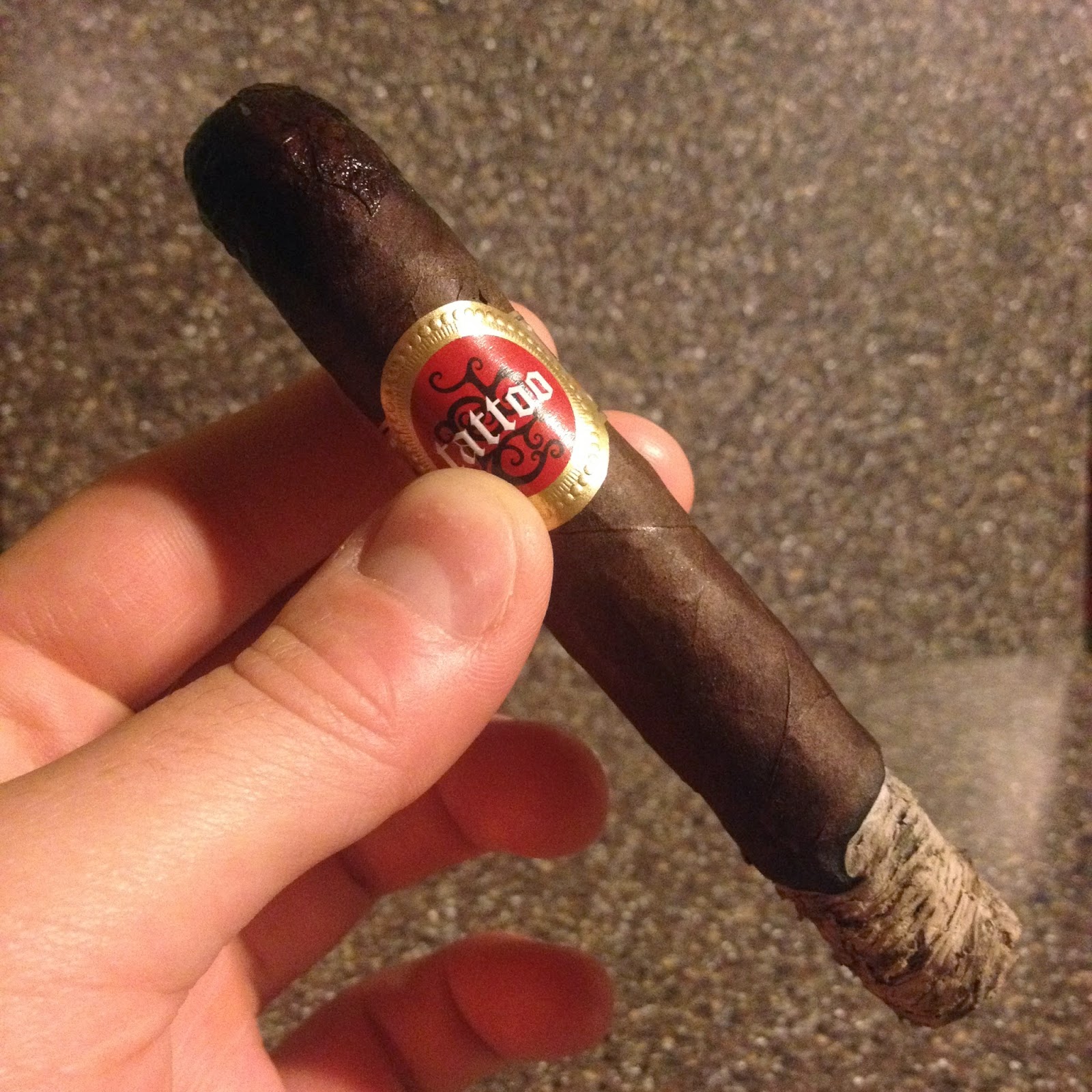 When I get into the second half of the cigar I find that the flavor profile is fairly similar to that of the first half and it is a strong flavor profile with a stronger strength level. I did not expect the cigar to be this strong when I went into it, and it is showing some Fausto qualities with the strength present. I am picking up some noticeable strong oak notes in this half, and it is accompanied by some dark earth and spices with that. There is some noticeable tobacco qualities present as well, and it has a finish that is showing some dark cherry notes, but not an abundance of them or in a strong format. The strength and body are now at a full level, and while the strength was there from before, the body is now present there and this cigar is going the limit. In terms of construction it is smoking at the same degree as it was in the first half and it is showing a burn line that is a little uneven and with that a dark charcoal ash on the end. The draw is cool and at the end of the cigar are those strong flavors and powerful strength. 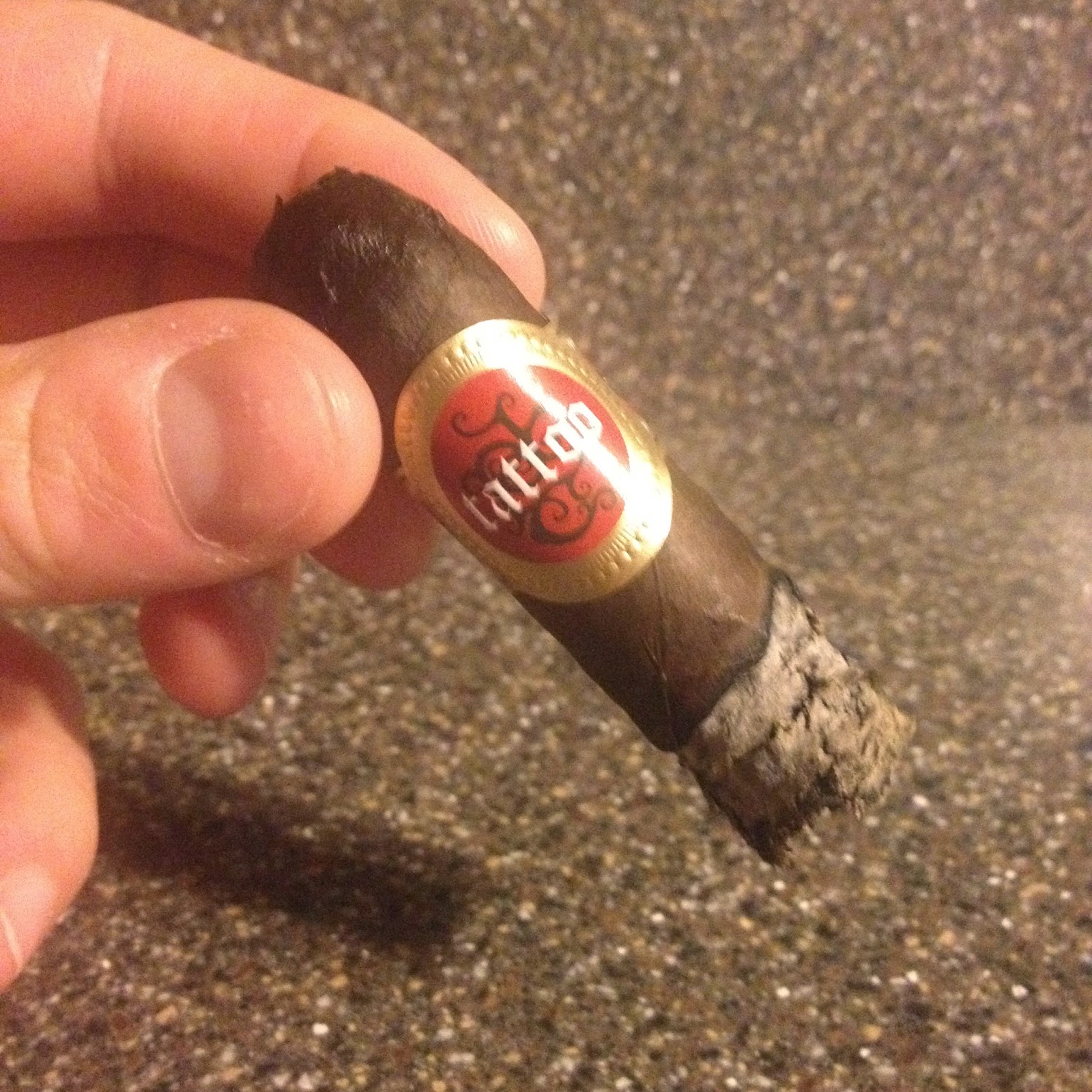 I am truly enjoying watching manufacturers release these budget friendly smokes in 50 count cabinets. I would love to see more manufacturers get in the competition because you never know what you are going to get, but I am not holding my breath. Right now Dion is leading the pack in my opinion, but I know a lot of Tatuaje guys who would say otherwise. But let's be real, they are Tatuaje guys. The Tattoo is enjoyable, not my cup of tea, but an entertaining smoke that is producing some stronger flavors with a hell of a strength and body level. I really have no interest in smoking the other vitolas in the line, I think he should have just kept to the one, but Pete likes to please the masses so what am I going to say about that. Overall, I am giving this cigar an 89 rating. I am glad I smoked some, they were entertaining, but I would not count on myself getting more down the road, especially a cabinet. Who knows though, maybe age would be great to these sticks. 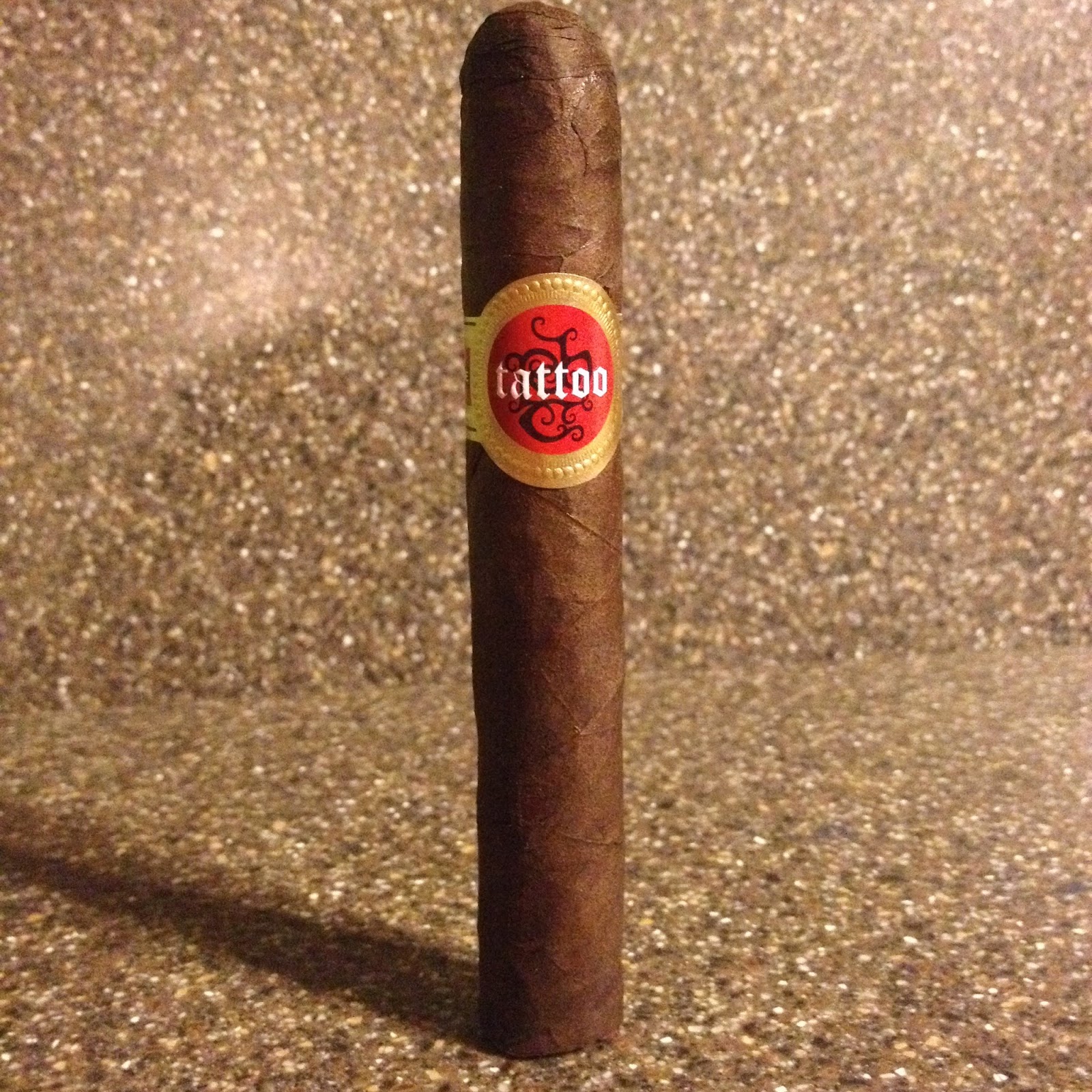