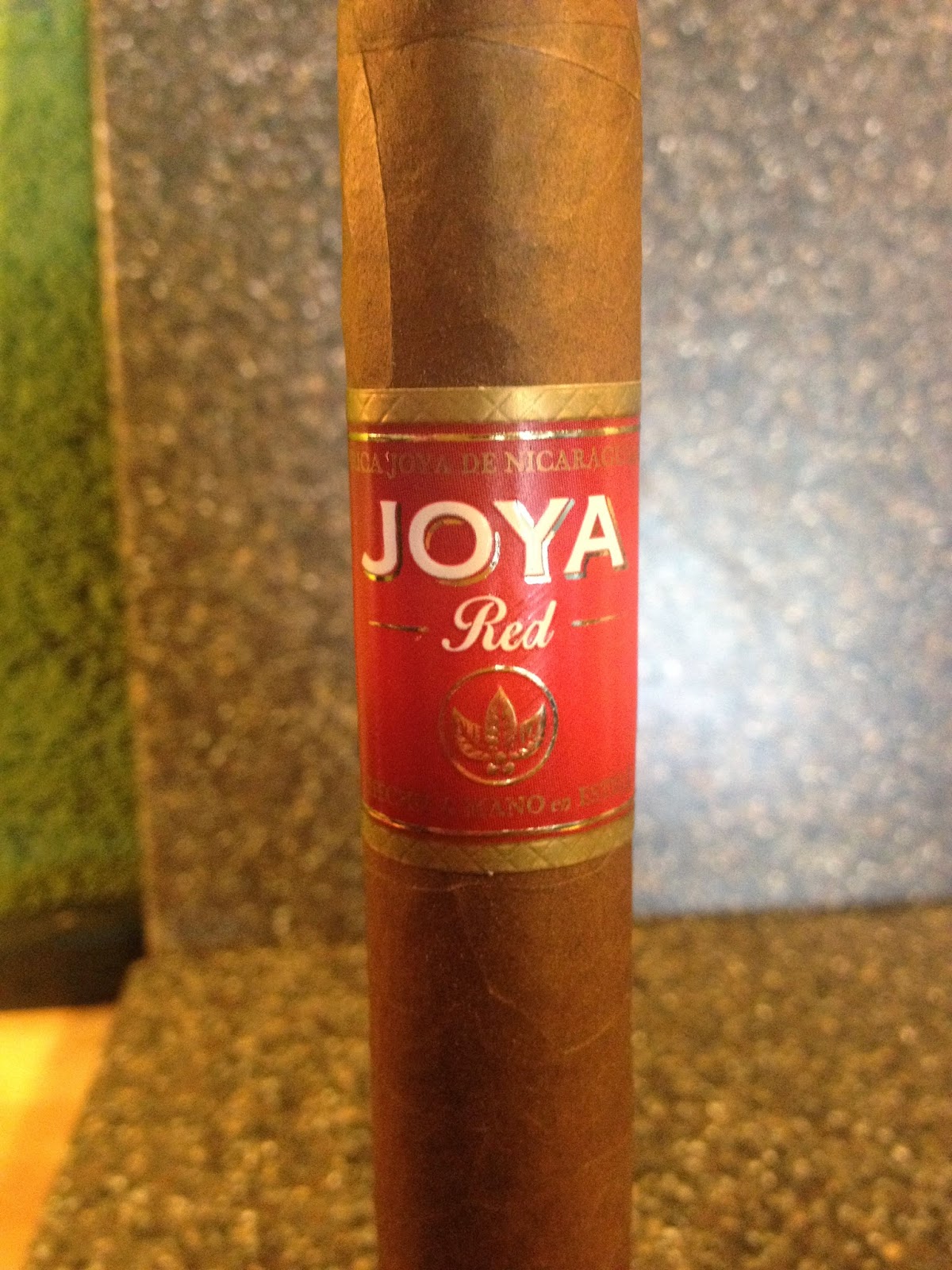 I had the pleasure of touring the Joya de Nicaragua facilities in April and upon entering and leaving the factory I met wonderful individuals and experienced a factory that was traditional and older, but also very comforting because of that. You could feel the history around you when there and you saw it in the building surfaces and on the people's faces as well. It is a factory that is surrounded by homes and it does not come off as a factory in an industrial area, but a factory that was building within a neighborhood. Picture Arsenal Stadium and Wrigley Field, and that is what this factory is like. While there we were given some samples to begin with and we were told that it was a cigar they were working on. Nothing else was said at the time about the cigar, but instead we smoked the unknown and shared our thoughts. It was a cigar that spoke to me upon lighting, and when I found out that it was the new project from the company, I was thrilled. That new project is called Joya Red, and it is the cigar the company is featuring at this year's trade show. It is a cigar that has the company returning to their roots you can say, but what is unique is that it is crafted from the new generation of Joya de Nicaragua, Juan Martinez. Today I look at the Joya Red and it is exciting to look at this cigar while it is being showcased at the IPCPR.

For this review I chose the Toro, I have smoked almost all of the sizes now, and all are really great, but I am going with this smoke because it is probably one of the most popular sizes on the market. It is your standard toro measuring 6" with a 52 ring gauge, and is made at Fábrica de Tabacos Joya de Nicaragua, S.A. It is a Nicaraguan puro and features a Nicaraguan Habano wrapper, Nicaraguan binder that is not disclosed and a filler blend of tobacco from Condega, Esteli and Jalapa. The Red features a lovely wrapper that is consistent in coloring and has very small veins present throughout. It has a light Colorado coloring and it comes off as an older cigar in appearance. The cap is placed perfectly on the cigar and this is a well rolled cigar. It makes me think of the work that Ruddy did in the factory while touring with Cigar Safari. Thea aroma on the wrapper is that of leather, cedar, tobacco and spices, and the foot is showing an aroma of cocoa, rich earth, spices and tobacco. There is a nice draw on the cigar and I light it up immediately. 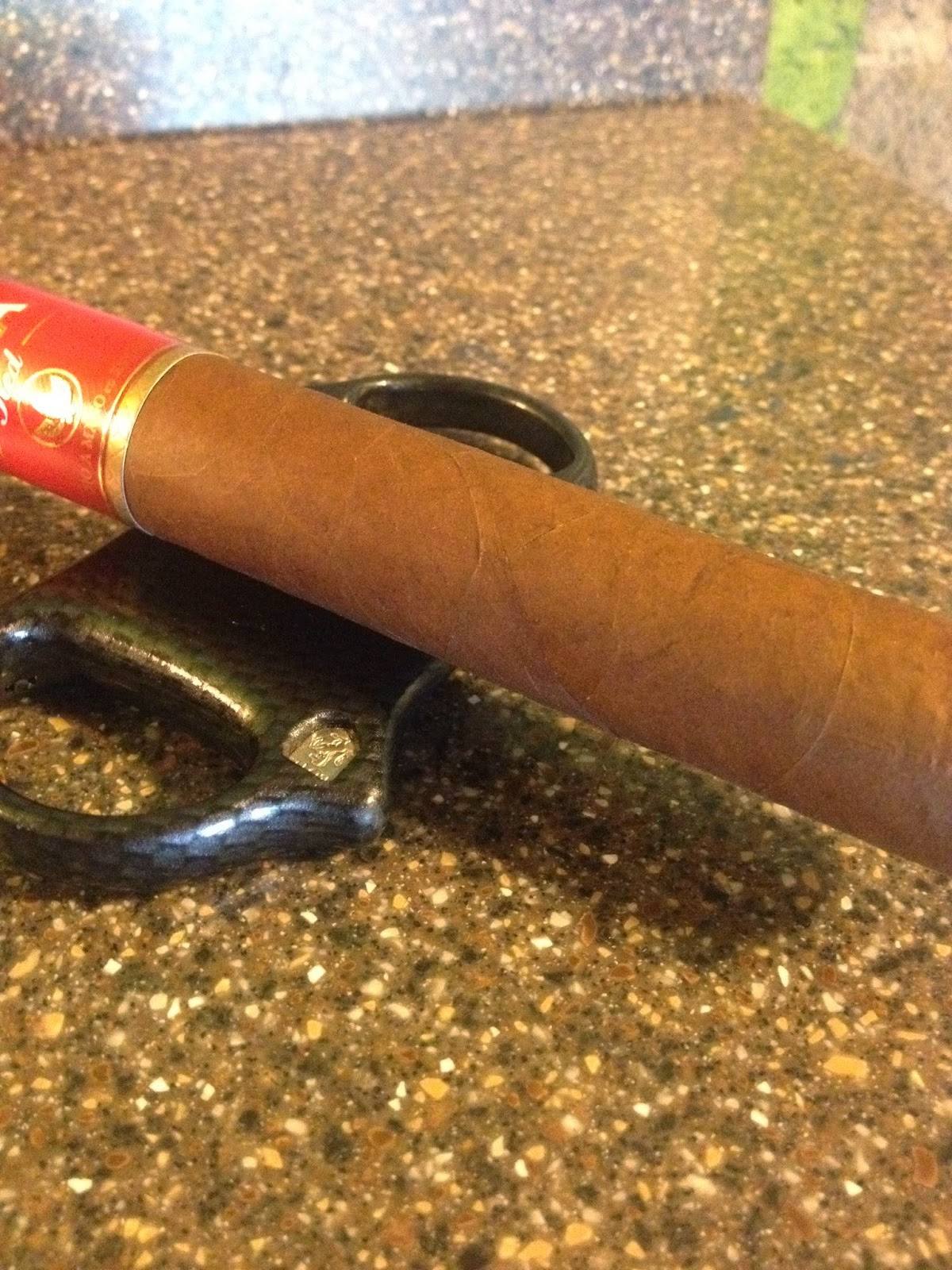 The cigar begins by showing some incredible flavors with an abundance of balance. There is a nice lemongrass and black pepper flavor profile present with the cigar and it has nice bit of nuts, toast and dry earth with that. I am getting some faint leather notes as well, and the finish is showing the lovely Nicaraguan tobacco qualities. As I said earlier, the cigar is very balanced the flavors are dead on and to my liking. I would say that the strength of the cigar is right at a medium level and the body is there as well. It is simply balanced and not overpowering in any way. The construction is perfect on the cigar and it is showing an even burn line with a nice light gray ash that is firm on the end. The cigar is constructed perfectly and it has a lovely draw that is producing a nice bit of smoke. What a start to this cigar! 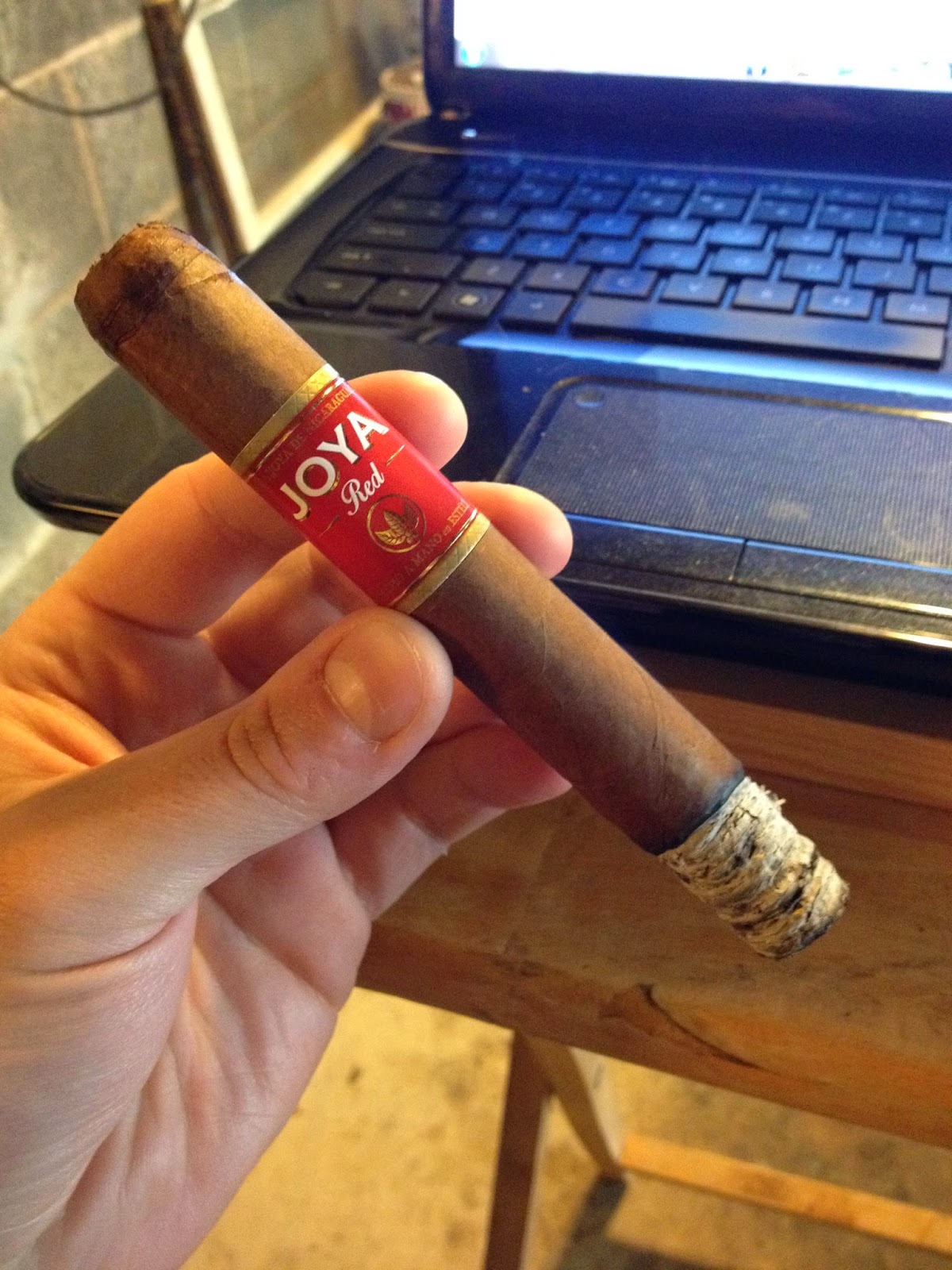 I am in the second third of the cigar now and it is producing a lot of those great flavors from the first third and more. There is a ground coffee flavor with the cigar and it is paired with some great pepper notes that are working well off one another. I am getting a strong lemongrass flavor present as well and it finishes by showing some nice toasty, nutty and dry earth flavors. It is really an enjoyable cigar in terms of flavors and it is definitely to my liking. The body and strength are right at medium and this is a cigar I could have in the morning, afternoon and evening all the time and never get bored or feel like I am missing something. Right now, this is possibly the best cigar Joya de Nicaragua has released, and I mean best ever. The construction is dead on and it is producing a razor sharp burn line wit that firm light gray ash on the end. The draw is cool and producing a nice bit of smoke, and I am loving this cigar! 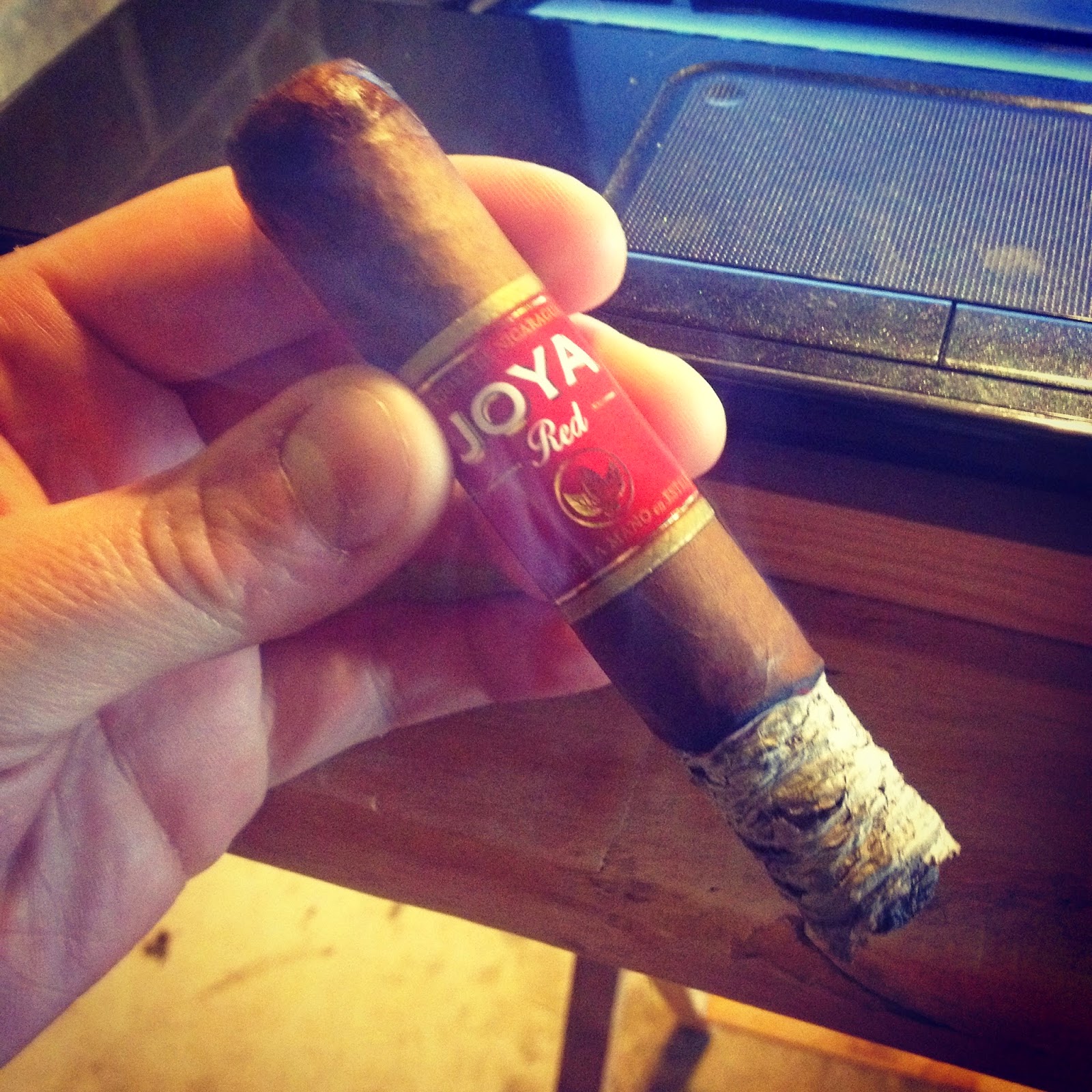 When I get into the final third of the cigar I find that the second third flavors continue to deliver and it is a complex cigar filled with so much that pops at different points. There are times when it is showing this incredible coffee flavor paired with cocoa and pepper, and then it makes a turn and begins to deliver some lemongrass notes along with those pepper and nutty flavors. Overall, it has a dryer flavor profile, with toast, leather, tobacco and dry earth present in the background, and this is a complex, balanced and well blended cigar. The strength level is smoking right at a medium level in this third and the body is there as well. As I have said from the beginning, it focuses on the tobacco flavors and the flavors are amazing! The construction remains perfect in the final third and it has a cool draw with a nice bit of smoke being produced throughout. The burn line is even and on the end is a light gray ash that is holding on firmly. The final draw is cool and more importantly flavorful. 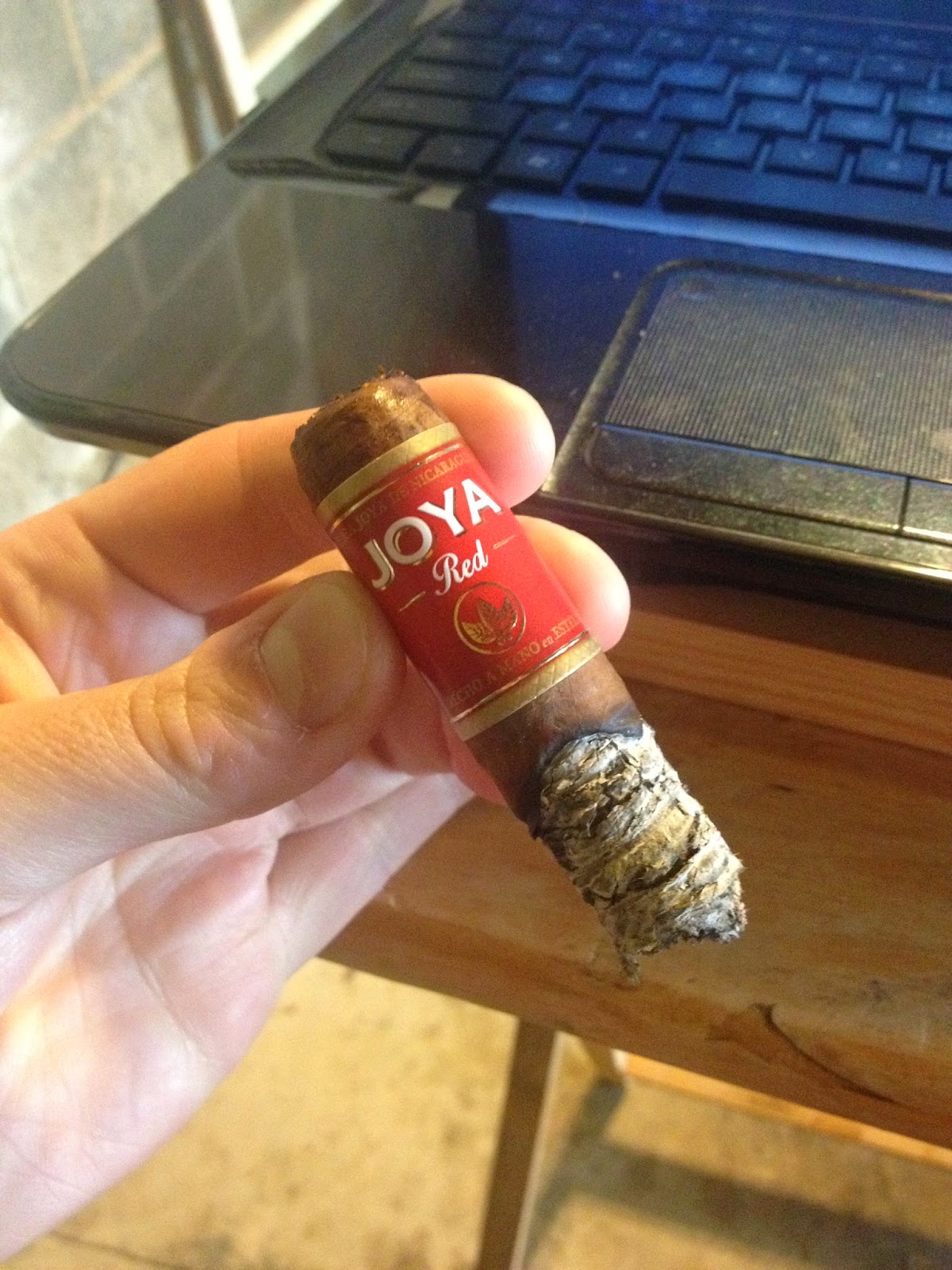 The Joya Red is a terrific new line from the company and I think their best release in a long time. Looking at their current portfolio, I believe it to be the best of the bunch. I am a huge fan of the Rosalones, but this is better than that. I think the CyB was a terrific release from the company, one that I loved and still do, but I believe this to be better. What I loved about the smoke was that it kept with what Joya de Nicaragua is and was a Nicaraguan puro. Everything about this cigar is Nicaraguan and that goes from where the tobacco is from, who harvested the tobacco, who worked with the tobacco, where the cigar was rolled and who rolled the cigar. It kept that tradition of the company alive and did so magnificently. What I also love about the cigar is that while it is very traditional in what it is, a flavorful cigar that is medium body and strength, it was blended in a modern way and made to reach out to the modern smoker. I first smoked this cigar in the conference room at the factory when we got there, a beautiful factory by the way, and when we were introduced to the cigar I loved it. I remember sitting across the table from Ben Lee of Stogie Review in the room and both of us loving it and telling them that. We were given a sample to take home with us and while I smoked it in the sick period and did not think it was as good as it was at the factory, it is definitely read now and an amazing cigar. This is truly a great cigar and one that I can not get enough of currently. I actually have not been smoking much of anything else, just the samples. This is being showcased at the 2020 IPCPR right now and if I could tell all the retailers there right now something, I would tell them to bring this cigar in. I am giving this a 94 rating and besides the fact that it will continue to do well for me, the company has really made a cigar that is incredible and done so while returning to what Joya de Nicaragua is all about. Do yourself a favor, pick one up and Rediscover Joya. 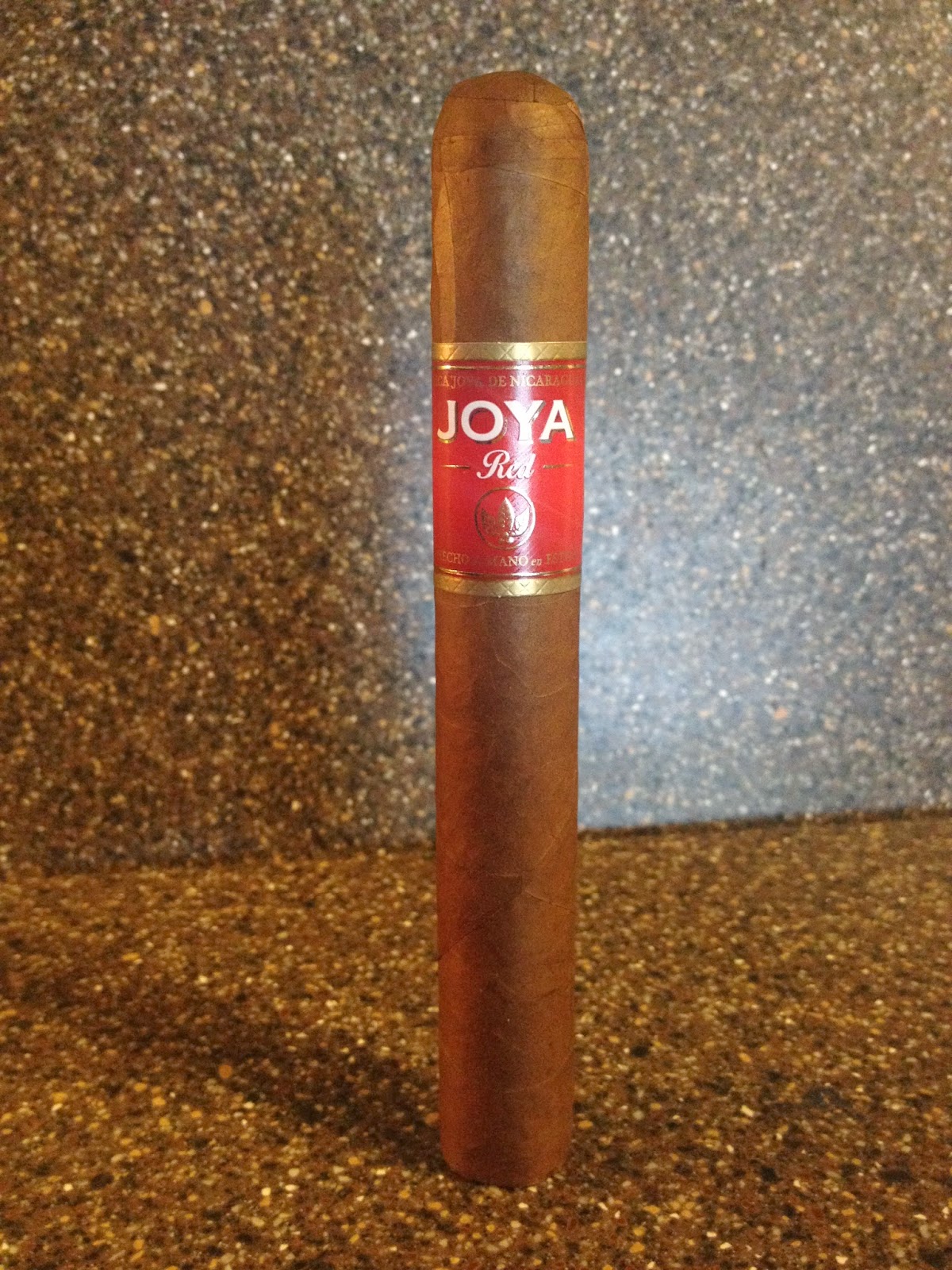