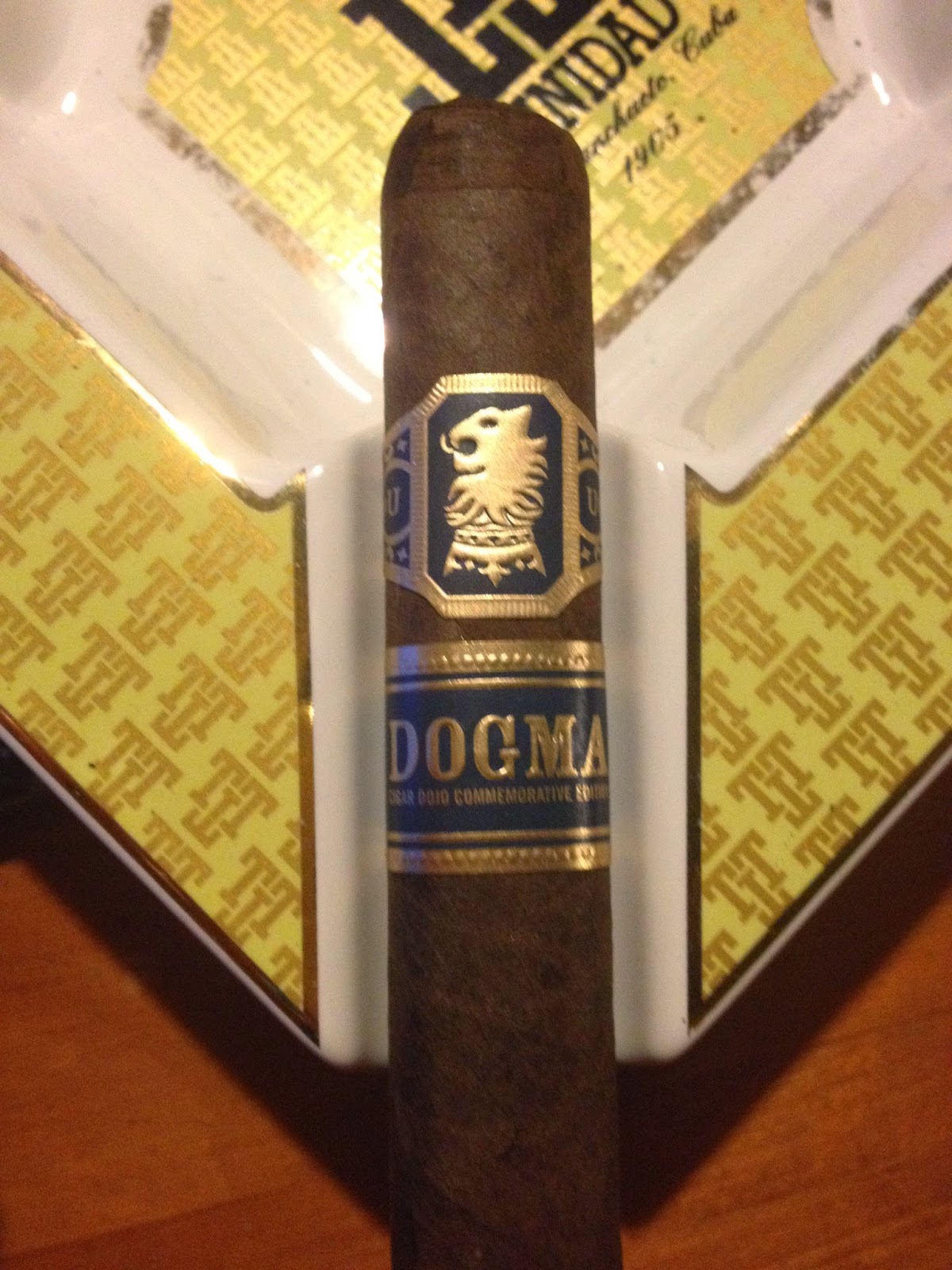 On March 24th Drew Estate announced the newest addition to the Undercrown line/brand. That cigar would also be celebrating the one-year anniversary of the online community, Cigar Dojo. Cigar Dojo is led by Master Sensei, and I have been fortunate enough to have some conversations with him since becoming a member of the Cigar Media Association. Sensei and all the guys at Cigar Dojo do an incredible job with their community and it is terrific to see them get a smoke in their honor. The cigar has been named Dogma and the name came was thought up by JD's dad, Baitfish. Dogma is a principle that is enacted by an authority as incontrovertibly true. Basically it is a law or fact and Drew and Sensei are throwing that law/fact down! Yes that is vague and hippie like, but that is what the Big Tuna is all about.


The Dogma is based off of the blend used for the Corona Viva, but it is tweaked slightly and then put into a 5" by 56 ring gauge box pressed parejo. The wrapper on the cigar is Mexican San Andreas and followed by a Connecticut Stalk-Cut Habano binder. The filler is a blend of Nicaraguan tobacco with some Brazilian Mata Fina present as well. The cigar possesses a wrapper that is very leather like in appearance and it is oily and silky at the same time. There are very few veins present and it is a firm cigar that is pressed lovely. The cigar has a lovely dark maduro coloring and it has an aroma of rich earth, cocoa and tobacco on the wrapper. The foot shows those dark chocolate notes with some damp earth and dark cherry notes and I am looking forward to smoking this baby. 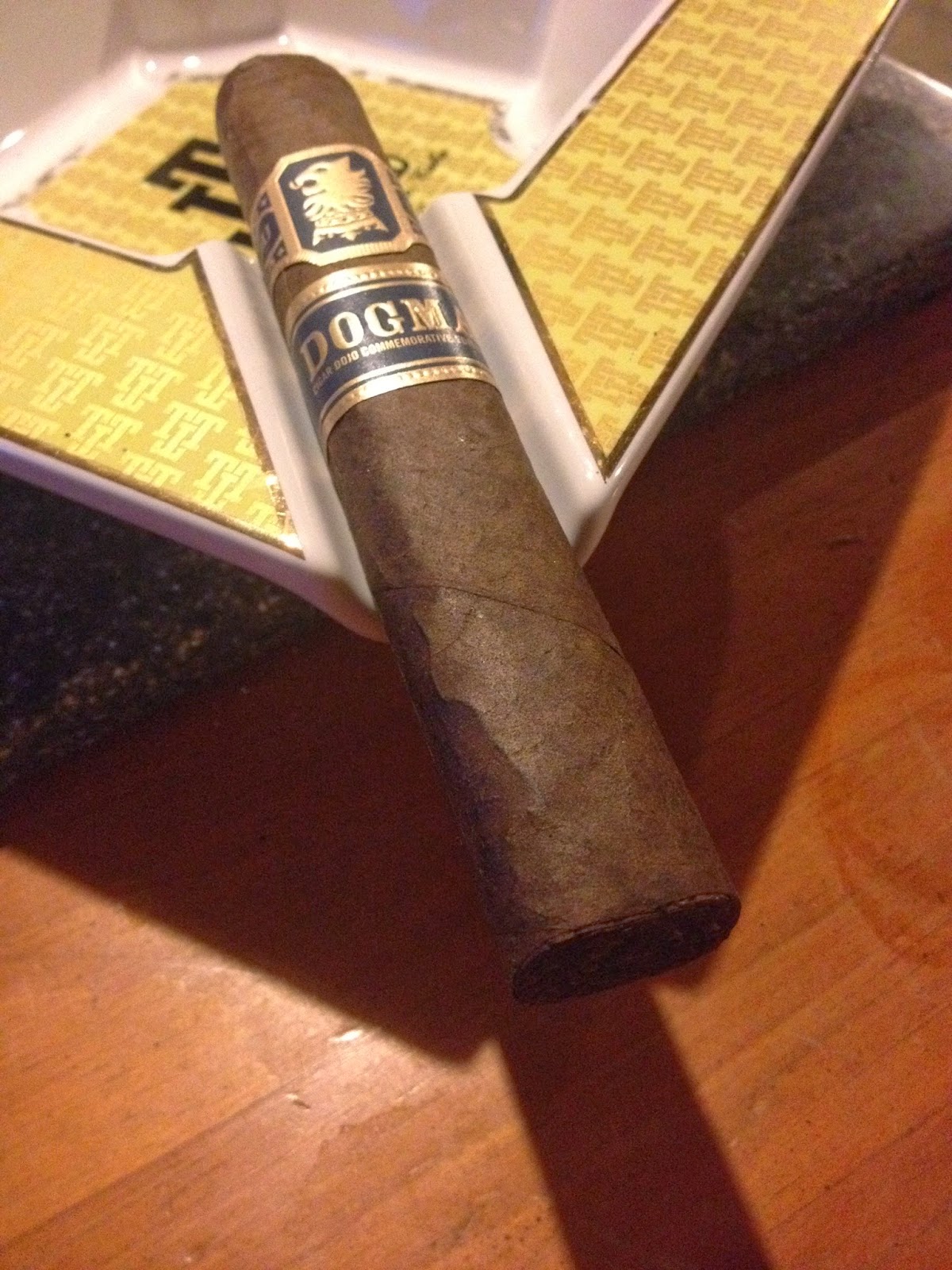 The first third begins by showing some incredibly sweet syrupy characteristics and it is rich and powerful in that sense. There are subtle hints of chocolate with sweet and refined molasses notes. I am picking up some fall like characteristics as well and it has this Grade A quality maple syrup flavor. There are some rich earthy notes present as well and it is a very enjoyable cigar. To me it is the sweetest and richest maduro I have had in some time and possibly ever. It has some balance to it and it is very unique and complex. The construction is fairly solid on the cigar as well and it is showing an even burn line with a very dark charcoal colored ash. The draw is easy and with it is an abundance of smoke. In my opinion the body of the cigar is at a medium level and I would say the strength is right there as well. This is no Undercrown I have had and I love the Sensei touch on the cigar. 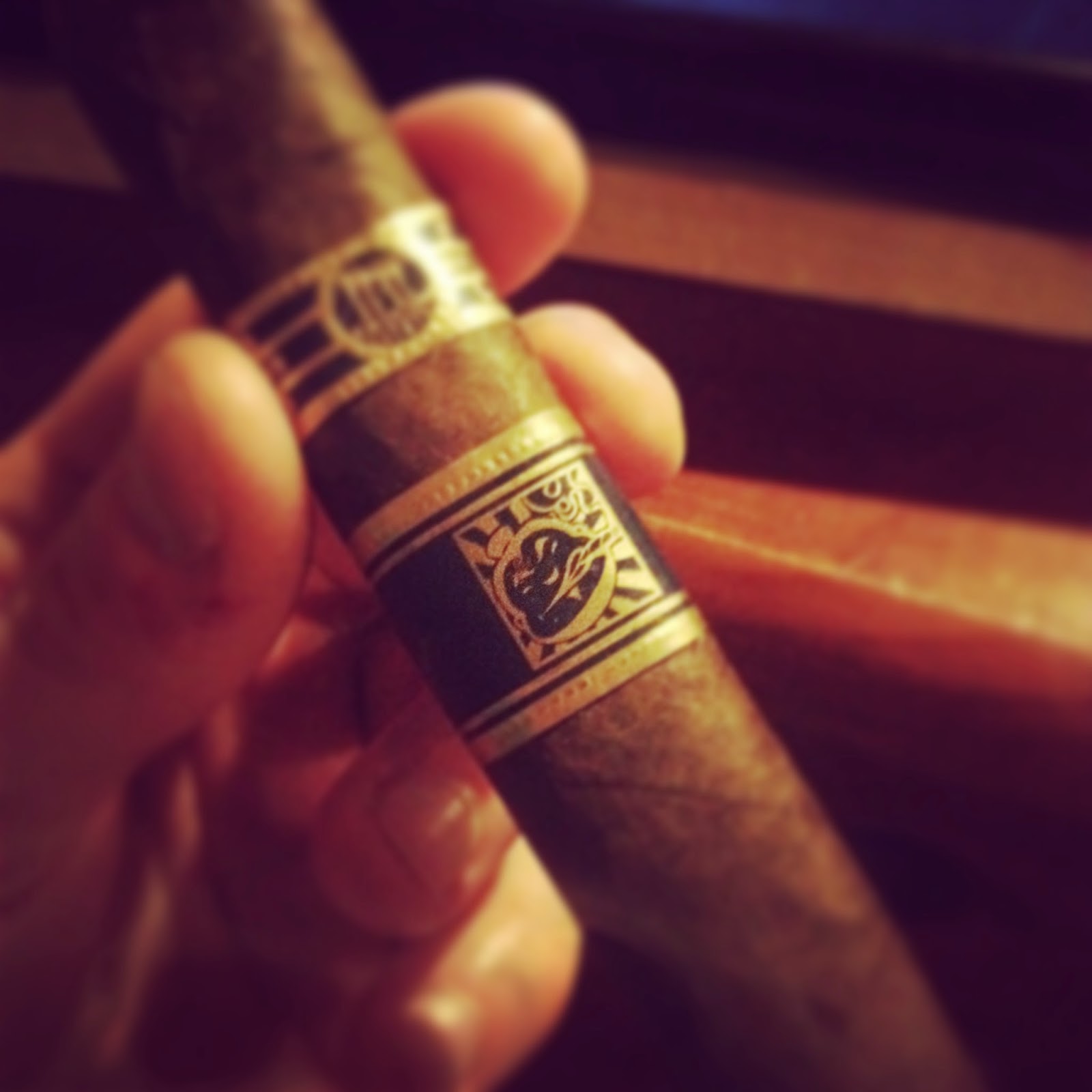 When I get into the second third of the cigar I find that it is showing some nice transitioning and while it still has that rich and sweet syrup flavor profile, it is being balanced out with some natural earth and dark coffee bean flavors. It is still a rich and filling maduro, but it is taken down a notch and becoming a little bit more natural if you ask me. It was not a sudden shift, you could definitely pick it up towards the end of the first third through the first part of the second third and I am really enjoying this smoke. The construction on the cigar is very similar to that of the first third and I believe with the wrapper being so oily that it is causing it to not burn as perfect as some. The cigar is producing a wonderful charcoal ash that is holding on firmly at the end and as usual there is a great amount of smoke being produced. I would still classify this smoke as being medium in body and the strength is right there as well.

I am in the final third of the cigar now and once again it is showing some transitioning and it is becoming a more natural maduro as it progresses. It is nowhere near as sweet and rich as it was when it first began, but has taken it down a couple notches and become a smoother cigar. I am getting some wonderful coffee and dark chocolate notes to the cigar and it has some damp wood qualities present as well. There are still some syrupy flavors that were present in the first and second third, but much softer now than before. In terms of body and strength the cigar is smoking at that same level which it was at before and it is at a solid medium level. The construction got a lot better in the final third and I found that it was producing a razor sharp burn line and it had a great charcoal ash with that which was holding on well. It produced tons of smoke all the way to the end and final draw was cool and filling. 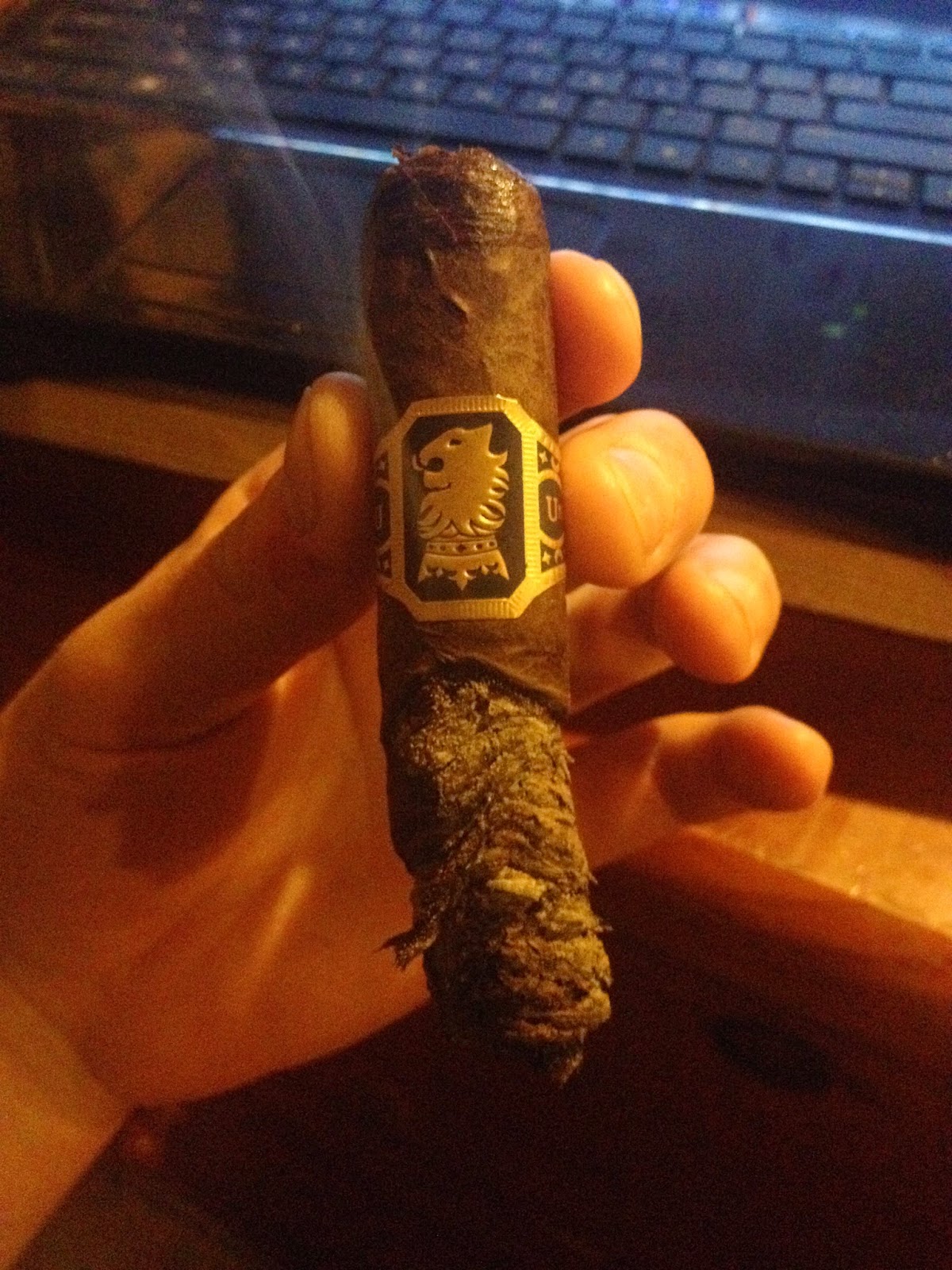 I really like the Dogma and when looking at the smokes and blends offered in the Undercrown line/brand I would say this is my second favorite after the Corona Viva. While I was not eager for the smoker in reading, the 56 ring gauge is a big size, the box pressed format was perfect for the smoke and made it terrific. The cigar really showed all the traits that you see with Drew Estate smokes in the Undercrown and Liga Privada lines/brands and it produced tons of smoke, an easy draw and an ash that was firm in holding on to the foot. The flavor profile was incredibly rich and while it started out very sweet and syrup like, it calmed down as it moved forward into the second and final third. This is probably the richest and sweetest Mexican San Andreas I have had and is a rich maduro. I think a lot of people will love this cigar and with the size and flavor profile it is a brilliant release. I am so glad for Master Sensei in teaming up with Drew Estate in creating the Undercrown Dogma for Cigar Dojo. The cigar is very enjoyable and a solid release from Drew Estate. These cigars will be available through Smoke Inn Cigars and I am giving this smoke an 89 rating. 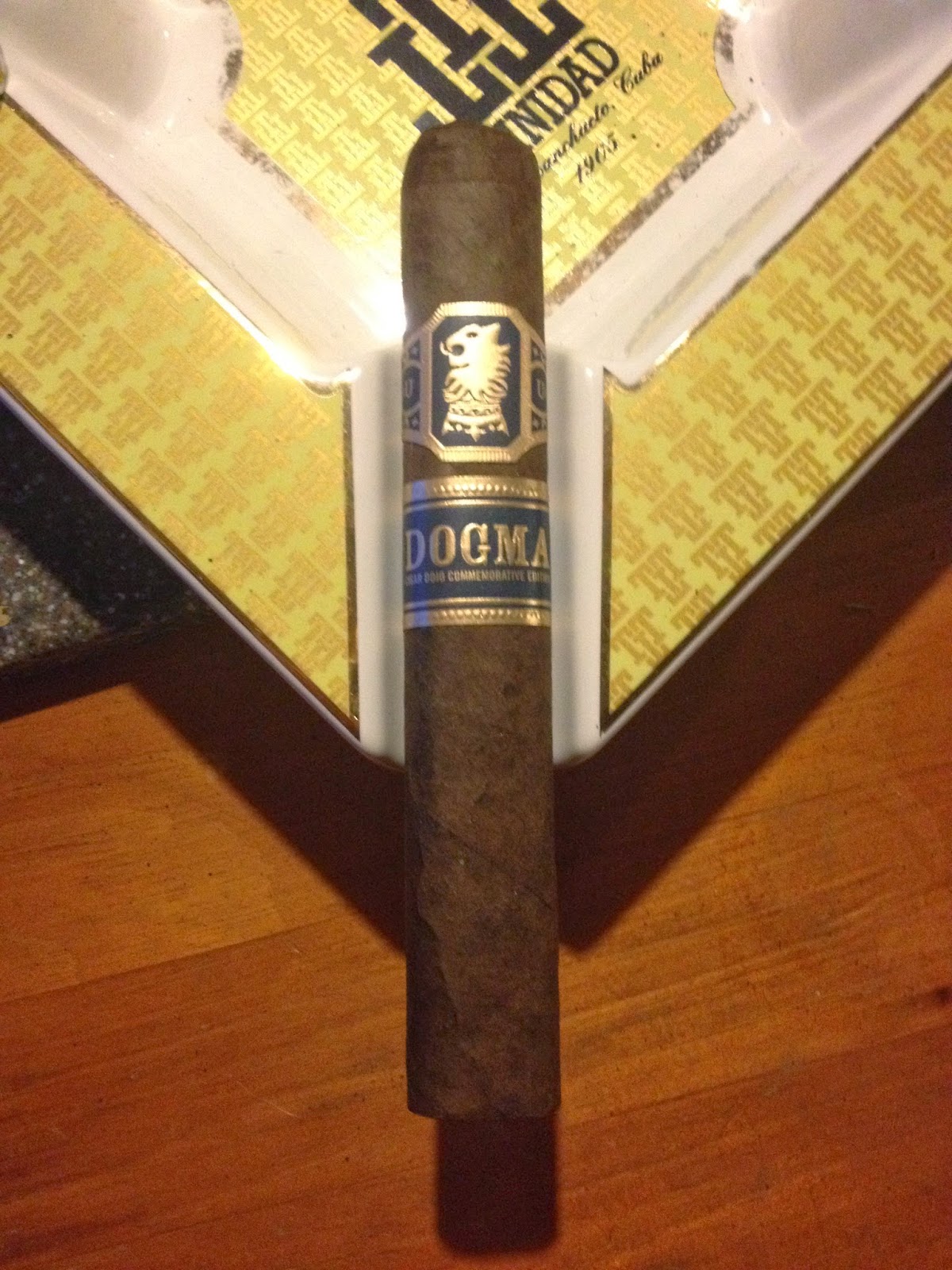