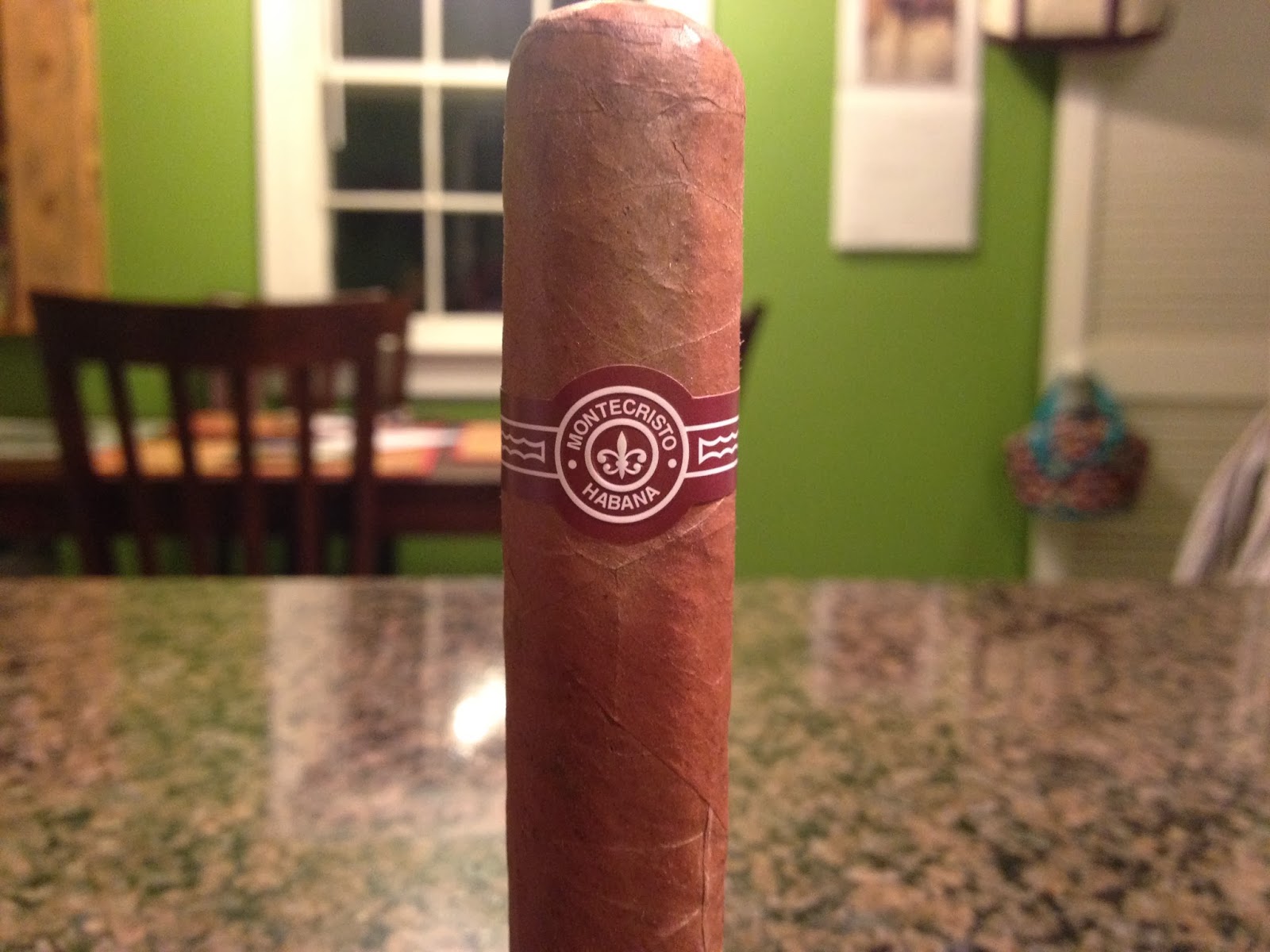 In 2004 Habanos S.A. announced that the Montecristo brand would be receiving a new vitola, and that the vitola would be called the Edmundo. It was the newest addition to the brand since they began releasing cigars Montecristos in tubos after the Revolution, and was in a format that was reaching out to the modern day smoker. What is funny to think about now, ten years later, is that when the cigar was released, a 52 ring gauge cigar was a large cigar. Two years later they made a similar cigar but short, the Petit Edmundo, and this last year they announced the Double Edmundo. The Montecristo brand is a brand that has grown dramatically under the Habanos S.A. portfolio, and it has been the most affordable of the two biggest brands under the Habanos S.A. portfolio. Today, roughly ten years later, I look at the Montecristo Edmundo and review the the cigar that really transformed the Montecristo brand. 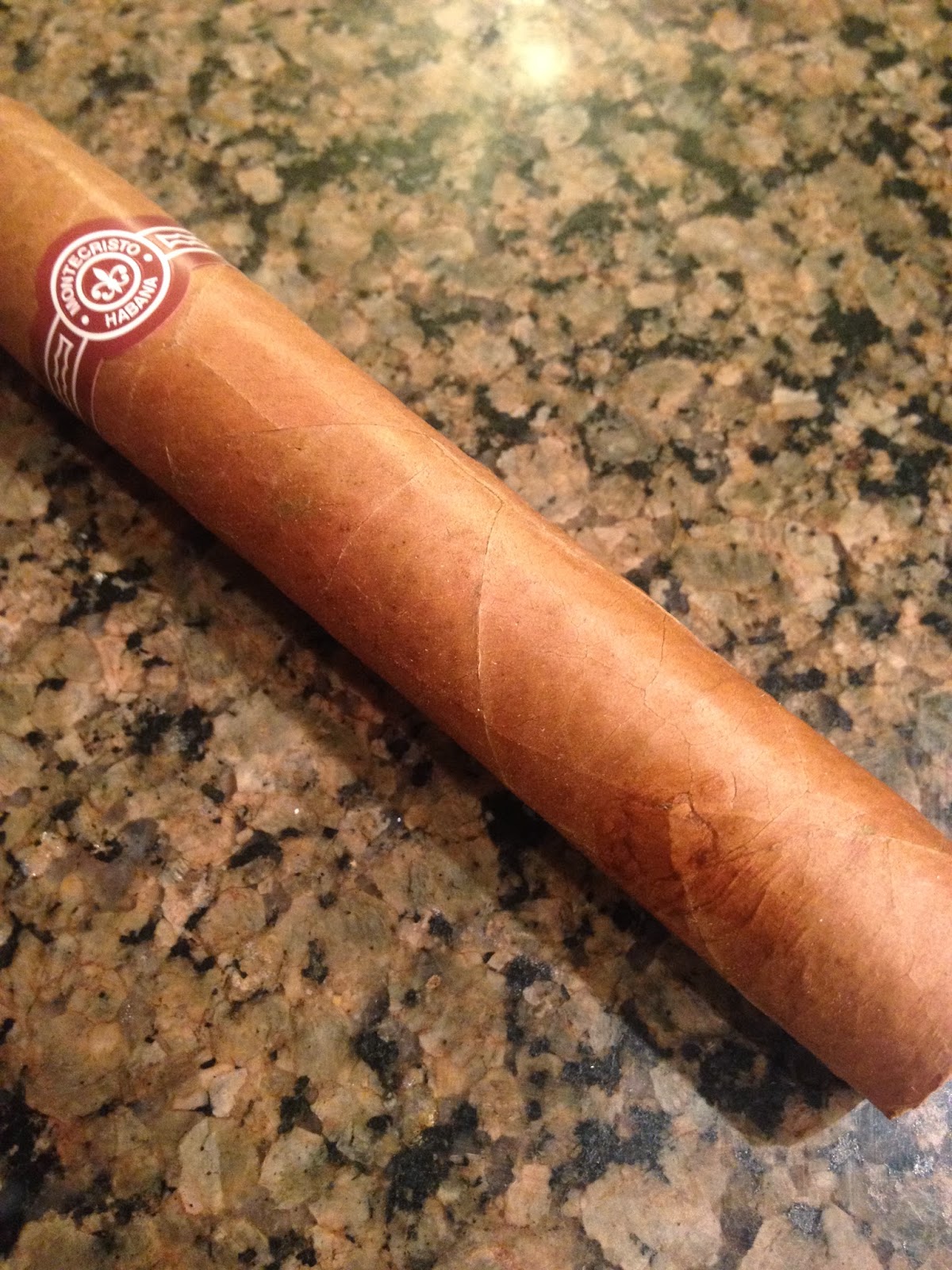 The Montecristo Edmundo is classified as a robusto vitola, and though it is slightly larger, I believe it is what Habanos S.A. believes to be the 21st century robusto. The cigar measures 5.3" or 135 mm, and has a ring gauge of 52. As to be expected, the cigar is made of entirely Cuban tobacco, and is tobacco from the Vuelta Abajo region. Production of these cigars is in the H. Upmann Factory, and the factory is located in Central Havana. The Edmundo utilizes a wrapper that is very light in coloring, and can come off as a Connecticut Shade to the untrained eye. The coloring is really a combination of Claro, Natural and Colorado, and it has a silky texture while utilizing some minor veins here and there. The cigar has a soft firmness to it, and the band really pops off the wrapper. I am getting an aroma of cedar, nuts, hay and tobacco, and there is that wonderful Habanos aroma present as well.

Lighting up the cigar I was greeted by those terrific Montecristo flavors. I was picking up some soft espresso qualities, bits of cream, nuts, nice cedar notes and some lovely tobacco flavors. Overall the cigar smokes like a cafe latte or cappuccino, and this is a cigar I typically begin my day with. The flavors are just smooth and easy, and I have no idea why Montecristo released the Open Series with cigars like this. The cigar has a body right at a solid medium level and I would say the strength is at a medium, maybe a little bit less. In my opinion, this is the softest of all the Montecristos I have had. The construction on the cigar is absolutely perfect and it is showing a nice burn line with a beautiful charcoal colored ash. There are somethings in life which are amazing and this cigar is one of those things. 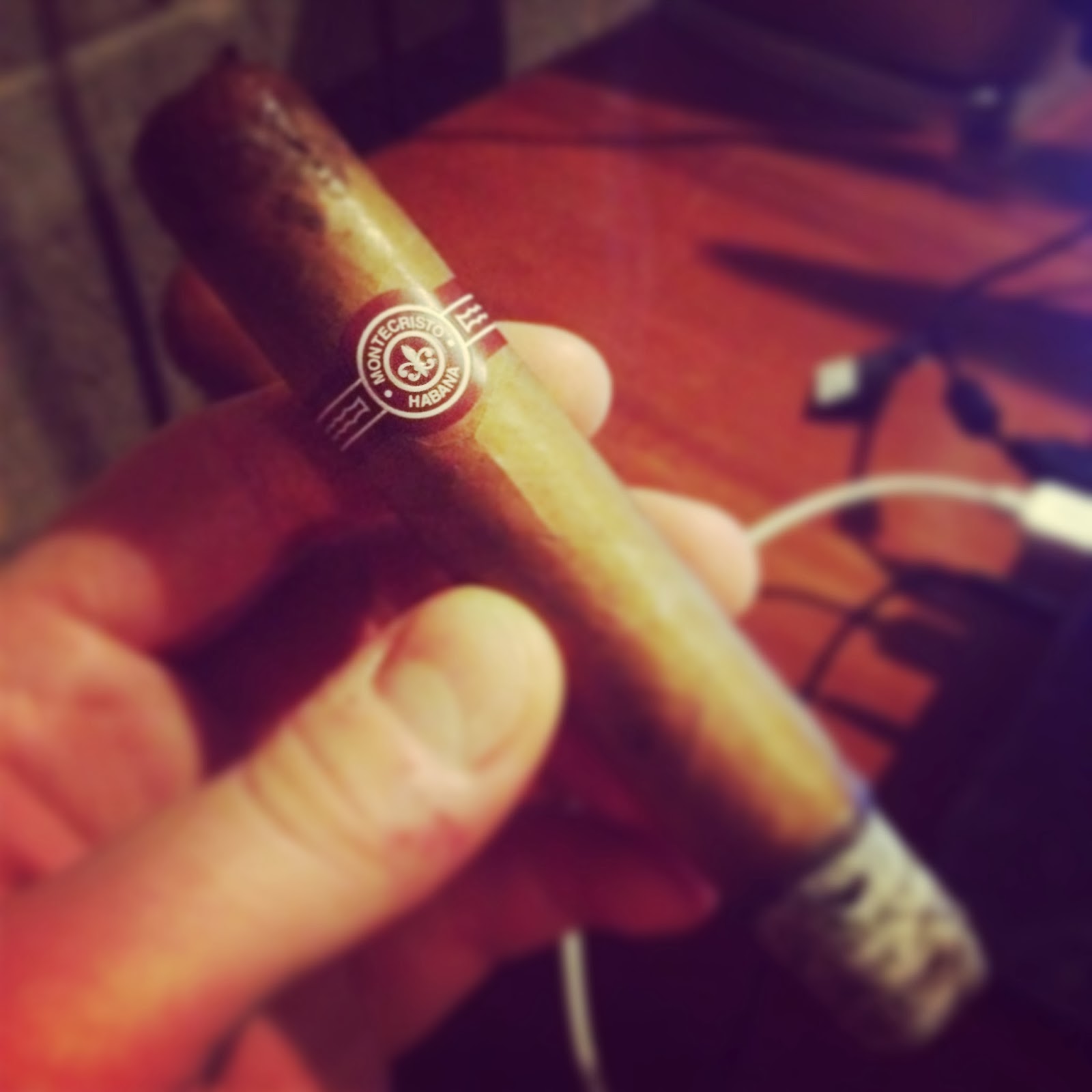 I am in the second third of the cigar now and the cigar is continuously deliver those terrific flavors. It is showing more cedar and tobacco notes in this third, and I am getting some nice Asian spice and cinnamon qualities as well. The cream and espresso notes remain present, even if softer, and this is a wonderful smoke. I have always loved the flavors coming off of Montes, and they are classic smokes if you ask me. The construction on the cigar in this third is absolutely terrific, and it has been since I lit it up. The draw has a perfect amount of resistance and I am getting a nice bit of smoke with each puff. I would say that the strength and body of the cigar are remaining just at that medium level and it is a perfect level for me to start the day with. I have already said it, but there is a reason the Montecristo brand is an absolute classic.

When I get into the final third I begin to experience a cigar that is showing lovely cinnamon, cream and coffee notes. It is like a fancy drink that still tastes like coffee from Starbucks, and this is why I consider this cigar a morning smoke. I am still picking up some cedar and nutty qualities to the cigar, and this is a smoke that I could smoke all day every day and be pleased. The flavors are not overwhelming, but showing those enjoyable Monte flavors that I love. The cigar smokes cool with every day, and it is producing a strength level around the medium point and a body there as well all the way to the end. The construction in the last third is nothing but perfect, and it has a razor sharp burn line with a nice firm charcoal ash. The last draw is cool and tasty, and I have to light up another one following the last bit because it was too good to not smoke again. 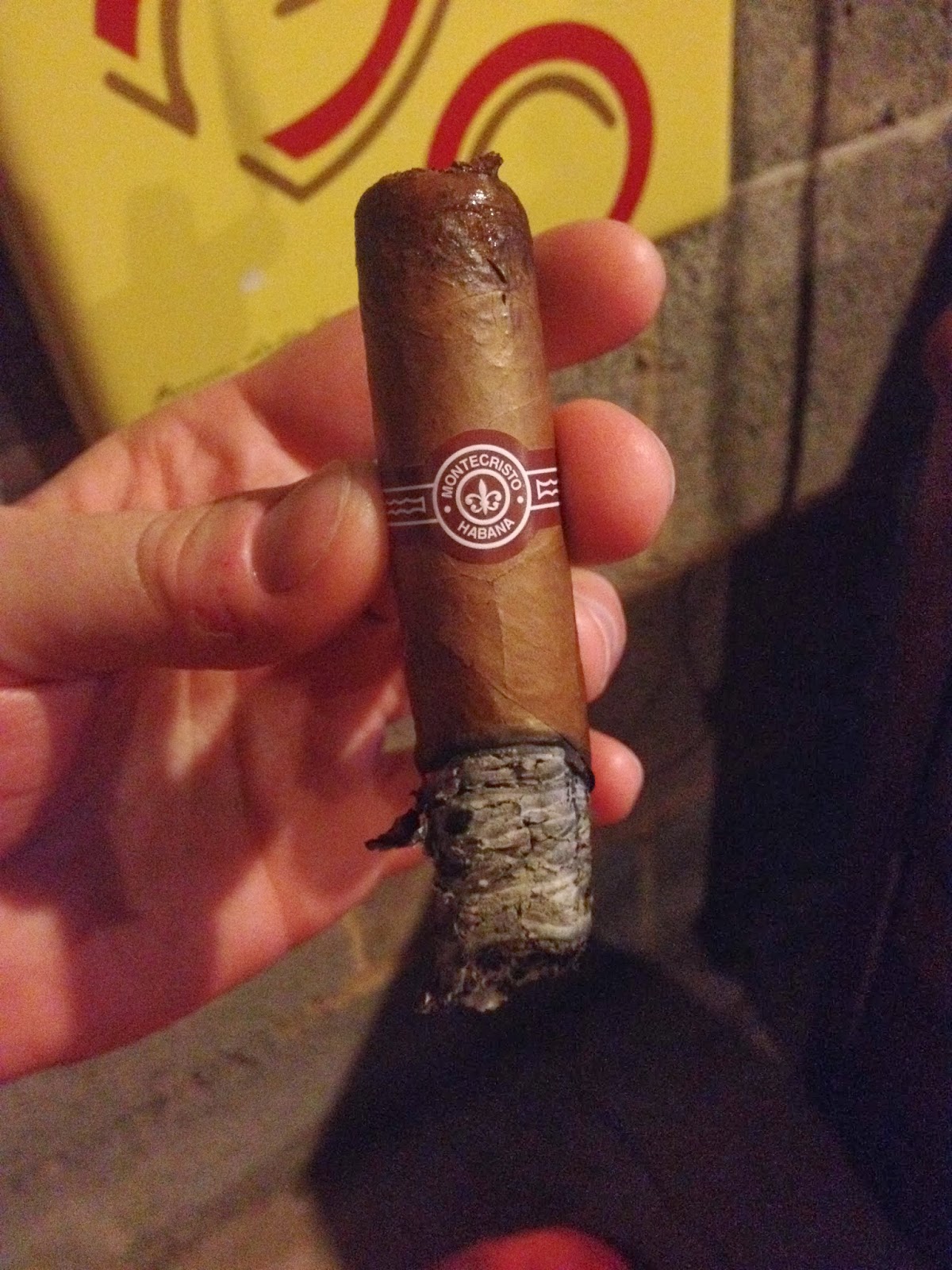 If you let me chose which Montecristo I am going to smoke, this will not be my first choice, but it is still a solid one at that. I prefer the Petit Edmundo which is filled with more body and flavors, but this is a great robusto nonetheless. The cigar showed amazing construction from beginning to end, and it had a lovely charcoal ash that held on throughout. The draw was cool from beginning to end and it had a flavor profile that showed some changes, but was more a core and very tasty offering. I know my brother Catfish is a big fan of these and I can see why with the cigars he prefers. This is the cigar I would hand out to friends who were fairly new smokers and what I had to offer was a wide selection of Montecristo smokes. This particular cigar was from 2017 and while the three years have been great to the cigar, I do think a couple more would help the cigar out tremendously. I am giving this cigar a solid 92 and look forward to enjoying the remainder of my box. 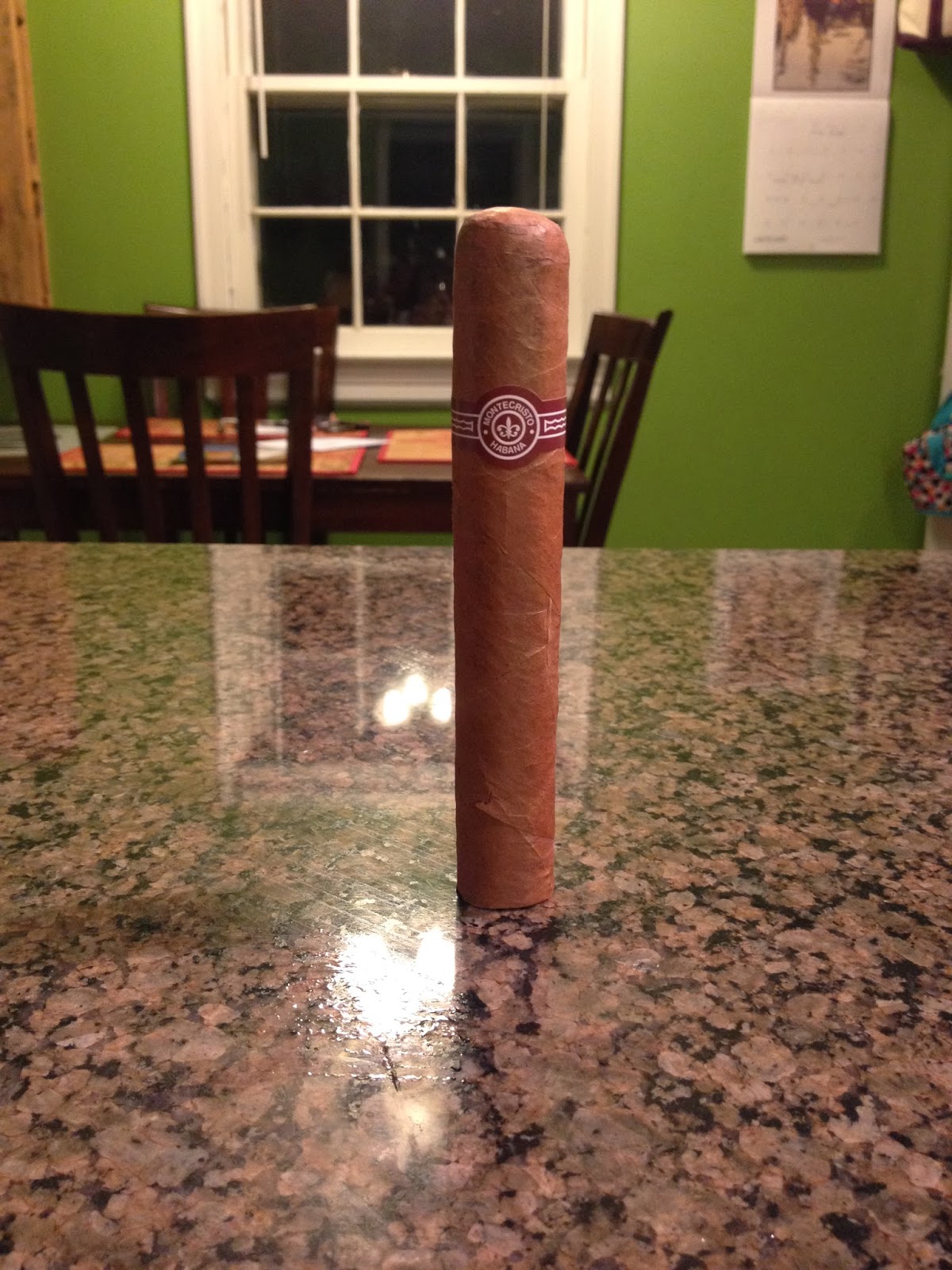