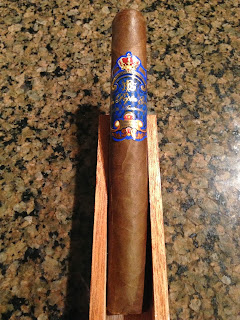 I knew this was a special cigar within the first five minutes of smoking it. I have lit this cigar up on several occasions, and it has been amazing each and every time. Don Pepin Garcia celebrated his tenth anniversary this year and with that anniversary he released this cigar. The cigar took on the name of the companies first cigar, the Don Pepin Garcia, and I believe that to be fitting. As an individual Jose Pepin Garcia has grabbed the attention of consumer, retailers and manufacturers from early on, and it was only till later that My Father Cigars emerged. This cigar pays tribute to all years the company has been in formation, and not just since the foundation of My Father Cigars. This is a magical release from the company and when looking back on all the great cigars they have made, this is up there with the 2007 limited release El Centurion. The cigar appears to be a classic special release blend on paper, composed of Pelo de Oro tobacco with an Ecuadorian Habano Seed wrapper, but when you smoke it it is so much more. The cigar was available in only one size, a 6.5" by 52 ring gauge toro, and each cigar came in its own individual coffin. The cigar showed flavors of stone fruit, cocoa, spices, tobacco, wood and leather throughout, and it was a cigar that was not overwhelming in terms of body or strength, but very balanced. From beginning to end the cigar showed tons of depth with transitioning, and was a very complex cigar. This is easily the best cigar My Father Cigars has released and the best cigar released this year.

I know some might say that of course I am giving this cigar the #1 rating, it was their tenth anniversary this year, but it is a release like no other. Overall My Father Cigars did not focus this year on a lot of new lines or anything like that, but instead paid tribute to the companies history. El Centurion is a remake of their once limited edition with the same name, and this cigar pays tribute to the line that started the company off. This is a company that could have released four new lines and go big, but instead they focused on one incredible limited edition, a cigar that people would speak about for years to come. I know I still have a handful of coffins in my humidor that I do not plan on touching, and if you were wise you would hold on to as many as possible as well. The My Father Cigars company is a company that produces a lot of great cigars for many companies, and those companies get a lot of fame for those smokes, but this year the fame falls on the Garcia Family and the Garcia Family alone. Congratulations My Father Cigars, this is truly a special cigar.