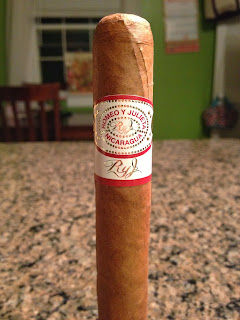 When I began smoking cigars years back I began much differently than a lot of smokers and did not focus on a few cigars here and there. I reached out to everything out there and began testing my palate early on. Of course I did not appreciate all those cigars at the time as I would now, but I was smoking a lot of stuff. Because of my diversity in cigar smoking, I did not spend a lot of time smoking the classic Montecristo and Romeo Y Julieta cigars, so the Romeo Y Julieta brand is a brand that I have not touched that often. I would say the most number of Romeo Y Julieta cigars I have had have been the ROMEO by Romeo Y Julieta, so I am really smoking Altadis USA's modern offerings of the brand. I will say that I do not smoke the Habanos S.A. offering of Romeo Y Julieta though, and the reason for that is that I do not care for their version of the brand. But anyways, the two are separate and we are talking about the latest release from Altadis USA. This is something very new and unique for them, and that release is the RyJ.

The RyJ is the first Nicaraguan puro for Romo Y Julieta, and features tobacco from all over one country. The wrapper is a secret leaf that is grown only for this cigar, and there are two binder leaves from Esteli and Jalapa. The filler blend is composed of aged tobacco, all from 2010, and is from Esteli, Jalapa and La Mia. La Mia is located in Jalapa by the way, and is considered one of the best tobacco areas in Nicaragua; it is compared to the Vuelta Abajo region of Cuba. For this review I was given the Toro offering, and the cigar measures 6" with a 52 ring gauge. The cigar possesses an aroma that is very Cuban. I would not say it has an aroma of Cuban Romeo, but it is an aroma that is more Cuban than Nicaraguan in my opinion. I am picking up nice dried tobacco notes, and I am getting some old wood, leather and spice qualities. There is an earthy quality present, but not over the top. To me the aroma is an old school cigar aroma, and that is why I say it is Cubanesque. The appearance of the cigar is lovely. It has a light Colorado wrapper that is showing that great light red clay coloring. The texture is fairly smooth and silky and while there are some larger veins throughout, it is mostly smaller veins. The cap is solidly placed and it is a well constructed cigar. 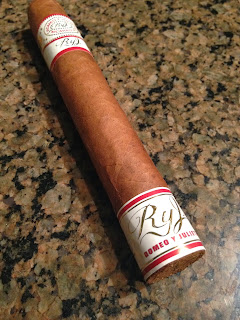 The first third opens up by showing those Nicaraguan qualities in a dryer format, not very rich. I am getting a lot of seasoned wood, bits of hay, notes of leather, aged tobacco and a nice bit of spices. I am getting some pepper notes throughout and it is a nice base. There are some very subtle notes of earth and cocoa powder, but nothing major. It is a unique smoke because even though it is a Nicaraguan puro, it shows a lot of qualities that you get with Dominican and Cuban cigars. I don't want to compare it to a cigar, but it is almost their version of a Davidoff Nicaragua. The construction is top notch and I am getting a razor sharp burn line with a nice charcoal ash on the end. The ash is holding on firmly and it will not budget. With a lot of smoke the draw is cool and I would say this cigar is smoking at a medium full level in terms of strength and body.

I am in the second third of the cigar now and the spice notes are on the rise. The black pepper notes are still present, but I am getting some red pepper flakes along with that. There is a new herbal and grassy flavor present as well, and it is pairing with the wood and hay notes from before quite well. The finish is slightly earthy and it has some tobacco notes along with that. I could say that it is the strongest non-Cuban Romeo I have had, and it is a solid smoke for today's market. The construction is still stellar, as I would expect, and it has a razor sharp burn line with that firm charcoal ash on the end. The cigar does produce a lot of smoke and it is a great medium full body and strength cigar. To me the cigar is very Cubanesque and it is a nice way of Altadis making a Romeo that can go alongside a Cuban Romeo. 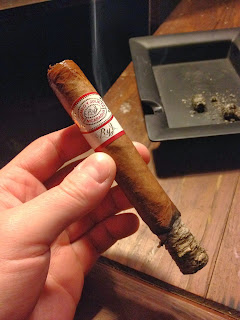 When I get into the final third I see a combination of the first and second third and it has a nice bit of dried spice and sweetness present. There is a nice bit of cocoa flavors presenting themselves in this third and it is accompanied by red and black pepper notes. I am getting that herbal, grassy and hay flavor after that, and it has a finish of oak and aged tobacco. The finish is very smooth and while dry is not harsh. I would classify the final third just below the medium full level in terms of body and even in strength as well. I found that the final third was the best of the two thirds, and it was because of this third that a smoker would grab another one afterwards to enjoy. It is not overly complex, but a solid cigar that will reach out to its market well. The construction was stellar from beginning to end and the final draw was cool with a nice even burn line and solid charcoal ash holding on well.

Overall the RyJ is a solid offering. I believe it does a good job of capturing the Nicaraguan puro flavor profiles, but it does not get dragged into the category of tasting like every other Nicaraguan puro. To me the cigar showed some Cuban and Dominican qualities with that, and that comes from the blend and the blenders. The blenders for this cigar are old school cigar blenders, and they are blending a Nicaraguan puro with many years of experience outside of Nicaragua. The cigar had complexity, but it was not overly complex and showing a lot of transitioning from third to third. I believe this cigar will do well in the market that it is aimed for, and it will get a lot of those older and newer cigar smokers who have been smoking Romeo, Montecristo and other brands along those lines. The construction was nothing but spectacular throughout and overall there is nothing for me to really complain about with this cigar. I am giving this a solid 89, and I do think that age will really improve these sticks. After smoking through my samples I believe that age will help these, but I do not see many guys aging these. 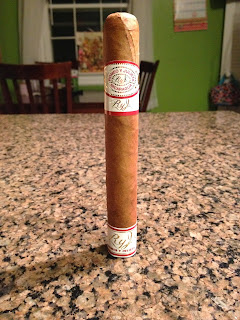 * cigars for this assessment were provided to me by Altadis USA for review.