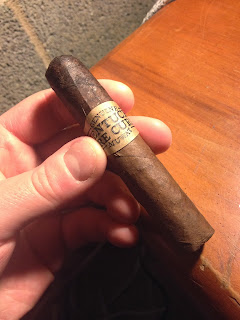 The cigar industry has always had individuals willing to use tobacco that has never been used in premium cigars before. We have seen the use of tobacco from Greece, Italy and other countries make it into blends of premium cigars, and we have enjoyed what the tobacco has to offer. Well, we sometimes enjoy the tobacco, other times we can't stand it. This year we saw the resurrection a process done to tobacco to create a unique experience while smoking. This process is fire curing tobacco, and it is a process that adds a smoky flavor experience when smoking the tobacco, and plays a significant factor in the flavors produced. I always think of mesquite barbecue when I come across the tobacco, and I really think it is something you like or don't care for. Earlier this year Drew Estate announced that they would be releasing line extension to the MUWAT line, and it would be called the MUWAT Kentucky Fired Cured. Since that announcement we have seen two other companies use the tobacco, but today we are going to focus on the company that first announced the use of it. With that being said, let us look at the MUWAT Kentucky Fire Cured Chunky.

When it comes to the blend of tobacco for the KFC, I know very little. I have had Drew Estate employees tell me that it features the most amount of fire cured tobacco in a cigar that was released this year, and is finished with a fired cured leaf on the wrapper. There are two wrappers on the cigar though. The foot portion is Mexican San Adres, but the head is actually fire cured tobacco. I know it does utilize fire cured tobacco from Kentucky and Virginia, but other than that I have no idea. What the company has said about the cigar comes from Nicholas Melillo, "Chief of Broadleaf," and it is this. First off, Kentucky Fire Cured is from a stalk-cut tobacco. The initial firing of KFC is done at low heat between 100 F to 115 F degrees and maintained until the color reaches solid brown. Once color is set temperatures increase to 120F- 130F to completely cure down the midrib of the leaf and darken. Once the midrib is dried the temperature will be reduced and the smoke maximized with saw dust to finish the leaf. 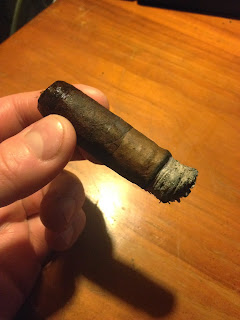 The cigar features two wrappers, and for 75% of the cigar it has that dark Colorado coloring before turning into a maduro coloring. There is some tooth present in the later leaf, but in the first leaf it has some solid veins and is slightly rough to touch. In a lot of ways it reminds me of the Joya Cabinetta. The cigar has a nice firmness and everything about the cigar screams rustic and country like. This is the third fire-cured focus cigar I have had this year, and like all of them there is that signature aroma. There is a great aroma of mesquite barbecue present with the cigar and it has a nice bit of rich earth and manure present as well. It is a pretty potent aroma, and somewhat overpowering, but if you dig that aroma then you will love it. For this review I chose the Chunky, and the cigar measures 4" with a 46 ring gauge. Like the other line in the MUWAT brand, the cigar is made at Joya's factory.

The first half begins by showing some great mesquite barbecue flavors, and there is some smoked meat/jerky flavors with that. There are some woody notes present with that, and it has a nice bit of peppery spice and leather on the finish. The flavors are definitely present, and you can get all the fire cured tobacco, but it is very smooth and tasty. The body of the cigar is at a medium to medium full level for me, which I love, but the strength is softer than that. I would say the strength is a little bit below medium and it is a nice smoking experience. Usually body and strength go hand in hand, but this is a cigar where they really don't. The construction on the cigar is perfect and it has a nice burn line with a solid charcoal ash along that, and it is a smooth draw. For a small cigar the draw is cool and flavorful, and that is what you want with a cigar of this size. 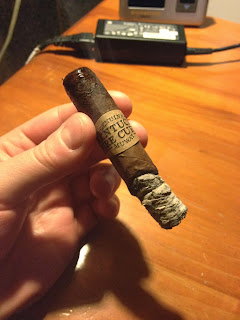 In the second half of the cigar it loses some of those powerful mesquite barbecue flavors, but it still continues to show those meaty flavors that have been present throughout. There is a rise in the earthy notes, and it has some coffee beans present with that. I am still getting some soft barbecue notes, but nothing like the first half. There is this unique flavor that is almost sweet and minty as well, but I can't pinpoint it exactly. The spice and pepper notes are softer as well and it is very enjoyable. The body has lessened some, closer to medium now, and the strength is at a medium level now as well. It is a complex cigar in that sense because there is a lot there, but you have to work through some of those fire cured flavors which are powerful. The construction is perfect with the cigar and it has a razor sharp burn line and a solid charcoal ash holding on with that. The final draw to the cigar is cool, producing a lot of smoke and tasty, and I can't help myself but light up another one directly afterwards.

Looking back on the fire cured tobacco cigars that have been released this year, and I have smoked them all, this is my second favorite. I felt this cigar showed the most of the fire cured tobacco, but I do not think it was the best blend. There is a nice bit of complexity with this smoke though, and the wrapper change to the cigar is very entertaining. I heard a friend say this is almost an "infused cigar," and he is absolutely correct. There is something about the fire cured tobacco which changes the cigar in some ways and it is meant to be the star of the show. I have yet to smoke the MUWAT KFC in another vitola offering, but I imagine I will like this size the most. The construction on the cigar was terrific from beginning to end and it smoked very cool being a small smoke. My overall opinion on fire cured tobacco is that I love the aroma of the cigar, but when smoking it disappoints. I feel that it is a cool addition to the cigar market, but I do not think a lot of manufacturers will be branching out with this type of tobacco. For some reason I can see Rocky using it, but I won't get into that. I think the fire cured tobacco attracted a lot of people, but it has not been as successful as the hype. I am giving this cigar an 89 and would tell guys to try them out to see what they think. Some guys may love the smoke, but I know some guys who will not care for it. 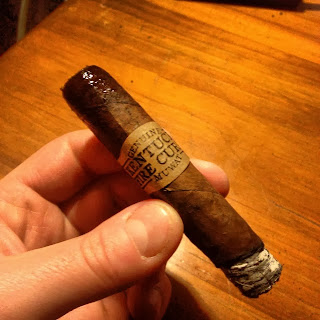