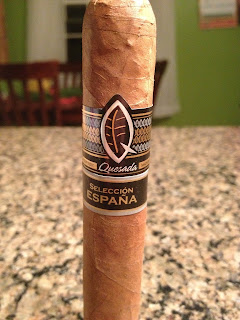 If there was a place that I could live that would give me access to cigars produced for Europe and the United States I would live there. You might be thinking that is because of the cigars coming out of Cuba, and you are right, but it also has to do with the cigars that are being made by manufacturers in Central America and the Caribbean for the European market. There are a handful of cigars that have and are being made for the European market that are not Cuban, and they are cigars that I love. We are seeing more and more manufacturers produce cigars for the European market, and some of those cigars are slowly finding their ways into retailers in this country. One of these cigars is made by the Dominican Republic based company Quesada Cigars, and is a cigar that has received a lot of pros on the web.

The cigar is called Quesada Selección España, and the cigar was made for Spain before being offered in the United States. European nations are more and more seeking out manufacturers outside of Cuba to make cigars for their market, and this is one of the many cigars. The story with this smoke is that samples of the cigars were handed out at the ProCigar Festival in early 2017 and they were a huge success. Retailers across our great nation demanded them, and after that the company decided to release the cigars in limited but regular production quantities to the us. I have never been able to get my hands on them, but recently I was able to score some with a great amount of joy. 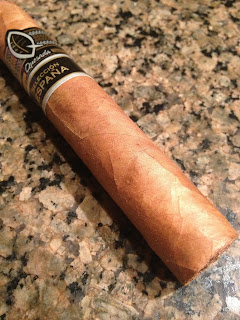 The blend is very unique and diverse like a good number of cigars by Quesada. The filler is a blend of Dominican, Nicaraguan and Broadleaf tobacco from Connecticut. The binder is Dominican, and the wrapper is Arapiraca from Ecuador. We more often than not see Arapiraca being used from Brazil, but not today! The Robusto vitola is a little bit bigger than your standard robusto, especially for Europe, and measures 5" with a 52 ring gauge. The cigar features a beautiful cap and construction, and it has a wonderful light Colorado wrapper that is silky with some small veins present. The cigar is fairly firm to touch and it has an aroma of grass, cocoa, leather, cedar and spices at the foot. The wrapper is showing some similar aromas, and I am getting some nutty notes there as well.

Lighting up the cigar I am greeted by a variety of flavors. It is very Cuban but Dominican at the same time. I am picking up some definite cocoa and tobacco notes, and it is accompanied by some leather and hay qualities. There are some spice notes present, along with some wood, and there is a lemongrass finish to the cigar. To me it is like a blend between a Cuban Cohiba and Bolivar, but it has more depth overall. I am getting a perfect burn line to the cigar, and it has an ash that is very light in coloring and holding on firmly to the cigar. I would say that the strength of the cigar is at a medium level and the body is closer to medium full. It is a wonderful way to start the cigar and I look forward to the second third. 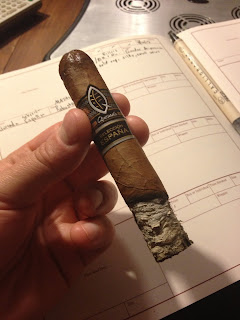 I am in the second third of the cigar now and I am seeing a lovely transitioning in flavors. I would say that the cigar is losing some of the richness and earthier qualities it had before, and it is showing more summer like flavors. There is a nice bit of cedar and lemongrass on the forefront in this third, and it is then accompanied by some hay and woody notes that are more than just cedar like. I am getting some very faint cocoa and spice notes, but it is not as noticeable as it was in the first third. I would say that the strength of the cigar is remaining at that medium level, and the body has shown more medium qualities in this third as well. The construction of the cigar is still terrific and I am getting a razor sharp burn line with an even burn line and beautiful colored ash.

When I get into the final third I get pretty teary because I do not want this cigar to come to an end. I have been loving everything it has had to offer so far and that has not changed now. I am picking up some great tobacco and nutty notes in this third, both new, and they are pairing wonderfully with the core flavors that have been present. There are the terrific flavors of cocoa, spices, cedar and hay, and there is a lovely lemongrass flavor which has been pleasant throughout. That sweet cocoa flavor has been playing off the lemongrass, and it is a terrific pairing. The construction of the cigar remains perfect in the final third and it has a lovely burn line with a solid light gray ash. The body and strength of the cigar when it comes to the end is at a medium level and the finishing draw is cool and flavorful. 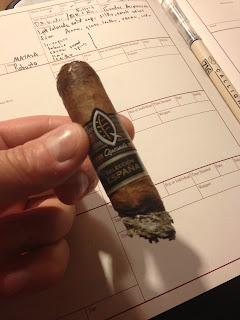 I believe this to be one of the best cigars Quesada has released and it is right on up there with the Quesada Jalapa. I know that the two cigars are very similar, they merely have a different wrapper with the Jalapa being produced because of this cigar, but you can tell the difference in the two cigars. The cigars are smooth and complex while remaining an easy smoke. I believe many cigar smokers could enjoy these cigars, and the more advanced the smoker the more flavors they will pick up. I have not had any other sizes in the line, but I can tell you that the robusto is quite enjoyable. The construction was perfect from beginning to end and the flavors produced were stellar. You can not ask for more in a cigar in my opinion, and that is why this cigar gets a 93 in my book. Quesada is a company that I forget about sometimes, and then I smoke a cigar like this and hate myself forever for not smoking their products more often. Simply a terrific cigar that Spain is fortunate to get. 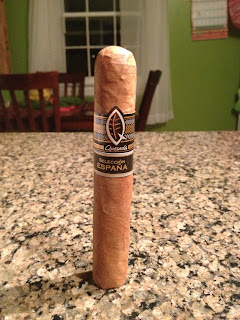