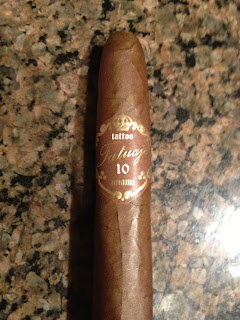 When there is a perfect fire going, why would you add another log? In celebration of the tenth year for Tatuaje Cigars, Pete Johnson decided not to release a ten year anniversary cigar, but re-release the cigar that got him where he is today. Yes he made some slight modifications to the cigar, but as he said himself, "when you have a blend like the Brown Label, why fuck with a classic?" The cigar features a "packaging update" most of all, but he is releasing some line extensions with that. The cigar has a new band that is quite flashy when compared with the original Seleccion de Cazador/Brown Label band, and has a closed foot as well. The boxes themselves were modified as well, but all of that is for this year only. In 2020 the packaging will return to its original design. For the line extensions, one is exclusive for TAA members, and the other two are out and hitting stores. It was pretty obvious when looking at the new vitola offerings what would grab attention, and that is why I am here today to review that cigar.

The vitola is the Belle Encre, and it is very similar to the Habanos S.A. vitola Británicas Extra. The vitola for Habanos S.A. is actually a tad bit longer and has a larger vitola in the center. (They have used the size in several regional edition smokes) Belle Encre, which is translated as beautiful ink, measures 5 3/8" with a 42 ring gauge. The cigar is made at My Father Cigars S.A. in Esteli, Nicaragua, and is the same blend as other Brown Labels. The Seleccion de Cazaor line utilizes an Ecuadorian Habano wrapper and has Nicaraguan tobacco in the binder and filler. The wrapper has a very faint Colorado coloring and shows a nice marbled difference between Natural and Colorado. It is very smooth to touch and there are few veins present. It is a beautiful figurado with a great triple cap, and has an aroma of leather, soft spices, barnyard, coffee and cocoa. 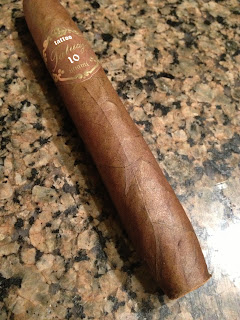 The cigar begins by showing those classic Seleccion de Cazador qualities, but in a new and unexplored way. There are some lovely spice notes, Christmas spices, to begin with, and there are those great cocoa, and earthy qualities as well. It is balanced out with some nice coffee and leather flavors and it is a filling cigar. I would say the strength of the cigar is at a medium level and the body at a medium to medium full quality. I look at the cigar as the "modern day classic," and can be used as a benchmark for many cigars now and in the future. The construction on the cigar is terrific and it has a burn line that is nearly razor sharp, but still solid. There is a nice charcoal colored ash that is pairing with that burn line and it is holding on firmly to the end. Overall it is a nice beginning to any cigar, and I look forward to the remaining smoke. 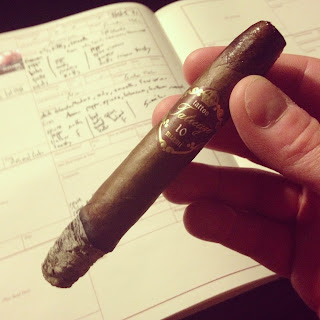 I am in the second third of the cigar now and I am seeing some consistencies and some added complexities. There is that nice Christmas spice present with the cigar that is on the forefront, and it is showing some woody and leather qualities much more so now than before. There are still those terrific coffee and cocoa flavors that have seemed to come together in this third, and this is definitely a complete cigar. There is a nice balance between rich and dry with the cigar and it is a flavor profile I prefer a majority of the time. I would say that the cigar is showing those wonderful medium to medium full qualities in terms of strength and body, and it is a smoke I could have anytime of day, but would smoke more in the afternoon and evening. The construction on the cigar is still phenomenal, and it is producing a solid charcoal ash that is holding on to the cigar firmly. 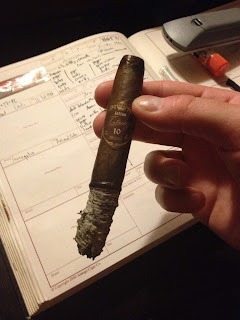 When I get into the final third of the cigar I find the flavors to be increasing in terms of body and strength. There is a finish that shows a rise in leather, coffee and cocoa notes, and there is also a nice increase in the Christmas spice notes. It is not overly strong by any means, but there is a noticeable increase that is very enjoyable. I find it enjoyable, and a characteristic that takes the cigar to a whole new level. It is showing some great cedar and earthy notes as well, and it is a cigar that is balance in all ways. The strength and body in the end are at a medium full level, and it is finishing wonderfully. I personally find the finish perfect, and that is why I have been smoking these cigars back to back. The construction is terrific in the final third, as it has been throughout, and it is producing a burn line that is razor sharp with a beautiful charcoal colored ash. The last draw is flavorful and cool so I light up another one right away. 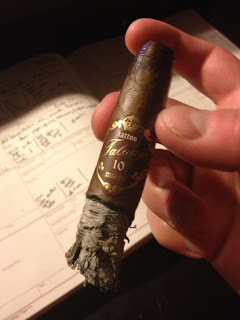 It is always fun to see how a cigar will smoke when you change the vitola offering and this was no exception. The Belle Encre is a nice perfecto that shows some shifts in the ring gauge offering throughout, while providing a smoking experience that shows the terrific flavors offered in a 42 ring gauge cigar. It is always nice to see a solid ash on a figurado because you can see the great curves, and it can show terrific construction on behalf of the manufacturer. This particular smoke had great construction from beginning to end, and showed a lovely charcoal color ash. The flavor profile obviously showed similarities to the original Seleccion de Cazador/Brown Label line, but it is a terrific flavor profile to begin with. The Belle Encre is a nice addition to the line, and while it is not my favorite size in the line, it is still very enjoyable. I give this cigar a solid 91. 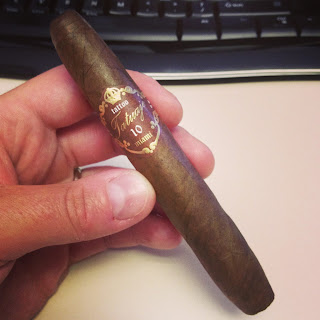