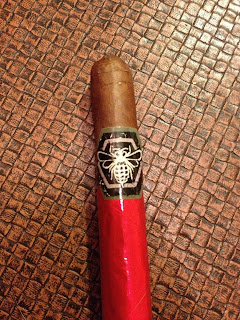 I was going through one of my humidors the other day and was looking at the Viaje smokes I had. After going through them and struggling in deciding what to smoke, the one that caught my eye was the one with the best presentation. I think the Honey & Hand Grenades is one of the coolest and best presented cigars by Viaje. From the entire box packaging to a single cigar, the Honey & Hand Grenades is dope. You should never judge a cigar on its presentation, but we all have to admit that the presentation plays a factor when most individuals purchase a cigar. The cigar has a unique punch at the head which helps reduce a build up of humidity in the tapered foot cigar, and the band is awesome as well. Being a beekeeper you truly appreciate the bee and honeycomb band. I have reviewed The Shiv in the past, but today I will be smoking The Rapier. 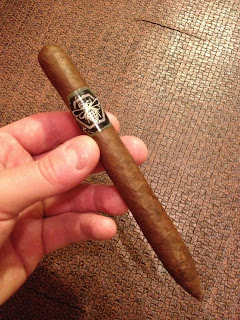 With the length and ring gauge of a Lonsdale, the cigar has a tapered foot earning the title a Curvy Lonsdale.  You can look up the definition on urban cigar dictionary and it will show a photo of this cigar. The cigar measures 6.5" with a 44 ring gauge and is made in the Cuban fashion in Honduras at Raices Cubanas. The cigar is a Nicaraguan puro and features a Criollo wrapper. The cigar has a solid Colorado coloring to it, and it has a nice light leather coloring. There are some present veins in the wrapper, and the texture is slightly rough with some tooth present. It is a firm cigar and the aroma on the wrapper is of tobacco, caramel and spices. I cut the head and a little bit of the foot to get a slightly tight draw. The draw shows some dark chocolate, spice and oaky flavors, and I am eager to light the cigar up. 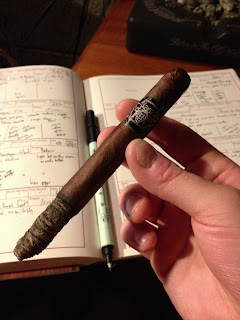 The cigar has a nice beginning and as the tapered foot opens up I begin to get an easier draw. The draw was never a problem, but you are going to have a tighter draw when a cigar starts out in the fashion in which this cigar did. The flavors the cigar are showing some nice honey, dark chocolate and espresso on the forefront, and then shows some nice spices, oak, leather and tobacco on the finish. It is a balanced cigar that shows some nice contracts between sweet and spicy and has a body at an easy medium full level. The strength of the cigar is also at a medium full level, and it seems slightly softer than when I initially smoked the cigar months ago. The construction on the cigar is top notch, and it shows an even burn line that is producing a solid and firm dark gray near black ash.

I am in the second third of the cigar now and the flavors are still pretty similar to the first third. There is a nice mixture of sweet and spicy, and it is showing some espresso, chocolate, spice and oak notes. there are those tobacco notes along with the cigar and it is a nice smoke. It is a good cigar to sit back and relax to in the evening, and I am here smoking it and watching Entourage. The flavors and body are around a medium full to me, and it is a cigar I could smoke in the evening or afternoon. The strength is remaining at that solid medium full level, and I was expecting the strength to rise like in other vitola offerings but it has not. Construction wise the cigar is performing wonderfully and it is showing that razor sharp burn line with a nice dark charcoal ash. 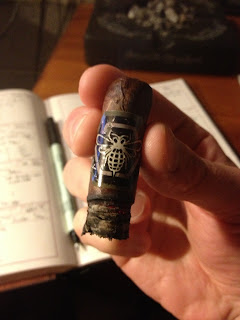 In the final third of the cigar now and I am beginning to pick up some changes now. I would say the strength of the cigar is finishing slightly stronger than medium full, and the flavors are bolder as well. There is a nice peppery and espresso bean flavor in the end, and the dark chocolate has turned slightly bitter. There are still some nice tobacco and oak notes with the cigar, but overall it is a stronger cigar. The body is finishing slightly above medium full as well, and it has a nice bold finish. The construction to the cigar is top notch in the final third, and it has been throughout. The burn line is razor sharp and the ash is that nice dark charcoal coloring. The draw is cool all the way to the nub, and still producing some nice flavors and a lot of smoke.

I found that the cigar produced an enjoyable flavor profile, but it was a little one dimensional throughout. The flavors offered a nice balance between sweet and spicy, and it was a balanced cigar, but lacked some transitions in each third. The size was unique and almost a Lonsdale figurado that allowed the smoker to pick up some major wrapper flavors before the filler tobacco played a part. The cigar kept a smaller ring gauge, so you are going to get a lot of the wrapper with the cigar, but I think overall it is a cigar that does better with a larger ring gauge. I know some guys that are huge fans of this line, and some that are not, and where I lie in all of this I do not know. There are some traits to the cigar that I really care for and some that I do not, but as a cigar it is constructed well and has a nice flavor profile. If anything, the cigar has the coolest packaging, cigar and box, of all the Viaje smokes. I give this cigar a solid 88 and if I come across some in the future I will pick a few up. 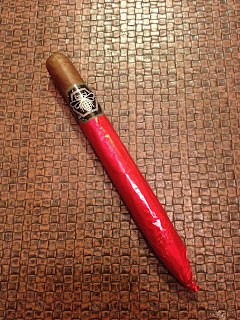