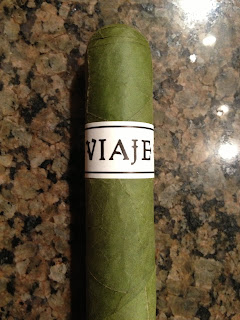 This month is the time of year when manufacturers bless cigar smokers with their candelas. We have seen it just recently with Alec Bradley, seen it with Rocky Patel, and have seen it with Viaje Cigars since 2017. Illusione has candelas as well but they are not seasonal like these. This marks the third year in a row that Andre Farkas and Viaje has released his candela and I have to say that 2018 was a great year. I did not get around to reviewing the cigar till mid June but the cigar was great then and still beautiful in hand. This year's candela is not as green as last years, but is still a fabulously green candela. I had a big discussion the other day with Jose Blanco and Cigar Coop on candelas, and my position on the cigars is that they are great to have from time to time, but I would and do not make a habit of having them around in my humidor other than that. Coop said something along the lines of "great for the month of March," and he is absolutely correct. These will never be a daily rotation cigar for me, but it does not mean they are bad cigars.


Like last years release, the cigar is a Nicaraguan puro and is made in Honduras at Raices Cubanas. This years production is greater that last years as we will see 175 bundles released, and each bundle is 25 cigars. The packaging will be wrapped in green with the same logo from previous years on it. The cigar itself is a robusto in vitola offering and measures 5" with a 52 ring gauge. There is a great triple cap on the cigar and the wrapper shows some veins throughout and is a little gritty to touch. The wrapper is not giving off much of an aroma, little bit of hay, but the foot is giving off tons grassy, manure, barnyard and spicy notes. There is this tiny bit of raisin like aroma showing up as well, but it is very subtle. The cigar offers a nice cold draw that is perfect and the cigar has a nice firmness in hand. 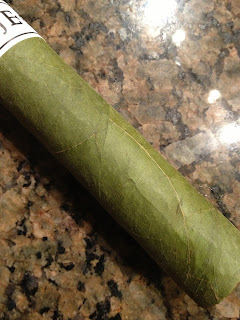 The first third begins much differently than I was expecting. I am not getting a lot of flavors that you find in a candela profile, but it is showing more solid AGANORSA Nicaraguan tobacco flavors. I am getting some nice dry wood notes with bits of coffee beans and leather on the cigar, and it has a finish that is of spices showing bits of black and white pepper notes. Towards the end of the first third I begin to pick up some hay and grassy notes but for the most part it is a candela like no other candela. I think the only way to describe it is by saying it is candela close to those flavors you get with a Colorado wrapper. The burn line is a little wavy in the first third and is producing a charcoal ash that is not pretty and showing some flaky qualities. The strength level is right above medium body in my opinion and is a cigar I could have anytime of day. It's a little bit softer than last years release in terms of flavors but still very enjoyable. 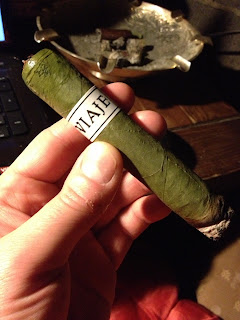 In the second third I begin to pick up some more candela flavors, and those flavors were beginning to emerge towards the end of the first third as well. There is some nice lemony and grassy flavor profile showing up on the forefront, and it has a nice toast and white pepper flavor with that. I am getting some coffee notes still with the cigar and it is a strong candela in the sense of strength. The flavors are really popping on the cigar as well which is making it stand out as a smoke. The finish is that of citrus and coffee notes and very enjoyable. I would say the strength level on the cigar is increasing to medium/medium full level and as I said earlier it's a candela which character. The burn line is still a little wavy and the ash on the end is still that charcoal coloring. Overall there is a nice transition in this third and it is very different from last year's release in this third. 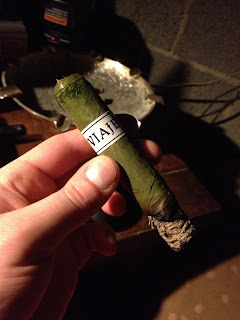 When I get into the final third of the cigar I am seeing a return in the flavor profile that I was picking up in the first third. At this point it is showing less candela flavors than it was in the second third and I would say less than the first as well. There are some great flavors of damp wood, toast and white pepper notes with the cigar predominantly, and I also getting some damp earthy notes with that. There are some bits of lemon and grass with the cigar as well from the wrapper but it is very faint. The coffee notes of the cigar are still present and it has a nice character as a smoke overall. The strength of the cigar finishes at a level between medium and medium full, like the second third and it showed very similar qualities in terms of construction as well. The ash kept that charcoal coloring to the end and a slightly uneven burn line as well. The last draw on the cigar is fairly cool and still showing similar flavors as noted. 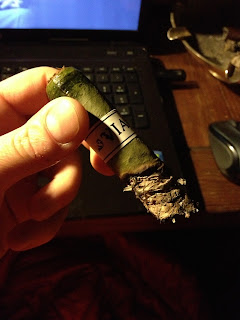 Looking back on the cigar I was very pleased with the finish and thought it had some great flavors throughout. It was fairly different from the 2018 version but just as enjoyable. There are some similarities with the cigars, but the big difference is that this release is more candela like. I think this cigar is solid now and will get better with age and I look forward to seeing where it is in even six months as I think it will make some improvements in that time frame. I had to relight the cigar from time to time and make some corrections which was a pain, and that played an impact on the cigar as a whole, but it made up for those weaknesses in the flavors it had to offer. I liked that the cigar possessed those candela aspects but at the same time had flavors typically not found in candela smokes. Overall a solid cigar and another solid release of a candela this year. I would have to give this cigar an 87 right now, but I believe it will get up to a 90 by July or August. 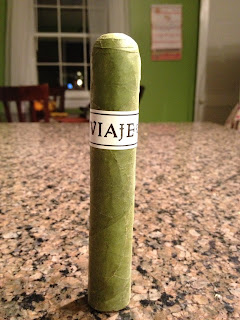