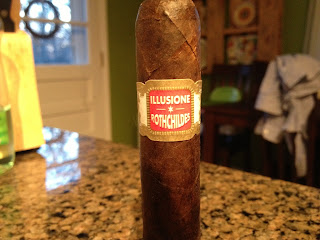 There are two manufacturers on the market right now that are making cigars I love. These guys do not have a blend that I am not a fan of and it is only these two companies. It is very rare that I come across companies like this and when I do they become staples in my humidors. One of these companies is Illusione. I have reviewed almost all of their cigars and the reason for that is that their cigars are incredible. Since coming into the cigar world Dion has produced incredible cigars that are balanced and flavorful. No matter the cigars strength, mild or full in body, he makes an incredible cigar that many can enjoy because of the flavors present with the cigar. When I read that he was going to be releasing a price friendly cigar I was very interested to see how it would be. I never thought his cigars broke the bank to begin with, but a $4 petit robusto/rothschild was just music to my ears.

The last two releases from Illusione and Dion Giolito have been out of Nicaragua and have been made in Tabacos Valle de Jalapa S.A. in Esteli, Nicaragua. This factory is operated by Eduardo Fernandez who is the man behind Casa Fernandez. I originally thought Raices Cubanas was run by Fernandez as well, but Dion informed me that the factory was run by Romai Endemaño. I do not know the exact reasons why Dion is using this factory, but it might be because there are fewer cigar lines being made there and he can get better quality control to the cigar. Raices Cubanas has really blown up lately so this might be an opportunity for him to have more control. Those are just thoughts, not definite facts, but either way the cigars are still made as great as all Illusione cigars. This particular blend features Nicaraguan tobacco in the filler and binder, AGANORSA, and possesses a Mexican San Andrés Maduro wrapper. 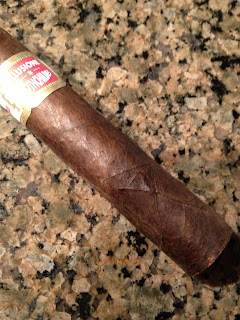 The cigar has a definite chocolate bar coloring to the wrapper, and it has some veins and lovely marbled coloring. It is a little oily to touch and between soft and firm in texture. Overall the cigar is not stunning, but the cigar is meant to be pocket friendly and show its strengths in its flavors. The band does bare similarities to the Henry Clay cigar band with having some Illusione characteristics of its own. The Rothchildes measures 4.5" with a 50 ring gauge and has aroma that has some sweet notes that you find with cocoa and earthy flavors, and also has some spices present with that. I am getting some nice barnyard/manure flavors as well and I imagine this cigar is going to taste as good as the aroma is on the foot. Enough with that though, let's get the review going.

Lighting up the cigar I am immidiately greeted with beautiful spice and potpourri notes, and there is a also a great amount of cocoa and earthy notes with that. I am picking up some salted wood notes as well and it has a finish that is showing some peanut and almond flavors. Not sweet nutty notes but more roasted characteristics. The burn line on the cigar is pretty even, not perfect, but definitely solid and it is producing a dark charcoal colored ash that is holding on to the end of the cigar firmly. I would say the strength of the cigar is at a medium body level right now and it is a cigar I could smoke anytime of day and smoke back to back. Simply put, this cigar is awesome and a great new blend from Dion. 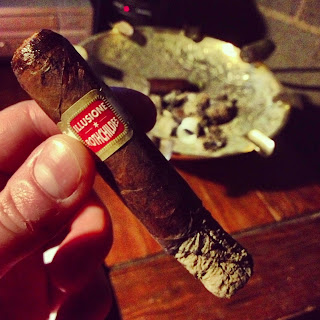 In the second third of the cigar I begin to see some more complexities with the cigar and I am picking up some leather aspects to the cigar with some subtle vanilla and chamomile notes. There are still lots of cocoa and lovely spice notes with the cigar but it has really reached a whole new level in terms of flavors. The salted wood and nutty notes are on the finish and it is producing a great amount of smoke. The burn line on the cigar is still slightly wavy, but that ash is firm on the end and keeping that charcoal coloring. It is a firm ash that holds on well and shows no flaky notes and this is just a great smoke. I am still saying the strength level is around a medium in body, and I will be smoking a lot of these cigars  in times where I need a shorter smoke and just when I want a couple great smokes back to back. 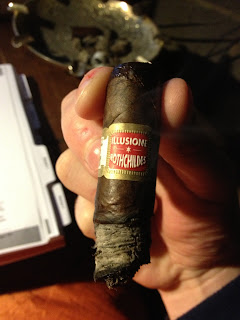 I am in the final third of the cigar now and just now I am realizing that I have not been saying how creamy this cigar is. The cream notes really pair with the cocoa and exotic spice flavors and it just makes the cigar even more complex. There is a nice return of the woody and peanut/almond flavors and it has a terrific finish. It is holding on to that medium body strength level still and it has not veered in that sense since I first lit the smoke. The burn line has gotten a little bit better in this third and it is still showing that charcoal colored ash that is firm on the cigar. The final draw on the cigar is cool and producing a great amount of smoke that is great for rings. Immediately after smoking this particular cigar I light up another and that was the case in the past three I smoked, I just can not get enough of them. 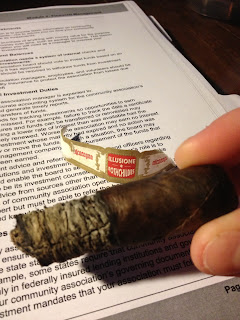 Round of applause should go out to Dion for this cigar. It has tons of flavors, great construction and is just an amazing cigar in every other category. I don't care about the price on a cigar when reviewing, but the fact that the cigar is only $4.00 is incredible. This cigar rivals cigars that are three times that in price. Dion is one of the guys that does wonders with cigars and this is another great example of that. I believe this to be his best release since Epernay La Taureau, and I know for a fact that these cigars will do incredibly well. If you are looking for a terrific cigar that you can have everyday at anytime then look no further than this cigar. I am giving it a solid 93 now and I think it will continue to be terrific in time. It is a great use of a Mexican maduro wrapper and I am glad that the cigar is meant to be like this. It is not meant to be with a natural wrapper or in different size offerings. Terrific job Dion, terrific job. 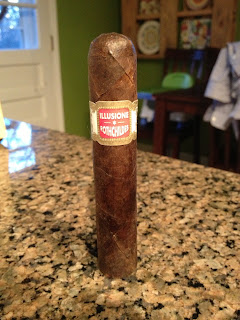