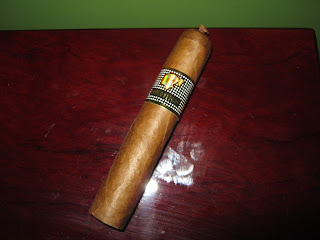 Yesterday I smoked the Behike 54 and it was an amazing smoke. Before I lit up the 52 today I was not expecting to have a smoke with more flavor and depth. I was wrong. Physically, the difference between the 54 and the 52 is the size and length. Measuring 4 3/4" with a ring gauge of 52, this cigar is a little bit bigger in girth then your typical robusto. With the 52 ring the cigar offers a very cool and smooth draw throughout. Similar to the 54 there are lots of leather, coffee, spice, and cream notes, but I felt that the 52 was not as peppery and more nutty. This was a very rich cigar and enjoyable the whole way through!

I have yet to smoke the bigger of the three Behikie's but I have to say so far that the BHK 52 is the best so far, but not by much. The truth of the matter is, the Behike line is just phenomenal. There was a lot of hype behind these cigars and they followed through with it. I would not say I was skeptical of the cigars, but was more curious on how good they would actually be. Compared with the 54 it was a less powerful smoke, but more flavorful. I would give this cigar a 96.

Was this the best cigar of the year? I have been looking over the Cigar Aficionado magazine's for 2010, and looking at the cigars rated by them and I would say that the 52 would be probably #1 or #2 for me. Along with that though, the 54 would probably be in the top 25 too. I have smoked a lot of cigar they did, not all, but most and would agree with some of their ratings. However, I have smoked a lot of smokes they haven't and would put those in the top 25, but they are not in national production like Cigar Aficionado smokes. Out of their 25, I would probably only have 9 of those in mine, and a lot of those in different rankings.  The BHK 52 was really a great smoke, and if you ever have a chance to have one, take it! Just make sure it is a legit Habanos!
Email ThisBlogThis!Share to TwitterShare to FacebookShare to Pinterest
Newer Post Older Post Home